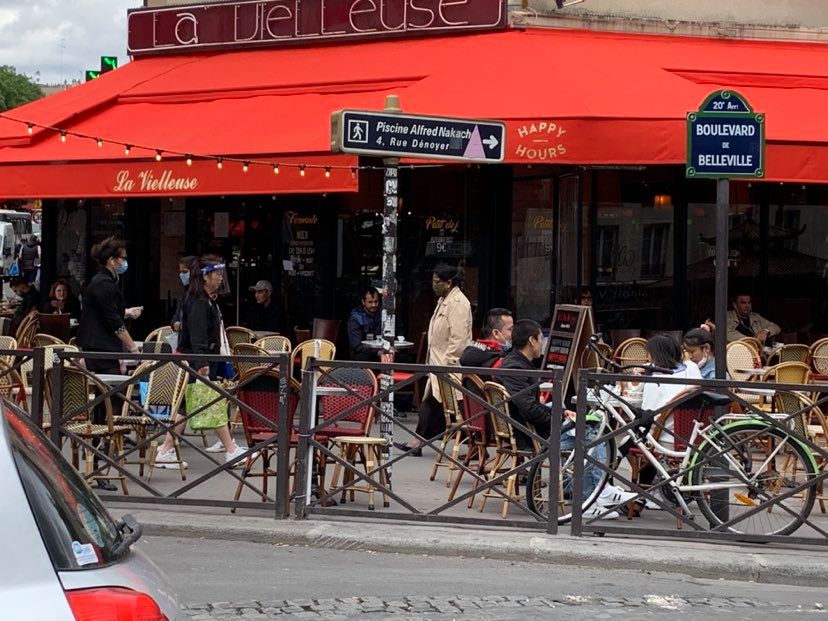 Lunch at a Parisienne brasserie again

BY JUDITH MAHONEY PASTERNAK | I’m writing this at the table where I’ve just eaten my first restaurant meal in three months.

The restaurant is La Veilleuse (the word means “nightlight”), at the corner of the Rue de Belleville and the Boulevard de Belleville, facing the sign for the Belleville Métro station, in my quartier of Paris, a.k.a. Belleville. I’m looking straight at the sign because I’m sitting outside, even though it’s chilly for June — those Paris restaurants that reopened four days ago are so far open only for outdoor service.

Others, including the one that’s been my go-to place for eating out for almost seven years, haven’t yet reopened, and indeed there’s no guarantee that all of them will — some may have suffered irreparable losses from the long shutdown. Eager as I was to eat a meal constructed from a menu instead of in my kitchen, I couldn’t have one in my immediate neighborhood.

But today I had two appointments four hours apart three-quarters of a kilometer from here off the Boulevard de Belleville. If I’d gone home and come back, I’d have had maybe an hour and a half at home before turning around and coming back again. So I decided not to bother and instead to have a very long Chinese or Vietnamese first lunch out somewhere in this busier end of Belleville, at the center of the city’s smaller Quartier Chinoise. The larger one is on the Left Bank, in the 14th Arrondissement. (The arrondissements are the 20 numbered administrative subdivisions of the Paris municipality; I live in and am writing about the 20th.) But none of the places where I usually eat are open yet either. So here I am, just having eaten actual but subpar French food, at this corner table in the sidewalk cafe part of La Veilleuse.

The tables, by the way, are much closer together than the three meters that constitute social distance here; we all seem to have decided collectively that we don’t care. We went three months without that vital component of French life, company across a table, and we’re not going to let a few centimeters keep us from it now. But I did ask the young man at the next table if he’d put his backpack on the chair closer to me and sit on the further one. He didn’t move, just grunted and, turning his back, kept talking on his mobile. As I’ve said, social distance isn’t a 20th Arrondissement strong point — not even for me, apparently.

The food itself rather left something to be desired. They’re not cooking to order yet at La Veilleuse — they have three dishes, already prepared, and I had to choose between lamb with frites (French French fries aren’t called French), chicken with pasta, and, I think, a salad. I picked the chicken, which turned out to have been kept too long under a warming lamp and was dried out. The sauce for the pasta, however, was wonderful.

But here’s the French idiosyncrasy that makes eating and drinking in public establishments here radically, almost unbelievably different from doing the same thing in New York City — even more different than the food does: When you sit down in a French cafe or restaurant and order anything, from a single cup of coffee to a 10-course dinner, the table is yours until you decide to leave. Period. No one will ask you to leave. No one will hover around waiting for you to vacate the table so another paying customer can take your place. Waiters don’t bring the check until you ask for it, and then they take their own sweet time — if you’re in a hurry, best to tell them in advance.

That “until you decide to leave” encompasses whatever you choose to do while you’re there. Now, in the 21st century, you can talk on your phone or play games on it; or work on your laptop or play games on it. Or, in centuries past, you could draw, as thousands of French artists, famous and unknown, did. Or write, of course. In the early 1920s, the young, unpublished Ernest Hemingway was too poor to buy wood to heat his studio and used to write entire short stories over a single glass of wine at the Closerie des Lilas at the edge of the Latin Quarter on the Left Bank (Paris south of the Seine).

I had hoped to do just that — that is, write not a short story, but this piece, about my first restaurant meal in so long. Leaving this morning, I had thrust a pad of writing paper in my bag (I don’t have a laptop right now), so I could use the time between the two appointments to write. But I wasn’t at all certain if the privilege would obtain now, when the cafes and brasseries, closed for so long, can serve far fewer customers at a time. So when I ordered my lunch, I asked the waiter if it would be all right if after I ate, I sat at the table and wrote for a couple of hours. He seemed surprised by the question, gave a Gallic shrug and said yes, as if there could be no other answer. Then he brought my lunch, and after that, left me alone for a couple of hours.

When it was time to leave for my other appointment, I waited for him to appear outside, caught his eye, and made the universal sign requesting l’addition, the check. It was for €15 (about $17), a little pricey given the quality of the meal, priceless for the time spent at the table. I handed him a €20 bill and waved away his attempt to give me change. He was astonished. Tipping is optional in France, as in much of western Europe, and rarely over 10 percent when it does happen. When I first lived here, my friends would take my New York-calculated tips off the table, hand them back to me, and say with some scorn, “We pay our waiters here.”

So he thanked me. I thanked him. We each said the was other was “très gentil”/”très gentille” (very kind), and I went on about the day’s other business, buoyed up by the start of the return to that face, at least, of normal Paris life.

None of this is to suggest that “normal Paris life” floats on a cloud above the stresses and tensions that are so terribly ravaging the United States right now. They exist here, too, only in a vastly lower order of magnitude. Earlier this week, there were protests here in solidarity with U.S. Black Lives Matter protests against the murder of George Floyd and so many others.

And on Tuesday evening, police used tear gas and rubber bullets to disperse a large demonstration in a poor quartier at the northern edge of the city, citing the coronavirus emergency rules banning gatherings of more than 10 people.

Large demonstrations, not infrequently numbering in the hundreds of thousands, are a constant in France and in Paris, and the Gilets Jaunes (Yellow Vests) movement has been a thorn in the Macron government’s side for going on two years, and those demonstrations have also been teargassed at times.

But those protests don’t roil the entire city. They tend to occur in the center of the city, around significant monumental sites, like the Place de la Bastille and the Place de la République. Here in my corner of Belleville, as far as our daily life is concerned, the big news is still that we can eat out again.