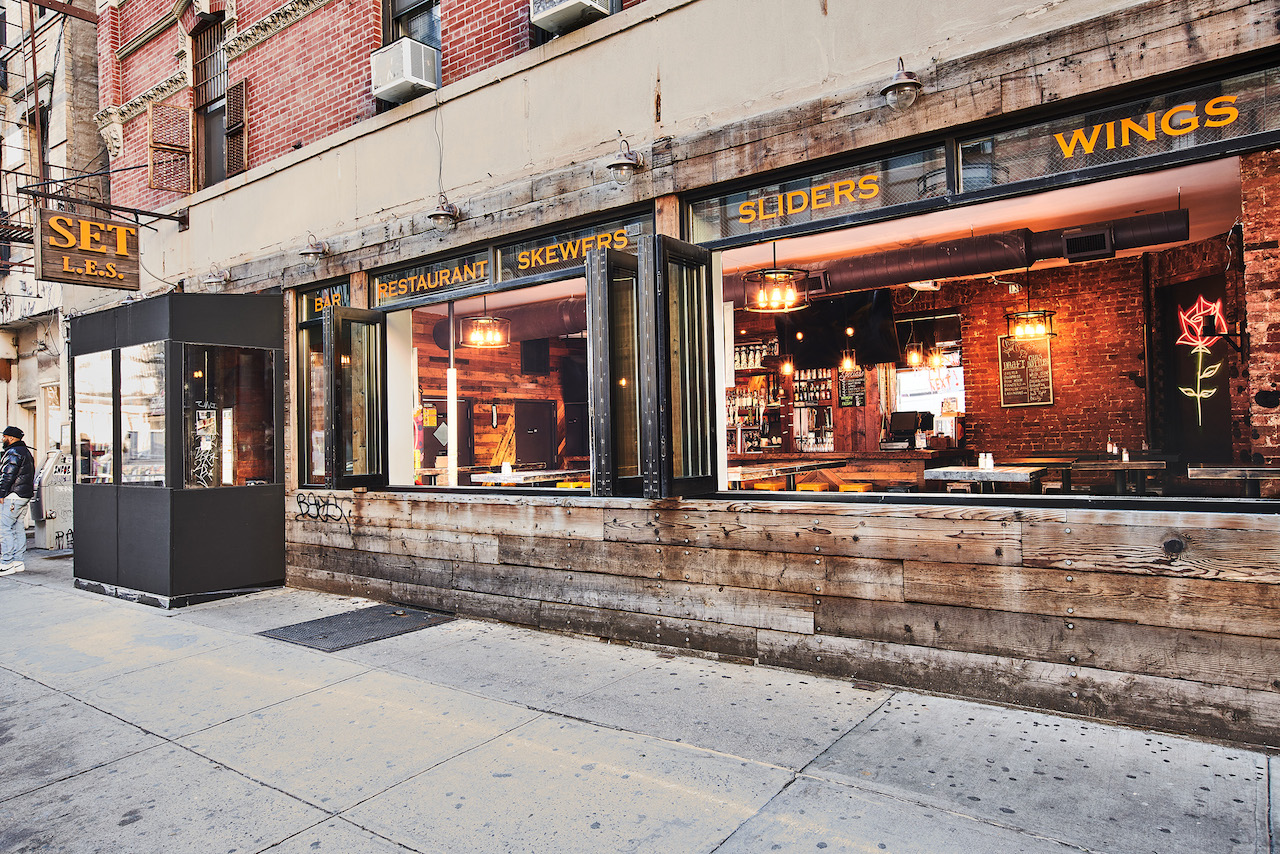 SET-L.E.S. let things get out of control during the pandemic, according to the State Liquor Authority. (SET-L.E.S.)

BY THE VILLAGE SUN | Holy SET!

Showing they’re not playing around when it comes to COVID-19 safety scofflaws, the State Liquor Authority has permanently pulled the liquor license of Lower East Side bar/restaurant SET-L.E.S.

The place’s license was initially summarily suspended on Fri., July 24. The day before, S.L.A. Chairperson Bradley had conducted a compliance check of the 127 Ludlow St. watering hole, reportedly finding eight patrons drinking right in front of it and about 30 more congregating near the premises, all without facial coverings and not practicing social distancing.

The place reportedly was operating “an obvious outdoor, self-service bar from a window — exactly the kind of service the [governor’s] executive orders and S.L.A. restrictions do not allow,” according to a press release Governor Cuomo issued at the time.

The Ludlow St. hot spot was charged with multiple violations, all from July 23, including “failure to comply” with Cuomo’s executive orders, “sustained pattern of noise/disorder,” “failure to supervise” and also “unauthorized trade name.” (The S.L.A. refers to it as SET BBQ Bistro not SET-L.E.S.)

The authority’s report on the bar notes it has no “adverse history.”

On Aug. 12, the S.L.A. convened a special meeting to consider whether to allow a number of establishments to reopen that had recently been shut down during the pandemic for safety violations. They decided, for example, to allow the White Horse Tavern in Greenwich Village to reopen if the owner agrees to pay a $50,000 penalty and strictly abide by the city’s 11 p.m. curfew for outdoor service.

SET-L.E.S. submitted what’s known as a “conditional no contest” plea to pay a penalty of $25,000 in order to reopen. The S.L.A. can accept the offer, reject it or make a counteroffer. In this case, they rejected it, and decided to permanently cancel the bar’s liquor license.

S.L.A. Commissioner Vincent Bradley recused himself from the vote on SET-L.E.S. since he and an investigator from the governor’s multiagency task force visited the bar on July 23 for a compliance check, resulting in the charges against the business.

Speaking at the special meeting, Gary Meyerhoff, the S.L.A. counsel, said SET-L.E.S. had been operating as “basically, a window, no table service, with people drinking on the street. It was basically a stand-up bar.”

Weighing in on the matter during the remote meeting, the other two other S.L.A. commissioners, Lily Fan and Greeley Ford, both simply said, “Counter. Cancel bond.”

In a statement to The Village Sun, William Crowley, the S.L.A. spokesperson, said, “Set BBQ Bistro placed New Yorkers’ health and safety at risk by recklessly transforming their restaurant into an illegal, self-service, outdoor bar that blasted music into the street, creating a nightclub atmosphere with scores of patrons congregating outside the premises during a global pandemic. With no confidence this business will comply going forward, the S.L.A. board voted to reject the licensees’ offer to settle these charges for a $25,000 penalty and countered that it will accept cancellation of the license as a settlement.”

While The White Horse had 30 violations scattered over at least eight different days — ranging from “failure to comply” with COVID-19 safety regulations to “pre-mixing” cocktails — SET-L.E.S. had six violations all on one day.

SET-L.E.S. has the right to a hearing on the charges before an administrative law judge, but the emergency suspension would remain in effect until the case is concluded.