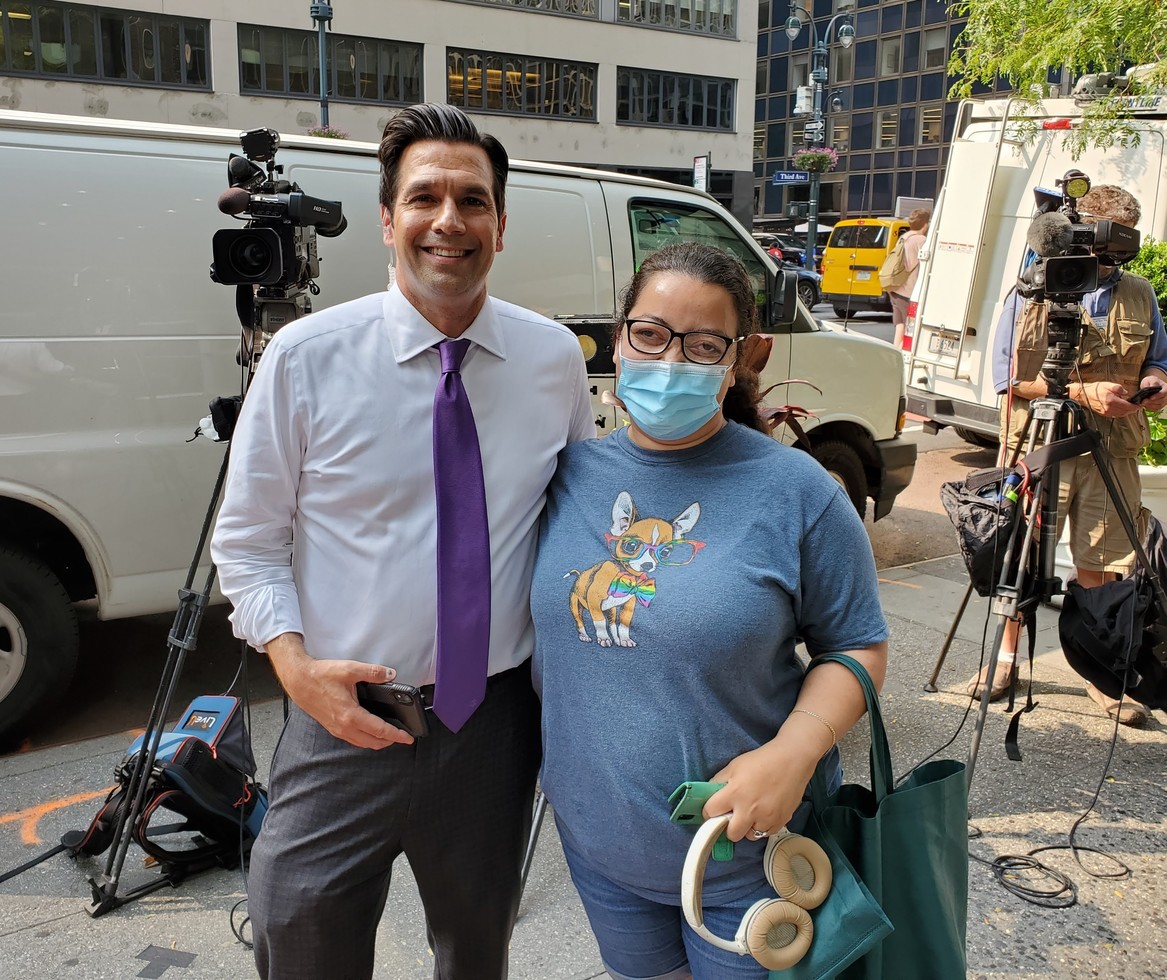 On the story: Noemi Toro with one of her favorite TV news reporters, Zack Fink of NY1, outside the governor's office in East Midtown. (Photo by The Village Sun)

Lots of stand-up after Cuomo says he’s resigning, but the story’s not funny

BY LINCOLN ANDERSON | While many cheered Andrew Cuomo’s abrupt resignation announcement Tuesday, others were still mulling it all over, while some stood by the fallen governor. As you would expect in New York, there was no shortage of different opinions.

That was the case outside the governor’s New York City office in East Midtown on Tuesday afternoon.

Noemi Toro, 37, from Brooklyn, came by to try to catch a glimpse of Cuomo but he had left several hours earlier. The governor had ducked out through a side entrance and driven himself to the nearby E. 34th St. heliport to fly back to the state capital. He was spotted carrying a Dunkin’ coffee cup and boarding a chopper with his former right-hand woman, top staffer Melissa DeRosa, his office director, Stephanie Benton, and one of his daughters, Michaela Kennedy-Cuomo.

“I like him a lot,” Toro said. “He was a good governor — how he dealt with the COVID crisis and the mask mandates. … I’m gonna miss him.”

Such was her love for Cuomo that she said she doubted the 11 women whose accounts of sexual harassment and inappropriate behavior were detailed in Attorney General Letitia James’s report on her investigation into the scandal.

“I think that’s all lies,” she scoffed.

Toro is a big fan of NY1, as well, plus its Albany political reporter, Zack Fink. Fink was on the scene doing his afternoon “stand-up” —  not a comedy routine but TV news lingo for an on-location broadcast. Seizing the opportunity, she strode over and did a brief interview with him.

A masked-up woman whisking into the nearby Docks restaurant through its revolving door, though, had the complete opposite point of view on Cuomo’s resignation.

“I think it’s about time,” she threw over her shoulder.

In his resignation speech, just before he speed off for the heliport, Cuomo ticked off a list of some of his major accomplishments, including passing same-sex marriage in New York State and the Safe Act, a strong gun-regulation law. He also presided over the approval of a $15 minimum wage and consistently on-time balanced budgets. Cuomo touted his track record on infrastructure projects. And, last but not least, he proudly noted how, under his leadership, New York was able to lower its COVID infection rate from one of the highest in the nation to the lowest.

However, a man from Yonkers who works in finance and was taking a cigarette break outside the office building angrily complained there was one big thing Cuomo failed to do regarding the pandemic.

“He should have made people get mandatory vaccines,” he said. “Just like polio, just like everything else. Enough is enough. Talk to the bar owners, talk to the restaurants, talk to the movie theaters who are suffering.”

Cuomo’s resignation is an international news story. In addition to a flock of local media, there was a news crew from Globo, Brazil’s biggest TV network, doing a stand-up outside the governor’s Third Ave. office building.

“We had a similar case there…political…a congressmember,” the cameraman said.

One 38-year-old woman, who works in financial services and did not want to give her name, said she had been giving the issue a lot of serious thought.

“Of course, I always have a little bit of doubt when so many women get together,” she said, referring to the nearly dozen accusers who lodged sexual-harassment accusations against Cuomo. Following James’s report, two more women have come forward.

At the same time, she said, she found elements of Cuomo’s working style with women, along with his touching and kissing of them, which he claimed simply to be culturally Italian, highly unprofessional. She mentioned a recent photo showing Cuomo with a barefoot Benton — who was wearing a skimpy “summer jumper” while typing on a laptop — that was taken next to a swimming pool.

“She’s submissive, sitting on the ground, with her legs open,” the financial woman said, disapprovingly.

The media has had a field day with photos and selfies of Cuomo posing with young aides or young women he met at events. In some cases, he allegedly groped some of the women right before or during the shots or had given them unwanted kisses just beforehand.

“I have no pictures of me with my colleagues hugging,” the woman stated. “No one needs to be hugging their boss. I work with a team of 20 men and they’ve never touched me. I’ve never been hit on. I work in high finance. They’ve gone to good schools. They have wives. And I don’t put myself out there that way.”

Talking it through as a reporter listened, she said, had helped her make up her mind: Cuomo was a harasser and DeRosa and the rest of an inner circle of female “enablers” were to Cuomo as Ghislaine Maxwell was to Jeffrey Epstein.

“I think he is a predator, the more that I think it out,” she said of Cuomo. “He’s a habitual sexual harasser. But it’s, like, where was H.R.? It’s kind of like the whole Epstein thing — he had women protecting him.”