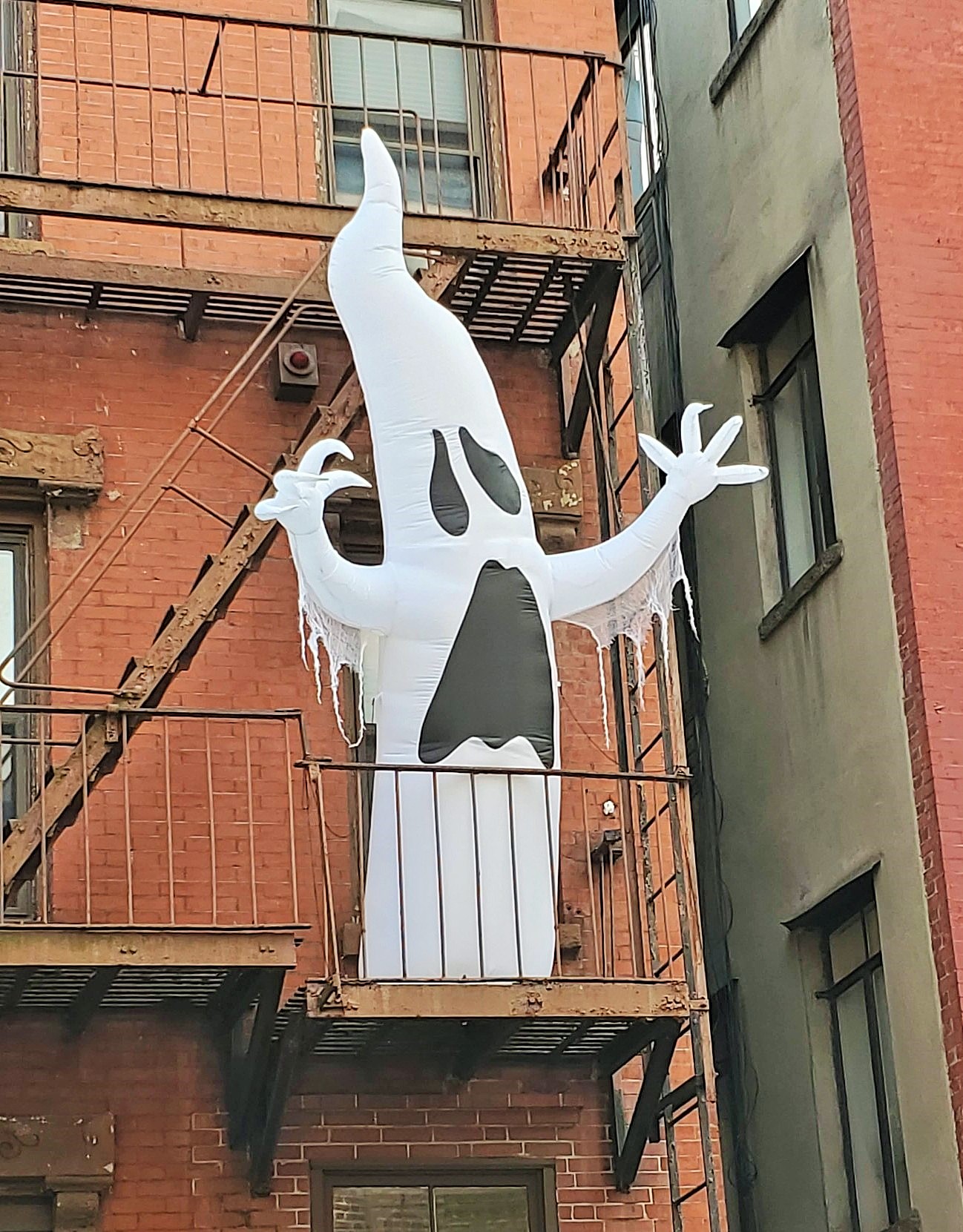 A little old-school Halloween spirit on Downing Street. (Photo by The Village Sun)

BY ART GATTI | It was 1977. My daughter Jenny’s oldest half-sister, Darrow, had married Gregory in 1976, and Jenny had been the fastidious little 4-year-old flower girl at the Grace Episcopal Church wedding, placing each petal individually along the main aisle. All that remained of her legendary moment was the wide-brimmed hat of white taffeta that lay around our place gathering dust.

The fifth annual Village Halloween Parade was just days away and I still didn’t have a costume. Jenny was all set as a princess — a spoiled daughter of royalty who’d gripe loudly about having to wear a fall jacket over her gown.

As I had since the first parade, I’d be with her — albeit not pushing her stroller, but trying instead to keep an eye on her little head bobbing among hordes of similar-sized heads. But as what? I had no costume. I kept staring at that wide-brimmed flower girl hat. It looked sort of…swashbuckling.

There was a week-old half loaf of Zito’s Italian bread in the fridge, too hard to use for anything other than breadcrumbs. But it too intrigued me, because it looked like the nose and mouth of a lion. I studied it, then glanced back at the hat. Bingo! Inspiration! The lion, the swashbuckler — I could be the beast from Cocteau’s “Beauty and the Beast”!

I went to work… . First I pinned together a ruffle collar (sort of the way Arby’s stacks its cold cuts — in ruffles). Then I hollowed out the cut end of the hardened loaf, enough so that I could bury my nose and mouth within. Next, I made a hole on either side of this “mask” and strung rubber bands through them so each side could attach to my ears. That was it — wide-brimmed hat, ruffled collar, lion-like face. Now all I needed was my Beauty.

There, sitting among Jenny’s stuff in the toy chest, was my answer. I snatched it up.

On the night of the parade, Jenny pranced along with a princess’s magic wand. I followed close behind, wearing a wide-brimmed flower girl’s hat, a ruffled collar and a stale loaf of Italian bread that could be mistaken for nothing else but the face of the Beast of “Beauty and the Beast.”

At the end of my left arm was a hand puppet: Raggedy Ann.

“Mon Bête!” came the equally sorrowful squeak from the left hand. All who beheld this odd exchange were quite touched by the tragic spectacle.

So the yet-to-become iconic Village Parade wended its way from the Westbeth courtyard, along Bank Street, left on Washington and eastward on Bedford. My kid, like all the kids on the parade, would sally forth onto stoops where parents with large bowls were doling out sugary little demon-makers a.k.a. candy.

The 200-strong kid parade passed the Jefferson Market Library — where a giant, hairy black spider was climbing up and down the tower — then ended a few blocks east, at Washington Square Park. There, at the top of the fabled arch, a farmer with an ax chased a man in a chicken costume, and there was an occasional glaring downward by a horrific green witch.

Kids were running wild everywhere, and seasoned parents stood around like boulders as waves of kiddyness swept past them. I was no different.

Soon, Jenny got the message that most of her riotous companions were allowed to eat their candy, instead of letting Mom or Dad ration it out over the week.

So I relented, surrendered the bag of candy.

“Here!” I said with a resignation colored by a grim knowledge of what was to come.

Jenny’s mom, Connie, always referred to candy as “cry food” the Up of the sugar rush, followed by the Down crash shortly  thereafter. Sure enough, it was not more than a half hour later, my princess charge came trudging up to me, thrust the half-empty bag of candy at me and wailed — holding her stomach— “I don’t want to go back to Halloween no more!”

Home was a short trip on Daddy’s shoulders, a quick toothbrushing and a very fast falling asleep.