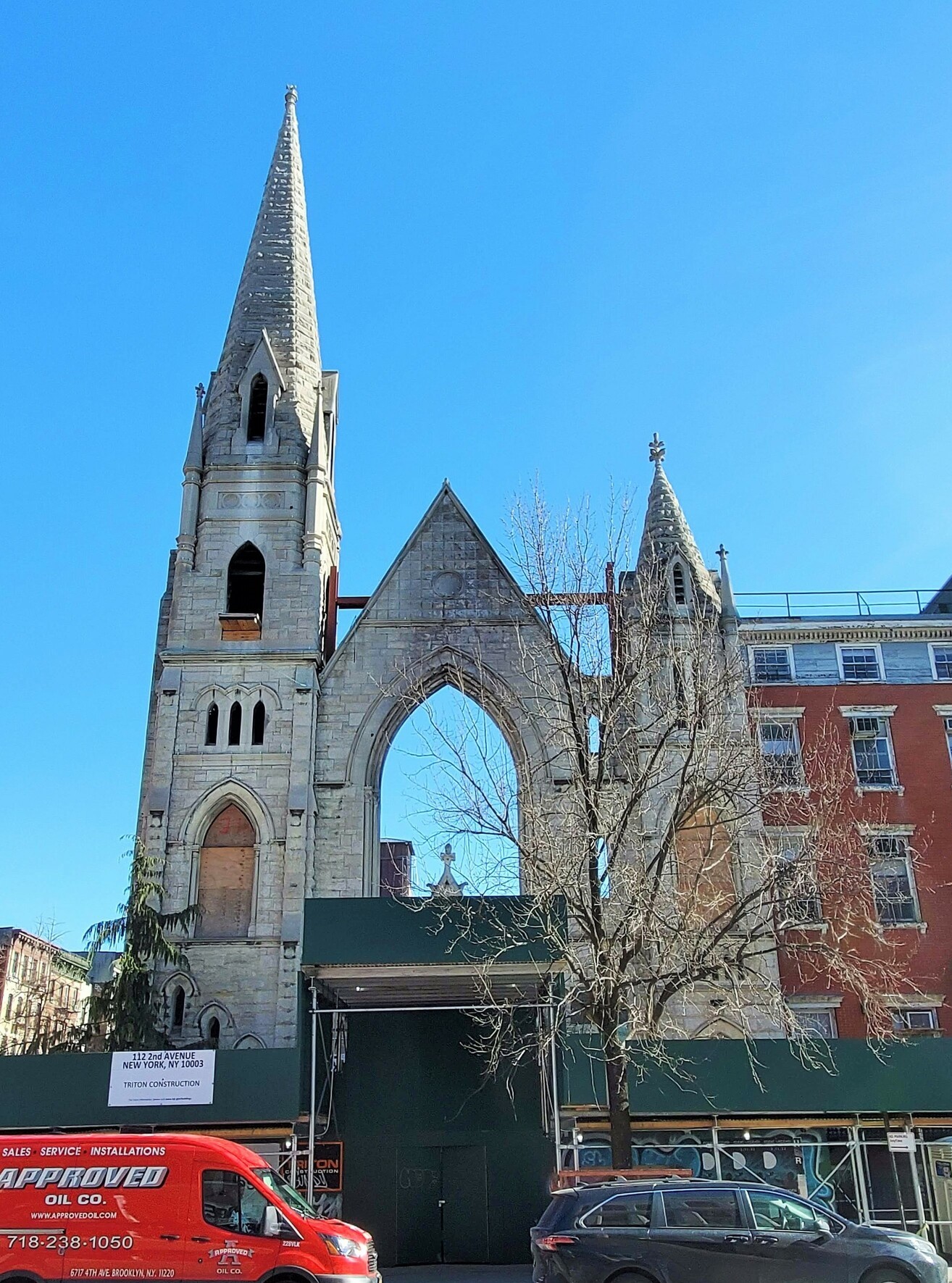 Although its facade is reportedly not at risk of collapse, Middle Collegiate Church has been given the green light to demolish what's left of the structure. (Photo by The Village Sun)

That was the verdict on Tuesday of the city’s Landmarks Preservation Commission regarding the fate of the fire-ravaged Middle Collegiate Church.

The agency’s commissioners voted to approve the church’s application to demolish what’s left of the structure at Second Avenue and Seventh Street.

Jacqui Lewis and Vickie Burns, the church’s senior minister and chairperson of its elders, respectively, shared the news in a celebratory e-mail to the Middle Collegiate community on Tuesday morning.

“In a stunning show of support (8-2 vote) the commissioners agreed that we can demolish the remnants of our facade so we can rebuild Middle Church on our historic site,” they said. “Now we look forward to working with the commission to discern how to use some of the materials from the facade and incorporate them into our new building. Together, we will build something beautiful that is rooted in our values, recognizes our place in the community and complements the historic district,” they said, referring to the landmarked East Village/Lower East Side Historic District.

“The hard work of our team, the overwhelming support of our community, the support of elected officials and some of the commissioners led to this outcome.

“We are so very grateful. And we’re teary. The facade has been a symbol of hope and resilience. Now it is an obstacle to rebuilding. It’s like the fire also consumed that facade, only it did not fall down. The finality of the moment is sad. A reminder of the ongoing grief of the fire.”

The historic house of worship was gutted by a six-alarm fire on Dec. 5, 2020, that had started at a vacant building next door. After the disaster, whether or not to keep the facade became a divisive issue.

Preservation groups, including Village Preservation, strongly supported retaining the church remnant, arguing that, according to the Department of Buildings and an independent engineer’s assessment, it was not at risk of collapse.

“At this point, there is insufficient evidence to state that the structure is other than globally stable and able to be further stabilized through an investigation and remediation,” engineer Erik Madsen reported to Landmarks on Nov. 15.

But Lewis told The Village Sun back then that the structure was not safe and would become progressively more so. She said, in the fire’s wake, the church had already spent $4 million on cleaning up and securing the site, plus investigating the safety of the church’s remaining shell.

“Our engineer says it’s unsafe because it’s deteriorating,” she said.

No other suitable parcels to rebuild on were available nearby, according to Lewis. Basically, for Middle Collegiate to stay in the East Village location, the facade must come down, she stressed.

“It was not our plan, but it feels like the right thing to do,” she said. “My neighbors and our congregation wanted to stay in the East Village.”

At a heavily attended L.P.C. hearing in late November, church members and some local politicians, including Assemblymember Harvey Epstein, advocated for demolishing the church’s remaining walls, while Village Preservation and others urged they be saved.

Andrew Berman, executive director of Village Preservation, gave a lengthy response to The Village Sun when asked about the agency’s momentous decision. He warned that the ruling represents a dangerous precedent and that there are no guarantees that what gets built on the site will be a church — that the property could fall into the hands of a developer.

“We hope the congregation will rebuild a beautiful building at this site, and intend to continue to offer all assistance we can in helping them to do so,” he said. “We fear, however, that they ultimately may not be able to, or that the Middle Collegiate Corporation, which controls the land (not this congregation) may, in the end, not support doing so, and the land cleared of the church facade will be that much more appealing to a developer to construct a very different type of building here.

“The approvals granted by the Landmarks Preservation Commission included no requirements or guarantees that the church rebuild here once the historic structure is torn down,” he noted. “And, concerningly, the commission’s decision was based upon what they say was a new evaluation by their engineer which contradicted what was stated in his original report shared with the public. And yet in spite of repeated requests, the commission is yet to make that new evaluation available to the public to see or review prior to this decision being made.

“We share the concerns expressed by the members of the commission who voted against the approval that there were, in fact, viable and reasonable methods for saving the facade that were not being considered. We are also worried that the decision being rendered, in the manner that it was, weakens the landmarks law, and sets a troubling precedent that allows developers in the future to successfully argue for the approval of demolition of landmarked structures based upon far-from-conclusive evidence offered by hired consultants, for purposes much less desirable than those Middle Collegiate is seeking here.

“That’s why we urged the commission to instead require that the application be heard as a hardship case, wherein the church could argue that maintaining the facade was infeasible for them given their mission and limited resources, and a judgement could be rendered on that basis and specific to their circumstances, rather than in this manner, which may have far-reaching consequences well beyond this site and case.

“We wish the congregation well and remain committed to helping them in whatever way we can to rebuild and thrive here,” Berman said. “But we are troubled that this decision by the commission offers no guarantees that this will happen, and may open the door to more demolitions and much less desirable uses than a new home for a church at this location and other landmarked sites.”

In a statement to The Village Sun, Reverend Lewis said, “We are so happy that the commision overwhelmingly recognized that the facade had no real relationship to the historic district-designated building, which was completely destroyed, and that we can move forward with the process of building our new church. They, and the engineer they engaged, recognized that the safety of construction workers and the public has to be a paramount concern. Our loss was irreplaceable but we look forward to a new spiritual home which will also be a great contribution to our neighborhood.”