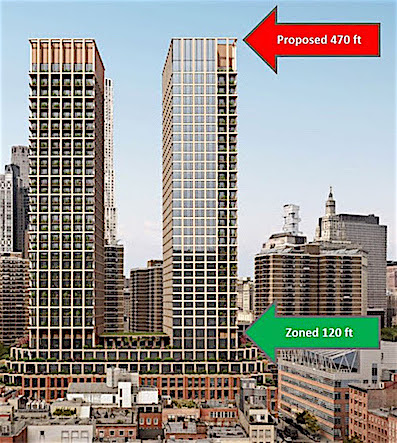 As seen in this design rendering, the Howard Hughes Corporation seeks a zoning change to build a new residential project, 350 feet taller than currently allowed, on a parking lot in the South Street Seaport Historic District.

BY THE VILLAGE SUN | The Howard Hughes Corporation’s plan for two megatowers in the South Street Historic District is not exactly sailing smoothly through the city’s Landmarks Preservation Commission.

On the contrary, on Tues., Jan. 12, the commission chose to take “no action” after its members aired their thoughts and concerns about the HHC scheme to construct the double-tower project at 250 Water St. in the historic district.

Commissioners noted that “nothing outside the district should be inside the district,” referring to the project’s proposed 120-foot height slated for a world-renowned district of low-scale historic buildings. They spoke of how people cross Pearl St., where “the weight of the world is off your shoulders” as they reach the water.

L.P.C. Chairperson Sarah Carroll instructed the commissioners not to consider any extraneous factors — such as the inclusion of affordable housing in the project or zoning — since their civic duty is to protect historic districts and their esthetic and to promote these landmarked districts.

The Seaport Coalition is leading the opposition to the HHC project.

In a press release, the group said, “The Seaport Coalition thanks the Landmarks Preservation Commission for their endurance and their thoughtful consideration of last week’s public hearing where we presented 7,000 petition signatories, about 100 speakers and 200 letters in opposition, in nine hours of testimony to defend the neighborhood where New York began.

“During this global pandemic,” the coalition said, “as we all work at holding homeschooling, jobs and our finances together, we realize that we must stay vigilant as this proposal starts its path to ULURP.”

“We urge you to stand with us, reject this corporate greed, and protect one of our national treasures,” the opponents said. “Not only is the South Street Seaport the birthplace of New York City and New York State, but it is also a key piece of America’s national history!”