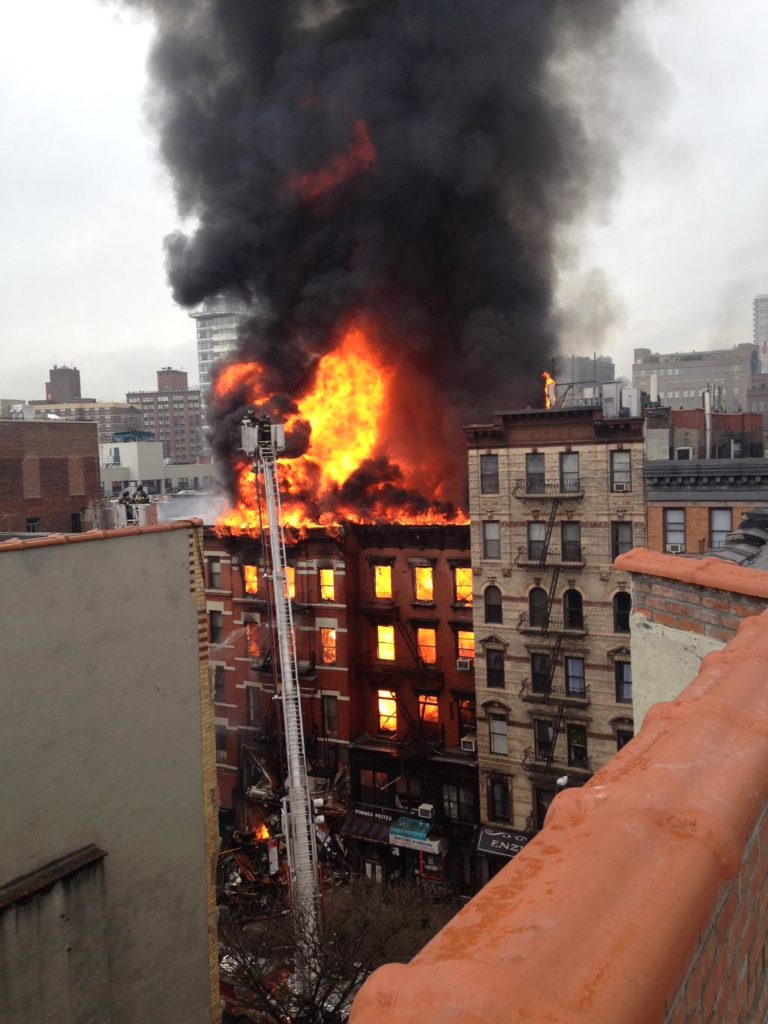 BY LINCOLN ANDERSON | On Friday afternoon, in court at 100 Centre St., the jury found the three defendants in the East Village gas-explosion trial guilty on all charges.

As the verdict was read aloud, family members of the defendants in the 2015 explosion started hugging, burst into tears and dabbed their eyes with tissues.

The top charges, which applied to all three defendants, included manslaughter in the second degree a.k.a. “reckless manslaughter” and criminally negligent homicide. They were also convicted of assault for the 11 other individuals who were injured in the explosion.

The unlicensed plumber who set up the fatal gas system was charged with offering a false instrument for filing in the first degree and falsifying business records because he forged a master plumber’s signature on official documents.

The three defendants were convicted of rigging up an illegal gas-siphoning system that caused the explosion at E. Seventh St. and Second Ave. that eventually engulfed three buildings in a raging fire and caused their destruction.

Figueroa was on a lunch date at Sushi Park restaurant in 121 Second Ave., where Lucon, a Guatemalan immigrant, was working as a busboy.

In addition, 11 other people were injured in the blast. One man, a student from Berkeley who was heading to Pommes Frites, at 123 Second Ave., to get Belgian fries, was hit by  a piece of flying shrapnel and lost an eye. Another person suffered a collapsed lung and a ruptured spinal disc, while the restaurant’s manager was thrown across the street and suffered nerve damage to his ankles. One victim lost a tooth.

The jury heard summations from the defense and prosecution on Tuesday and Wednesday before going into deliberations.

It was a complicated trial, as the 12 jury members were asked to learn about things like uncapped gas meters, fall valves, yellow flex tubing and Con Edison “red tags” (which mean the utility has shut off the gas due to a problem).

But, at the end of the day, the jury came to a unanimous consensus that the explosion had been caused by the illegal gas-siphoning system that had been rigged up to send gas from 119 Second Ave. to four residential apartments at 121 Second Ave. The latter building did not yet have its own legal gas supply. However, Sushi Park did have its own gas connection, and initially, that connection was tapped to provide gas to the residential apartments.

The prosecution argued that the landlord was motivated by greed. About eight months earlier, Con Ed had red-tagged the gas connection at 121 Second Ave. — after finding it was tapped to supply the residential apartments — and, as a result, Sushi Park’s owner and the residential tenants were complaining about the lack of service. The three defendants then devised the scheme of a hidden illegal system to keep the gas flowing to 121 Second Ave.

And despite the lawyer for Hrynenko arguing that the landlord had merely delegated the work to a contractor, who delegated it to an unlicensed plumber, the prosecution effectively proved that Hrynenko was in on the whole shady scheme and fully aware that what they were doing was both illegal and dangerous. Specifically, the landlord was involved in a pivotal meeting in the basement of 119 Second Ave. in early August 2014 — the day after Con Ed had turned off the gas — where the illegal plan was hatched.

“On Aug. 8, the day after Con Ed red-tagged them, they built a gas system,” Assistant District Attorney Rachana Pathak stated in her closing summation.

Text messages back and forth between the individuals show that Ioannidis spent the full day of Aug. 8 setting up the system.

The system was secluded in a back room in the basement, dead-bolted and only accessible from a basement entrance on E. Seventh St., “far away from any regulator’s eye,” Pathak noted.

At one point, she used a “Godfather” analogy to describe Hrynenko’s oversight of the plan.

“When Don Corleone says, ‘Get it done,’ he doesn’t need to know the specifics,” she stated.

On the screen, Pathak also showed the jury a projected image of a check to Ioannidis from Kukic, with the notation “extra gas,” for setting up the illegal system, which she called “perhaps the most damning” piece of evidence.

On the day of the explosion, Con Ed came by for an inspection of a new gas connection to 121 Second Ave., and the three defendants had argued about how to manipulate the illegal gas system to conceal it. They turned off the system and then Kukic knocked on tenants’ doors in 121 Second Ave. to tell them to lie if questioned about the gas.

“If anyone asks, say you never had gas,” one tenant reported the contractor telling her at that time.

The tenant texted her roommate: “The gas inspectors are here. It’s so creepy because another dude is making me say we had no gas.”

Kukic spent the trial wearing headphones, listening to everything translated into Albanian.

Just before 3 p.m., they turned the gas back on. Three minutes later, a Sushi Park employee reported the smell of gas in the basement. Sushi Park turned off its stove, but the gas smell remained. The restaurant’s manager called Hrynenko directly, Pathak noted, stressing that it was then incumbent on the landlord to call 911, but she didn’t do it.

Kukic and Michael Hrynenko, the landlord’s son ran into Sushi Park, then quickly dashed out right again and around the corner to the basement entrance on E. Seventh St., but without alerting anyone in the restaurant of the danger.

“They ran out because they knew something was horribly wrong with their secret system,” Pathak stated. “All they had to do was give a warning: ‘Move out!’ ‘Fire!’ They could have saved lives.”

The gas that built up was leaking out from uncapped meter bars, she said. Shortly after the two men entered the 119 Second Ave. basement via E. Seventh St., the explosion occurred. Michael Hrynenko never stood trial because he died before the court case started. According to reports, he committed suicide.

The defense had tried to argue that the explosion was caused by Sushi Park — also that the main gas shutoff valve was not recovered intact from the rubble of the disaster, so it was impossible to know if the gas was on or off.

But Pathak said, even though only a sheared part of the main valve was recovered, “common sense” should tell one what happened.

“It didn’t start in the [restaurant’s] kitchen,” Pathak told the jury of the disaster’s cause. “They know that and you know that. He knew the valves were open,” she said of the contractor. “That’s why Kukic ran from Sushi Park to the Seventh St. basement.”

In conclusion, she said, “When you illegally tap a gas meter, build an illegal gas system and it explodes and kills people, you are responsible.”

After the trial’s conclusion, the defendants were released. They had been out on bail since after their arrests. They each left the building stone-faced, surrounded by their attorneys.

Sentencing is scheduled for Jan. 10.

In a statement after the verdicts, Cy Vance, the Manhattan district attorney, said, “This is a big win for public safety in New York. As construction and development continues to boom, today’s guilty verdict puts property owners, contractors and managers on notice: My office will pursue criminal charges against those who place expediency and financial gain over life and limb.

“I thank the jury and the tireless prosecutors in our storied Rackets Bureau for holding these defendants accountable for the tragic and preventable losses of Moises Locon and Nicholas Figueroa. I also want to thank the Figueroa and Locon families, who demonstrated remarkable strength and resilience through the duration of this trial.

“While today’s result will not bring these young New Yorkers back, I hope the Figeuroa and Locon families take a measure of comfort in knowing that this case will change the way that landlords and contractors do business in New York.”