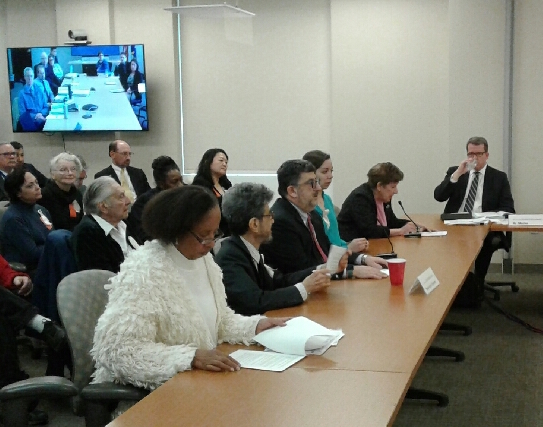 BY LINCOLN ANDERSON | Mount Sinai Health System passed a key hurdle last week in its efforts to get two “certificates of need” to build a new mini-hospital in the East Village and create a behavioral health facility on the Lower East Side.

On Jan. 21, the Public Health and Health Planning Council Committee on Establishment and Project Review voted to approve the new, smaller hospital at E. 13th St. and Second Ave., which would have just 70 beds, along with a behavioral center at the former Rivington House, at Rivington and Forsyth Sts.

The hospital project was approved with the caveat — added after a commission member advocated for it — that Mount Sinai would try to include in it, if feasible, an outpatient birthing center. The birthing center would not be run by the hospital, but by an outside group.

Mount Sinai plans to shut down its Beth Israel Hospital campus in Gramercy and sell the property, but only after the new mini-hospital is up and running — it hopes by 2023.

The healthcare organization plans to spend $600 million on the new mini-hospital and $150 million on the behavioral health facility, as part of its overall $1 billion plan to create what it is touting as a new comprehensive Downtown health network covering from river to river south of 34th St.

The plan for the new hospital features an emergency department with a capacity to serve up to 90,000 patients annually, though hospital officials expect it will probably see closer to 70,000. But the plan’s critics contend the design only looks like it could handle only 40,000 patients a year.

The comprehensive behavioral health center at the former Rivington House would have 115 beds, including 54 inpatient beds, plus other ones for detox and substance rehab.

Between its current hospital and behavioral health facility, Beth Israel is licensed for several hundred more inpatient beds than would be created in the two new facilities. But Mount Sinai contends the number of beds in its plan is sufficient to meet the actual need.

Meanwhile, the new hospital’s E.D. would be physically larger than the one at the existing Beth Israel.

Committee members discussed the overall occupancy rate for hospital beds in Manhattan south of 60th St. and said it currently stands at 48.5 percent, or 1,421 combined inpatients daily at N.Y.U. Langone, Bellevue, NY Eye & Ear, Lower Manhattan Hospital-NewYork Presbyterian and Beth Israel. They noted this figure is lower than for the rest of Manhattan and outside of Manhattan.

A panel of Mount Sinai officials, including Dr. Jeremy Boal, president of the new Downtown health network, presented the plan.

“To be clear, this will be a full-service hospital,” Boal told the committee members. “The new emergency department will be 30 percent larger and can treat heart attacks and strokes.”

Boal said Mount Sinai has recognized there is interest in an outpatient birthing center and is looking into the possibility of having one as part of the new hospital facility. But he said they will only do it if they can guarantee its safety.

But the hospital won’t have a full-bore neonatal intensive care unit, or NICU, which is an inpatient facility.

“We cannot continue to do high-risk procedures in low-volume settings,” Boal said.

At the same time, the hospital officials noted that emergency room visits at Beth Israel have dropped — from 87,000 in 2018 to 81,000 in 2019. They chalked this up to the growth of urgent-care centers and improved ambulatory care.

As for the number of hospital beds in the new facility, Boal maintained, “It became clear to us that 70 was more than enough.”

He said that finding was based on “trends” that they have been seeing. In addition, he said, it’s simply not good for people to spend time in hospitals.

“The longer they’re in the hospital, the more risks they’re exposed to,” he noted.

As for whether the hospital would be equipped to handle an unexpected health crisis — like ebola, or now coronavirus — Boal said you can’t predict everything.

“There’s no possible way or crystal ball clear enough to know what we’re going to face in the future,” he said, adding, “No one in the ’50s could have predicted we’d be facing an H.I.V. epidemic [in the 1980s].”

In response to a question, “Who do you serve?” Boal said Mount Sinai’s largest number of patients, 60 percent, are on Medicaid, meaning they have limited income.

Ann Monroe, a consumer advocate recently added to the commission, expressed concern that Mount Sinai ensure that all its Downtown patients — many of whom are elderly — will know where their healthcare providers are located after the overhaul.

“We feel a tremendous sense of obligation to that,” Boal assured.

Also, although many of the more advanced procedures will be done elsewhere — namely at other Mount Sinai hospitals located Uptown — Boal said much of the care will still be local.

“If you need a liver transplant, the pre- and post-op care will be Downtown,” he explained.

Members of the public who gave testimony outlined the problems with the plan, as they saw them.

Lois Uttley, of the Merger Watch Project, said reducing the number of inpatient beds in Downtown Manhattan is exactly what should not be done.

“This plan does not readdress the healthcare balance — it makes worse an existing problem,” she said.

In emotional testimony, George Capsis, the publisher of the monthly WestView paper, spoke of the importance of having a hospital nearby when his wife became gravely ill early one morning.

“I saw fear in her eyes,” he recalled. “I walked with her two blocks to St. Vincent’s Hospital. My wife was discovered with lung cancer. She was treated at 2 a.m. So, if you want to know why hospitals are important, they serve a community.”

Penny Mintz, coordinator of the Community Coalition to Save Beth Israel, accused Mount Sinai of “manipulating the census” after it took over Beth Israel.

“The doctors were told the hospital would be closing,” she charged. “So they started to flee, as did their patients.”

As for going Uptown to get higher-level services at other Mount Sinai hospitals, Mintz, a Village resident, said, “For me, it’s really difficult to get to 102nd St. on the East Side.”

Similarly, Tess Solomon, a birth equity advocate, said Mount Sinai closed maternity and delivery clinics at Beth Israel some years ago, which lowered the number of births there.

However, Boal later responded that Beth Israel was only delivering “a handful” of babies per day in recent years, with only one newborn from the Downtown area per day.

Susan Stetzer, district manager of Community Board 3 (East Village/Lower East Side), said making older Downtowners travel all around the borough for healthcare is definitely an issue.

“The number of older adults in Community Board 3 is higher than in Manhattan or the citywide rate,” she said. “Transportation is costly for people. Try to get from the Lower East Side to St. Luke’s Roosevelt; I’d be interested to know how people do that with extremely long walks and long waits.”

Lauren Ashcraft, who is running against Congressmember Carolyn Maloney on a socialist platform, said Mount Sinai’s bottom line should not be the deciding factor in its planning decisions.

“Our priority should be the people,” she declared. “It should not be the profits of Mount Sinai.”

Brice Peyre, a representative for Richard Gottfried, the Assembly’s Health Committee chairperson, read aloud a joint statement by about a dozen local politicians.

The pols said they are “opposed to the piecemeal, segmented certificates of need” that Mount Sinai is using to shut down its Gramercy campus.

(That complaint is also the basis for a lawsuit being brought against the Beth Israel closure by Village attorney Arthur Schwartz. Up until now, Mount Sinai has basically been dismantling Beth Israel bit by bit, as it has moved various departments out of the hospital. But Schwartz argues that a full-scale environmental impact statement must be performed.)

“Lower Manhattan has seen a significant and troubling reduction in [health] services in recent years,” Peyre read from the elected officials’ statement.

Where the dollars will go

Village activist and psychologist Gil Horowitz said the whole hospital downsizing plan is all just about the money for Mount Sinai.

“Mount Sinai is looking for a payday bonanza by selling its Gramercy site and then getting an inadequate hospital,” he charged.

But Boal later countered, “We know that the sale will generate less than half of the expense we’re doing Downtown.”

The doctor added that “every penny from the sale” would be invested in Mount Sinai’s Downtown Health Network plan.

In summing up before the votes on the two certificates of need, Robinson, the P.H.H.P.C.C. chairperson, referred back to Capsis’s testimony about what it meant for the Lower West Side to lose St. Vincent’s Hospital, which closed in 2010.

“Mr. Capsis was eloquent,” he said. “Look what happened to St. Vincent’s. It had the opportunity to rebuild. There was a lot of confrontation from the community. They didn’t act,” he said of St. Vincent’s. “Move forward is important.

“Remember St. Vincent’s,” he counseled the committee. “That’s all I would say.”

The committee voted unanimously for both the downsized hospital rebuilding plan and the new behavioral health center.

In a statement afterward, Mount Sinai said, “Today’s meeting with the Public Health and Health Planning Council’s Project Review Committee is another critical milestone in our ongoing effort to transform healthcare for the Downtown community, and we thank the committee for their engagement in this productive and collaborative process.

“It’s an exciting time for Mount Sinai as we move forward with our $1 billion Downtown transformation, including the development of a new Mount Sinai Beth Israel Hospital, which is expected to open in 2023, and a new Comprehensive Behavioral Health Center.

“The new Mount Sinai Beth Israel Hospital will include medical/surgical and critical care (I.C.U.) beds, an operative platform, and a state-of-the-art emergency department where we will provide current services, including treatment of heart attacks and strokes.

“The new Comprehensive Behavioral Health Center, which is expected to open in 2022, will be a patient-centered, ‘one-stop’ facility for the mental health, substance use, physical health and social service needs of our community.

“We look forward to continuing to work closely with the Department of Health, and other state regulators as the process moves forward, including exploring the feasibility of providing a birthing center Downtown.”

Also after the vote, K Webster, of the Save Rivington House Coalition, told The Village Sun that, though her group had hoped to work with Mount Sinai after the health giant bought the former AIDS hospice, it soon became clear Mount Sinai did not want to share space in the facility with a nursing home.

Webster said her focus now is to make sure Mount Sinai will do outreach in Sara D. Roosevelt Park, which has been having a problem with K2 (synthetic marijuana) use, among other things.