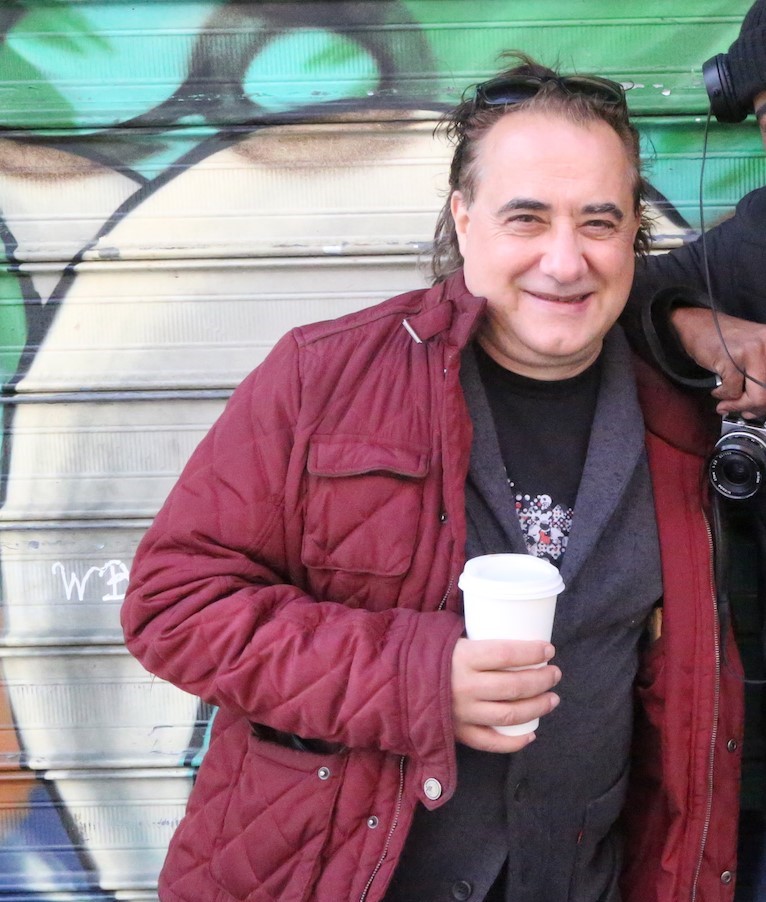 Keith Patchel on the Lower East Side. (Photo by Clayton Patterson)

BY LINCOLN ANDERSON | Updated March 31, 2022, 2 p.m.: Keith Patchel, whose music career spanned from punk guitarist to avant-garde composer, recently died at his building on the Lower East Side. He was 65.

“He was sitting in a chair,” he said. “I think he probably went up there to smoke. Someone saw him on the roof during the thunderstorm.”

Patterson said he assumes Patchel was declared dead at the scene.

Robert Milford, a close friend, said the cause of death was a heart attack.

“Keith had what was described as a massive coronary,” he said. “He was in the habit of smoking cigarettes on the roof of his building since he was on the top floor. He had been smoking a lot more during the pandemic and had put on some weight.  Some are saying we should have noticed that he was a bit puffy, which can be an indication of coronary issues.”

A veteran of Downtown’s rock and punk scene, Patchel was involved in “Field of Fire,” the 1986 second solo album by Richard Lloyd, the former lead guitarist of the seminal band Television. Patchel played guitar on the disc, did some background vocals, assisted with production and also teamed with Lloyd to co-write one of its songs. Patterson said Patchel had been in Sweden at the time and got Lloyd to come over and they cut the album there. Patchel then joined Lloyd on the album tour.

Among Patchel’s other accomplishments, in 2015 he composed the “Pluto Symphony” for the Hayden Planetarium, which was an official selection for the nomination of the Pulitzer Prize for Music that year.

Patchel also headed the MARSBAND, whose music, live and recorded, accompanied the Hayden Planetarium’s Mars show by Carter Emmart, the director of astrovisualization at the American Museum of Natural History.

In 2016, Patchel produced his chamber opera “Plain of Jars,” about the U.S. bombing of Laos during the Vietnam War, at the Medicine Show Theater and also in New York University’s Black Box Theater as part of the Impact Festival.

Patchel was the composer in residence at the MusEdLab, a N.Y.U. music education software development initiative.

The documentarian noted that Patchel was an NY Acker Award winner and also once performed with Bob Holman at the HOWL! Festival in the East Village, doing a slide show as the poet read. Patchel also played guitar before some of the NY Acker Awards events, including once each with the MARSBAND and Gryphon Rue.

A music scholar, Patchel contributed an insightful article to Patterson’s New York Tattoo history book, writing about the avant-garde music of Richard Tyler a.k.a. Rev R. O. Tyler. Comparing Tyler to John Cage, Patchel was the first to profile the late mystic, musician, tattoo artist and artist in this way.

Patchel had a music recording studio on Ludlow St.

For years Patchel had a roommate named Chris, but he was not living there at the time of the composer’s death, according to Patterson.

“He was a quiet, private person, so not many people got into his world,” Patterson said. “But he knew a tremendous amount about avant-garde music, rock and roll, punk, and he was classically trained at Buffalo and Juilliard.”

He said Patchel also was “a big part” of Jump Into the Light, a virtual-reality arcade and studio on Orchard St., noting, “he did performances there, music there. He was a member of Ludlow House,” he added, referring to Soho House’s private members club on the Lower East Side.

Patchel was also proud of a software system he created called Plinkout, a tool to help young music students learn music through colors and patterns.

This obituary incorporates much information from Clayton Patterson’s April 7, 2020, profile of Keith Patchel in The Village Sun.