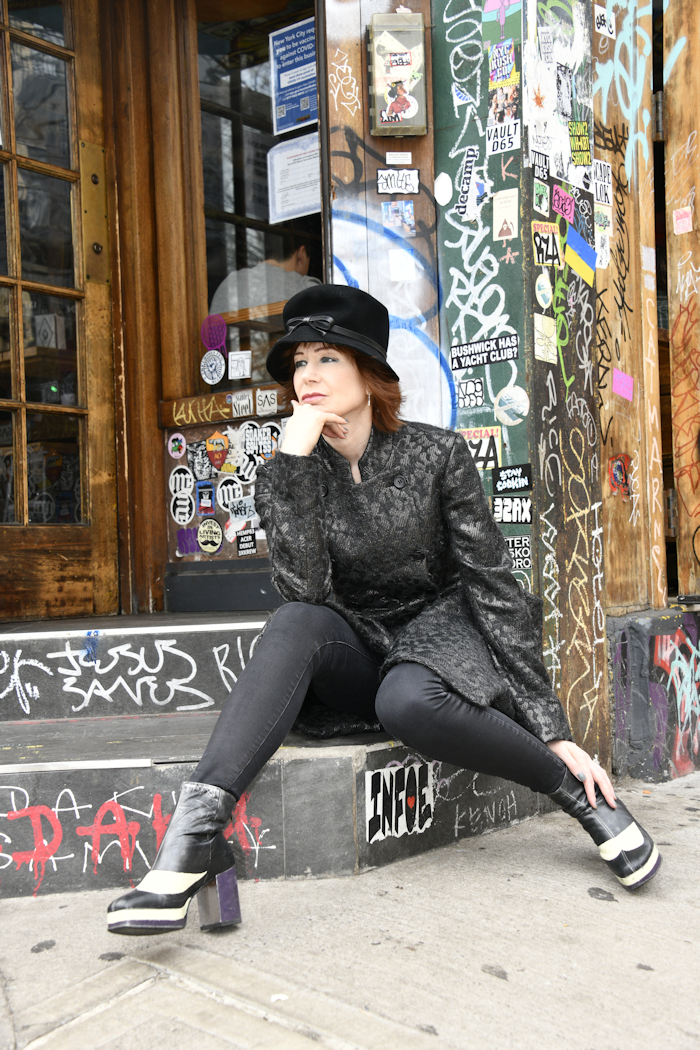 BY KAREN REMPEL | This corner is obviously the coolest spot in New York City! I’m sitting by a graffitied doorway at the corner of St. Mark’s Place and Avenue A.

It looks like the bar might be deserted, but if you peek through the window, there’s a guy chowing down on tacos. Classic rock (the Rolling Stones’ “Can’t You Hear Me Knocking”) is pouring through the open windows and the wooden tables are suitably ringed with draught beer marks.

The bar is called Empellón Al Pastor, across the street from Tompkins Square Park. According to Ada Calhoun, writing in the Guardian in 2015 — but I think it holds true to this day — the coolest street in the country is St. Mark’s Place in the East Village, which stretches for three blocks from Third Avenue to the park. Shh!! Don’t tell anyone.

In fact, across the street is a “secret” speakeasy called Please Don’t Tell. To get in, you have to call from a pay phone inside Crif Dogs, the subterranean hot-dog stand next door. More famously, Debbie Harry lived across the street, and Led Zeppelin shot their “Physical Graffiti” album cover on the block, a few doors down from the bar, at 96 and 98 St. Mark’s Place.

My boyfriend, Mick Jagger, sat on a stoop on this block in the Stones’ “Waiting on a Friend” music video. Keith Richards swaggered through crowds on the sidewalk to meet him there, and they monkeyed up the street to St. Mark’s Bar and Grill (now stripped of history and called Bar Lula). Ronnie Wood was already inside, smoking a cigarette with another stuck behind his ear — remember smoking? The bartender was ready with a beer for Keef, and Charlie and Bill were joking around a few stools away. After a few swigs they all went to the back of the bar and picked up their instruments to play. This song was one of the biggest hits on “Tattoo You,” in 1981. This great Wikipedia article shares Mick’s story about how Sonny Rollins played sax on the track, to their delight and surprise.

“Tattoo You” is my favorite Stones album of all time, maybe because it came out in real time for me. I turned 16 that year, a few months after the album was released. A girlfriend I worked with at Wendy’s in Vancouver gave me “Tattoo You” for Christmas that year. I have literally listened to this album hundreds of times in the four decades since then.

When I was a 15-year-old dreaming about Mick in my basement room, I had no idea I’d one day be doing a photo shoot on the same block that the Stones walked on while they recorded their first-ever video single for the emerging music channel called MTV. Wow! I could kiss the ground… . If only I could time travel back to that day… .

This is the wonderous thing about New York. No matter what block you’re on, and how ordinary it might look, a history of ideas, people and events is steeped into the asphalt and bricks, waiting to pounce on you.

Although this column ended up being about the Rolling Stones, I hand-painted these boots to perform “Life on Mars” at the National Arts Club, in full Bowie costume! I bought the coat because it reminded me of Bowie’s outrageous “Tokyo Pop” vinyl bodysuit (designed by Kensai Yamamoto for the “Aladdin Sane” tour in 1973), which was displayed on the cover of Time magazine right after Bowie died, in January 2016.