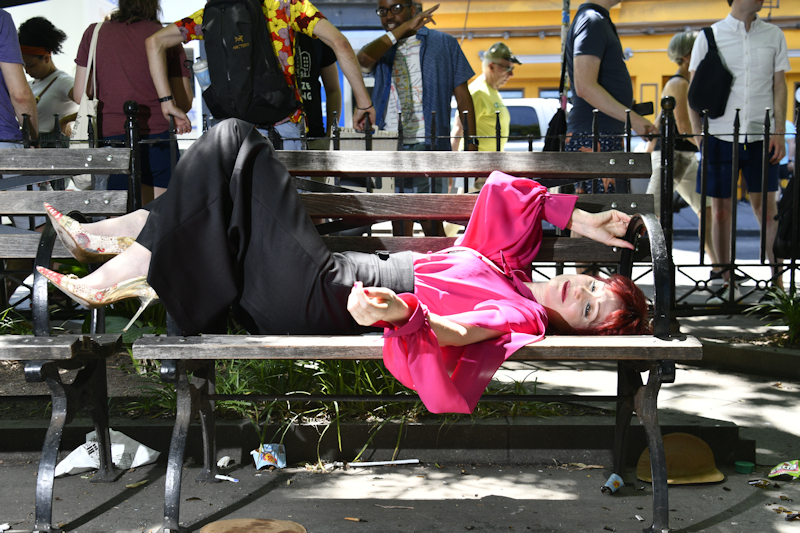 BY KAREN REMPEL | Dear readers, you know that I’m proud to be a New Yorker and I love this city passionately. A couple of Saturdays ago, when we did this photo shoot, was the first time I felt ashamed of my city, and of myself by association.

I had arranged to meet photographer Phil and lighting assistant Amy in Father Demo Square, which is actually not a square but a triangle bounded by Sixth Avenue, Carmine Street and Bleecker Street. The tiny park has one of the loveliest fountains in New York and usually has a buzzy vibe.

It was a glorious sunny day — the day before the Pride March. There seemed to be a few more people on the street than usual, but not the overwhelming numbers we were expecting. The colors of the rainbow were starting to appear, together with barricades on Sixth Avenue, but the usual buoyant feeling of celebration for Pride was absent.

I joined Amy and Phil in the shade of a tree in Demo Square, and we talked about the news. The Supreme Court had just demolished Roe v. Wade and New York’s long-standing law requiring a special need to carry a weapon. Amy had been at the protest at Washington Square Park the night before. People were stunned, angry and scared.

This impacted our mood, no doubt about it. But as we looked around the square, our dismay and feeling that something is terribly wrong deepened. Everywhere we looked, there was garbage. The trash bins in the miniscule park were overflowing, with more garbage outside of the cans than in. Discarded pizza plates from Joe’s Pizza across the street littered the area, and broken glass made a minefield of the entire southwest corner of the park.

This was the worst garbage explosion I’ve ever seen in the city. It was a disgrace. This is how we present ourselves the day before the Pride March, when we’re expecting thousands of visitors? How is this possible?

Who is responsible? I wondered, as I watched a man carefully place a wrapper on top of the overflowing heap.

Just three months before, Mayor Eric Adams told the Associated Press, “We have to have a clean city, and every part of the city is a reflection of how we feel about ourselves. When our streets are not clean it sends the wrong message.” True that, dude. There’s a big gap here between words and deed.

Our Village community is involved in various efforts to improve the situation. A week after the mayor’s speech, this newspaper reported on Councilmember Erik Bottcher’s big win of extra corner trash-can pickups in Community Board 2, which includes this West Village neighborhood. This win entailed an extra 20 hours of trash pickup per week. A start, but a mere drop in the trash bucket.

We’ve all seen the dedicated, orange-clad Village Alliance workers picking up trash a little further up the avenue. I discovered that their area of coverage ends at W. Fourth Street, a few blocks north of Father Demo Square. If the park was in their territory, I am sure the scene would have been much different.

The newly formed West Village Business Improvement District, established on May 12 of this year, extends to Carmine Street, which forms the top part of the square’s isosceles triangle. The new BID’s top priorities include sanitation and beautification. As noted in The Village Sun, “Helping clean up garbage on the streets will reportedly be one of the BID’s main duties.” That’s hopeful news. If it happens. They don’t have a Web site or contact number yet, so we’ll need to give them some time to pick up steam before they start picking up the trash.

Currently, the Seventh Avenue South Alliance — which is a notch down from a BID as an all-volunteer, donation-driven nonprofit — provides sanitation services along the Seventh Avenue corridor. It seems like Father Demo Square might be part of their territory. According to their Web site, “We have arranged for daily litter pickup and trash can bagging and emptying on 7th Avenue South, Bleecker Street and beyond. Thank you to the NY Sanitation Department for providing garbage bags!”

Ah yes, the New York City Sanitation Department! According to NY1, alternate-side street sweeping is returning to full, twice-weekly runs starting July 5, after two years of running at half capacity. Jessica Tisch, the Sanitation Department’s commissioner, said this sweeping, which can suck up 1,500 pounds of trash in one shift, is “the most effective tool in our arsenal.”

The mayor’s sanitation budget did not include the $22 million councilmembers proposed to support twice-daily corner waste-bin pickup in every district. Maybe the sweepers will pick up the rivers of detritus flowing from the bins.

And then there’s the New York City Parks Department. The “Keeping Parks Clean” — yeah, not quite — section of their Web site says they are proud of the thousands of men and women who are out every day in our parks, making our parks cleaner and safer: “We set high goals for ourselves, and we are proud of the standard that we have reached… . Once in a while, though, there may be litter found in parks, from parkgoers who do not fully understand the importance of cleanliness.” Uh huh. Those parkgoers are definitely a problem! But the bins are overflowing. What are the parkgoers supposed to do?

The Parks site advises, “If you see something, let us know by submitting a service request through 311.” So I did. Perhaps they will respond in time for next year’s Pride March.

Everyone knows trash is a problem, among other serious issues the city faces. It seems many different groups are trying to solve the problem. Here’s a simple suggestion. On a weekend when thousands of visitors are in town for the biggest march of the year — the first in-person Pride March since 2019 — schedule extra trash pickups before the march, as well as after. Duh.

For a fantastic Philip Maier photo of the lovely, 1940s-inspired Engineered by Andrea T ensemble I wore to survey the trash, see karensquirkystyle.nyc.