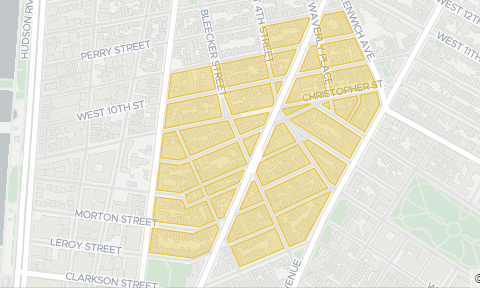 BY LINCOLN ANDERSON | A new business improvement district is being planned for the West Village, but to hear advocates tell it, it won’t be “a monster.”

Helping clean up garbage on the streets will reportedly be one of the BID’s main duties, but also promoting the area’s rich cultural history and possibly even doing walking tours.

The West Village Business Improvement District is currently in the pipeline for approval by City Hall and, ultimately, the state Legislature. Last month, Community Board 2 gave its thumbs-up to the proposal. The BID could be up and running by the second half of this year.

A couple of months ago, Brooke Schooley, who is the point person organizing the BID, gave C.B. 2 a presentation about the new nonprofit. Since 2014, Schooley has been the president of the Seventh Avenue South Alliance, which, although technically not an official BID, provides sanitation services along the Seventh Avenue corridor.

The hope, she said, is that the new West Village BID will make the area “a better place to live, do business and own property.” The initiative has the support of all the area’s business owners and local politicians, according to Schooley.

Basically, as she explained it, the West Village BID will have a significantly smaller annual budget — around $600,000 — than most. By contrast, the existing Village Alliance BID, which covers Eighth Street, the Central Village and Astor Place, has an annual budget of $1.5 million, while the Meatpacking District BID’s is $3 million. Meanwhile, the Times Square Alliance BID’s annual budget is $25 million.

Initially, the idea had been for the BID to have a budget of $800,000. But this was scaled back a bit in light of the ongoing pandemic, with the cuts coming out of planned PR and advertising, as opposed to sanitation, Schooley said.

A BID’s budget — or assessment, as it’s also known — is usually determined by the amount of commercial property and buy-in by large property owners in its catchment area. In the case of the West Village BID area, however, there are not that many large landlords or large commercial properties.

“It was a struggle,” Schooley admitted of the organizing effort. “A lot of these properties are owned by people in Florida. I don’t want to generalize, but we have a lot of absentee property owners.”

She said that while there are about 10 “big owners” in the proposed BID district, there are “others who own less than half a percentage of [the area’s] assessed property value.”

In fact, the impetus for this BID really came from those who live in the area, according to Schooley.

“This effort was started by residents,” she said. “The idea is for residents to have a very meaningful voice on the [BID’s] board, given the mixed-use nature of the neighborhood.”

Commercial properties would be assessed a tax of $1,200 per year. The assessment would be made on owners’ property tax bills.

In terms of outreach, Schooley said everyone in the district should have received a mailer and that there were also fliers posted for two public meetings that were held. She admitted that outreach to residential renters was “less rigorous” since they would not be paying any assessment toward the BID.

Schooley said fears that the BID would radically change the neighborhood are unfounded.

“There’s not the commercial density here that’s ever going to allow the [BID’s] funding to transform the neighborhood into something it’s not,” she assured.

Schooley said promoting the area’s history — and not just its bars — will definitely be a key part of the BID’s mission.

“The Village has a unique cultural history,” she said, “businesses that have been here 30 years or longer.” The idea will be to highlight this history, she said, “not just places where you can get endless mimosas.”

Graffiti removal and rat control are other areas the BID could focus on, she added.

Currently, the BID’s application for approval is before the Department of City Planning. It will then go through a public review and eventually a vote by the full City Council, before ultimate approval in Albany.

David Gruber, president of the Carmine Street Block Association and a member of C.B. 2, is very gung-ho on the new BID, calling it long “overdue.”

“Anybody who walks down Bleecker Street sees the crazy amount of empty stores,” he said. “We have a tremendous sanitation problem. This is a small BID with a very, very, very modest budget.”

Gruber noted the Village is obviously a popular draw for tourists from around the world, as well as around the city and metro area, but that the downside of this is litter and overflowing trash baskets.

“They come, walk around, which is all good,” he said, “but lots of garbage.”

Gruber, for example, lives near Joe’s Pizza. He has tried to help the popular slices spot reduce the amount of trash left by its customers, such as by encouraging them to use bags instead of boxes.

“It’s really like a neighborhood improvement district,” or a NID, as opposed to a BID, he said. “I can’t wait,” he said of the nonprofit’s formation.

Robin Rothstein, another C.B. 2 member, urged Schooley that the BID should work on filling empty, “prime-location storefronts” with merchants who are BIPOC (Black, Indigenous, people of color).

Schooley could not be reached for follow-up questions on the BID plan.

Erik Bottcher, the area’s new councilmember, is bullish on the BID. Speaking at last week’s C.B. 2 full board meeting, he said the new organization will be a big help, especially with sanitation, noting, “That Seventh Avenue corridor gets a lot of wear and tear. That’ll be great for the Village.”

Another immediate, related issue, Bottcher said, is bumping the borough’s number of garbage truck trips back up to pre-pandemic levels. During COVID, he said, trash pickups dropped to nearly one-quarter of what they had been. The amount of daily garbage pickups is now about half of what it was originally, but that’s still unacceptable, he said. Similarly, street sweeping was two days a week before the health crisis but now just once a week. Bottcher is working to restore these sanitation services to pre-pandemic levels.

Rocio Sanz, a C.B. 2 member and the owner of Tio Pepe restaurant, asked him why the district can’t get rat-proof garbage cans. But Bottcher had no easy answers on that one.

“At the end of the day,” he said, “there’s no such thing as a rat-proof can. They are so intelligent and they can get into everything.”