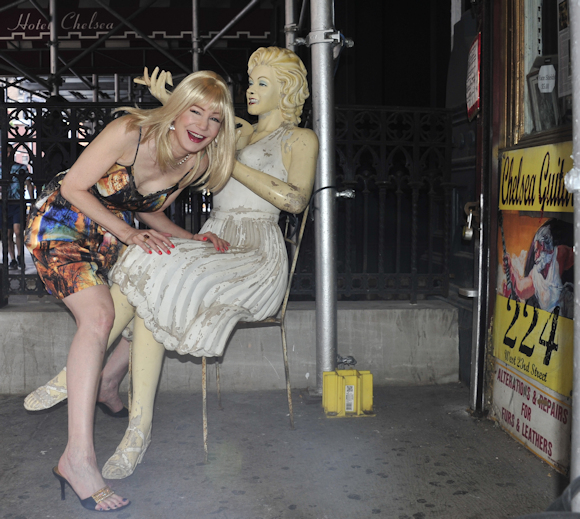 BY KAREN REMPEL | I always have fun on photo shoots for this column, but the shoot outside Chelsea Guitars was exceptionally boisterous.

First of all, my photographer, Phil, encouraged a lot of girl-on-girl action with Marilyn Monroe, which put me in a giddy mood. Cavorting with a ukulele-playing Marilyn is a blast, as I’m sure many readers can imagine. Being next to the historic Chelsea Hotel added a drop of magic as well. And the vibe on W. 23rd Street is much different than the West Village locales where we usually shoot. The passersby are more diverse, and are dressed even more outlandishly than me.

For example, take Seth Lipscher — garbed head to toe in leopard print. I kid you not! His outfit reminded me of an amazing leopard-bomb event I once went to at the National Arts Club, where 200 people were dressed in this much-loved animal pattern. Spotting a costumed creature unloading musical instruments from a shiny red van immediately amped up the excitement of the shoot. Meanwhile, we were reverbing that excitement right back, and he said, “There’s always something going on at the Chelsea!”

I asked Cody at Chelsea Guitars who that man was. Obviously, a band was unloading their gear after a show, but I didn’t recognize the dude in leopard with long curly red hair.

“That’s my friend Tim,” Cody said. He thought I meant Tim Sullivan, the surfing lead guitarist of The Supertones and a resident of the Chelsea Hotel since 1982. However, being fascinated by the fabulous leopard suit, I didn’t mean Tim, who was also unloading gear but was clad in more quotidian attire.

But some diligent research revealed all. The Supertones are a surf-rock band and an underground New York staple, with numerous recordings including their most recent release from 2019, “Unknown And Other Hits From Outer Space,” featuring a couple of surf covers of my favorite Bowie tunes! Seth Lipscher is the band’s rhythm guitarist, and the leopard suit is his signature look. They frequently play out at the Rockaways, and I overheard Tim telling another Hotel Chelsea resident that they were playing at Beach 86th Street. Now that would be a show to see! Note for bucket list.

Chelsea Guitars and the Chelsea Hotel

I circled back to Chelsea Guitars a few days later to speak with Dan Courtenay, the owner. There has been a music store in the Chelsea Hotel since 1908, and the 30-year-old Chelsea Guitars is the latest incarnation. They sell, repair and restore new and used guitars, basses, mandolins, banjos, amps and, yes, ukuleles.

Musicians from around the world visit the cramped, instrument-stuffed store, and it has been featured in multiple documentaries. This place cares about helping musicians reach their goals and they know everything about the New York music scene. They are now open with pandemic (a.k.a. musician) hours, Tuesdays through Saturdays from 1 p.m. to 6 p.m. and Mondays from 2 p.m. to 6 p.m.

Dan is always up for a chat and a bit of gossip. He said the Chelsea Hotel is restoring its decor to the 1800s, and will have a large open area in the back with entrances to El Quijote restaurant and a bar. Staff at the Chelsea Hotel have said it will be reopening in early 2022.

Dan is an artist as well as a musician, and he studied at the Fashion Institute of Technology. His favorite client was Rick Librizzi, an artist, art dealer and Chelsea Hotel resident who died earlier this year. Rick knew Warhol, Rothko and Pollock, and later became interested in graffiti artists. He taught Dan about art and told him many stories about the intoxicating New York art world of the ’50s. Expect to be brushed by the stardust of history if you cross the threshold into Chelsea Guitars.

This fantastical Dolce & Gabanna party dress is a linchpin to my story of becoming a New Yorker. As I described previously, I saw “Advanced Style” at the 2014 Vancouver International Film Festival, immediately before my first trip to New York that October. I loved seeing sophisticated, outlandish, in-your-face older women voguing on the streets of New York, and I wanted to be part of their world.

The movie featured the Off Broadway Boutique — a New York institution for glamorous vintage clothes — as well as its owner for more than 40 years, Lynn Dell Cohen. Here’s a video clip of Lynn from Ari Seth Cohen and Lina Plioplyte’s fascinating documentary, talking about the thrill of being a woman and expressing one’s unique personal style. Her store became a talismanic destination for my trip, along with the Blue Note, Battery Park and the Bowery.

I was afraid to take the subway my first time in New York, so I took a taxi Uptown to the Off Broadway Boutique on W. 72nd Sreet. I nervously opened the door and entered a bejeweled rainbow wonderland. As I gazed and gazed, drinking in the sensory overload of glamor, a particular dress glowed amongst the splendor. It pulled me like a lure down the steps to the back of the store. I admired the wondrous garment and stroked it. With the encouragement of a striking silver-haired saleswoman, I tried the dress on in an elegant curtained alcove. She helped me zip up the back. Almost. It wouldn’t quite close.

Turning in front of the mirror, I soaked up the beauty of the gown like water in a desert. The feel of the satin on my skin. Dolce & Gabbana! A work of art in fabric. I’d never tried on such haute couture before, and I felt elegant, glamorous and sophisticated. The saleswoman said it would probably fit if I lost 10 pounds. Ruefully, I returned the wearable masterpiece to the rack. Instead, I bought a Chanel-style multicolored silk jacket, and soon after, I returned to Vancouver. But the dress haunted me. It became a symbol of New York, something splendid that I wasn’t quite in alignment with yet.

As serendipity would have it, a friend in Vancouver gave me the book “Younger Next Year,” and I set about changing my eating habits. One night, as I ate my usual huge heaping plate of pasta topped with snowy peaks of cheese, I realized that this was just too much food. I bought smaller dinner plates — a trick the book suggested. And I cut out the starches and cheese. These two simple changes were all it took. I had a strong motivation — I wanted to be worthy of New York, and of the dress! I’m something of a hedonist, and I continued to eat two bars of dark chocolate every day, so I never felt deprived. But by the time I returned to New York the following May, 15 pounds had melted away.

I eagerly returned to the Off Broadway Boutique, praying that the dress was still there. It was! And what’s more, the price had been reduced by $50! I tried it on, this time with a girlfriend to do the zip. It slid up with ease, and in fact the dress was a tiny bit loose. Never mind! An insignificant detail. I bought the dress, and the shoes you see in the photo above, and several other treasures, as well.

I wore the dress to my first solo art exhibit in Vancouver, in August 2015, and again to my first solo exhibit in New York, in March 2020, at the start of the pandemic. This dress is a power garment — strongly tied to my personal history and to wonderful touchstone moments in my life.

The Passing of an Institution

Sadly, when I returned to New York for my third trip in October 2015 — this time for six months to see if I could make a go of New York — Lynn Dell Cohen had passed away and the Off Broadway Boutique was closing.

Many women in the book and movie “Advanced Style” — staff and customers — were gathered in the store, mourning Lynn and telling stories. I bought a copy of the book and the featured fashionistas graciously signed it.

The store had a rack of Lynn’s favorite personal items and I purchased a beautiful red satin, heart-embossed robe (which she wore in the documentary while cooking pierogies for her husband!), as well as a full-length glamorous black lace negligee. I treasure these items, too, connections to a special woman who created a wellspring of glamor that spread out onto the streets of New York and inspired the world.

For more fun Philip Maier photos, including a glimpse of the man in the leopard suit, go to karensquirkystyle.nyc.

⦁ Pearl necklace with onyx and crystal beads. Handmade by the writer with pearls from my mother.