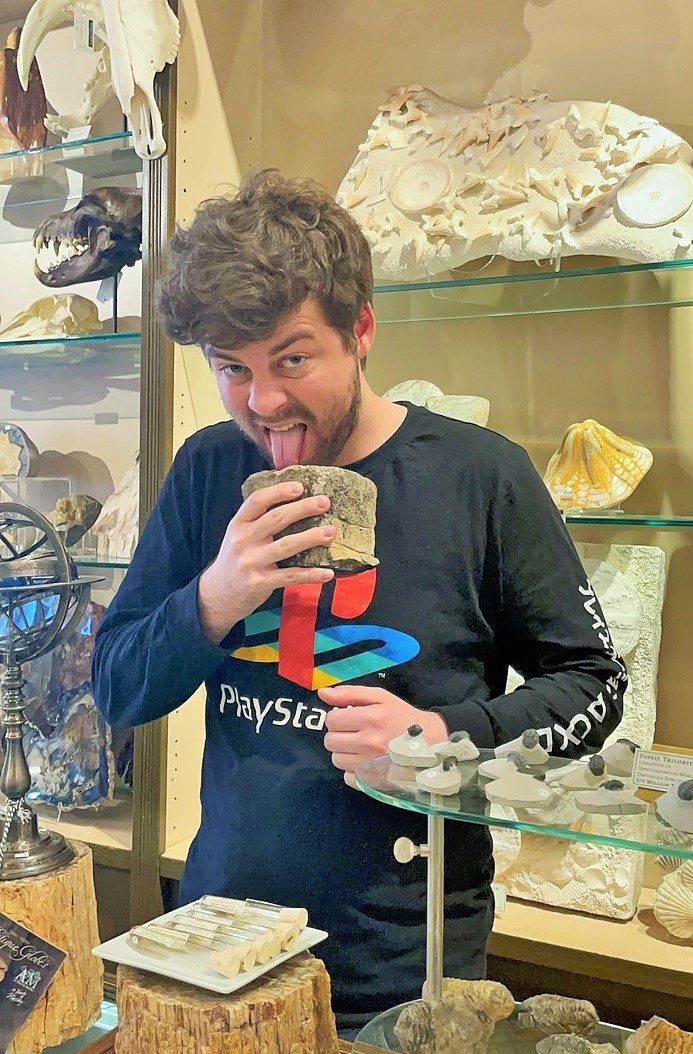 BY PLOY TANOMVORSIN | Broadway in the Greenwich Village/Noho area is the place to shop for the newest items: a new purse, a new pair of sneakers and even a “new” 100-million-year-old mosasaur tooth.

In the spirit of the current “Jurassic World: Dominion” movie, you can visit the Evolution Store, which sells natural history collectibles ranging from minerals and meteorites to preserved animals and dinosaur fossils.

Behind the storefront window at 687 Broadway, between W. Third and W. Fourth Streets, sits the store’s most expensive item, a gigantic $50,000 cave bear fossil. Inside the store, a glass cabinet labeled “Genuine Dinosaur Teeth” displays large and pristine “A-Quality” dinosaur teeth, laid out and labeled with prices ranging from $79 to $234. You’ll find here the teeth from the largest known carnivorous dinosaur species, the 22-ton spinosaurus, which can be seen fatally snapping the neck of a T-Rex in the “Jurassic Park III” movie.

There are also the teeth of the mosasaur, a species of marine reptile with lengths that reached up to 59 feet, which can also be seen hurling itself into the air and splashing the theme park’s spectator stand as it crashes back into its tank in the “Jurassic World” movie.

Outside of the cabinets, customers can pick out a smaller and more chipped mosasaur molar for only $8 each. But the cheaper chompers shouldn’t be looked down on.

Pruitt credits “Jurassic Park,” the first film in the series, which debuted in 1993, as one of the reasons he started studying paleontology. He has a bachelor of science in biology from Manhattan College but had gone on his first dig long before in high school when he helped unearth a triceratops with Caspar College in Wyoming.

Pruitt frequented the Evolution Store in the early 2000s, buying fossils of his own to add to his collection. However, he no longer has a private collection due to what he called moral issues, and only has one for teaching, since he feels he shouldn’t keep them just for himself.

“I feel like everyone should enjoy them,” he said.

The Evolution Store was opened in 1993 by Bill Stevens. Growing up in the Long Island suburbs he had an interest in collecting bugs and pets. He continued to collect over his lifetime of traveling and first opened the store at 120 Spring St. in Soho with five boxes of his personal collection of treasures. The store relocated to its current location at 687 Broadway in 1996 and is now run by his daughter Juliana Stevens. Since she was young, she has been helping her dad with the cash register and joining him on his travels throughout the U.S., Europe and Asia.

The shop attracts a variety of customers, particularly tourists. Mohammed Sefiani, 43, owner of the Tea in Sahara store in Providence, Rhode Island, was recently visiting the city with his wife when they stumbled upon the store. Sefiani had collected ammonites — marine mollusks that existed with the dinosaurs — when he was younger after studying them in mandatory ecology and geology classes during high school in Morocco. Sefiani bent over to read the description cards for some of the fossils and was surprised to see that most were exported from his home country.

Since the teeth are sourced from Morocco, they are cheaper, explained sales associate Pruitt. While he claimed that this was because the laws are more lenient there, an article written by Jihane Ben Yahia, a regional organized crime observatory coordinator at ENACT Africa, claimed that Morroco has an illegal fossil trade. Although Morroco is a signatory of a UNESCO convention that prohibits the export of cultural property, it has not acted in accordance to it, according to the watchdog group. Yahia stated that Morroco has an abundance of fossils, and the local workers are usually exploited to excavate them for wholesalers, who then sell them to exporters.

Nevertheless, Pruitt is confident that the fossils are genuine. In his two hands, he cradled a large piece of “chunkasaurus,” a humorous name the store gives to unidentifiable fragments of dinosaur bones, and pointed to the tiny holes in the previously living bone structure, created by the veins and the bone marrow. These structures can draw out moisture, which he demonstrated by licking the fossil, a technique commonly used by paleontolgoists. Although he felt the suction, it took a few licks on different places of the “chunkasaurus” before the effect was visible.

“Sometimes they stick more, ” he said. “The smaller fossils, they stay on your tongue.”

However, Pruitt used to not be as enthusiastic about working at the store since he believed that all fossils belonged in museums, before he realized that many fossils would be lost to erosion anyway. This reflects a larger controversy dating from September 2020 over the auction of “Stan” the T-Rex at Christie’s, where any private buyer could bid on the rare skeleton. The Society of Vertebrate Paleontology became concerned and wrote a letter to the auction house, stating that “specimens that are sold into private hands are potentially lost to science.”

Stephen Brusatte, the technical advisor for the new “Jurassic World: Dominion” movie and a professor of palaeontology and evolution at the University of Edinburgh, stated in an e-mail that this is his view, as well, but only concerning more significant fossils. He believes that as long as the most significant fossils are kept in museums for researchers and the public, it’s all right to sell the more common ones, since judging buyers based on their scientific knowledge would be a dangerous slope. The accessibility of fossils, the professor said, helps make paleontology, in turn, a more accessible science.

“Collecting fossils,” he said, “helped me become enthused about paleontology and evolution when I was a teenager.”