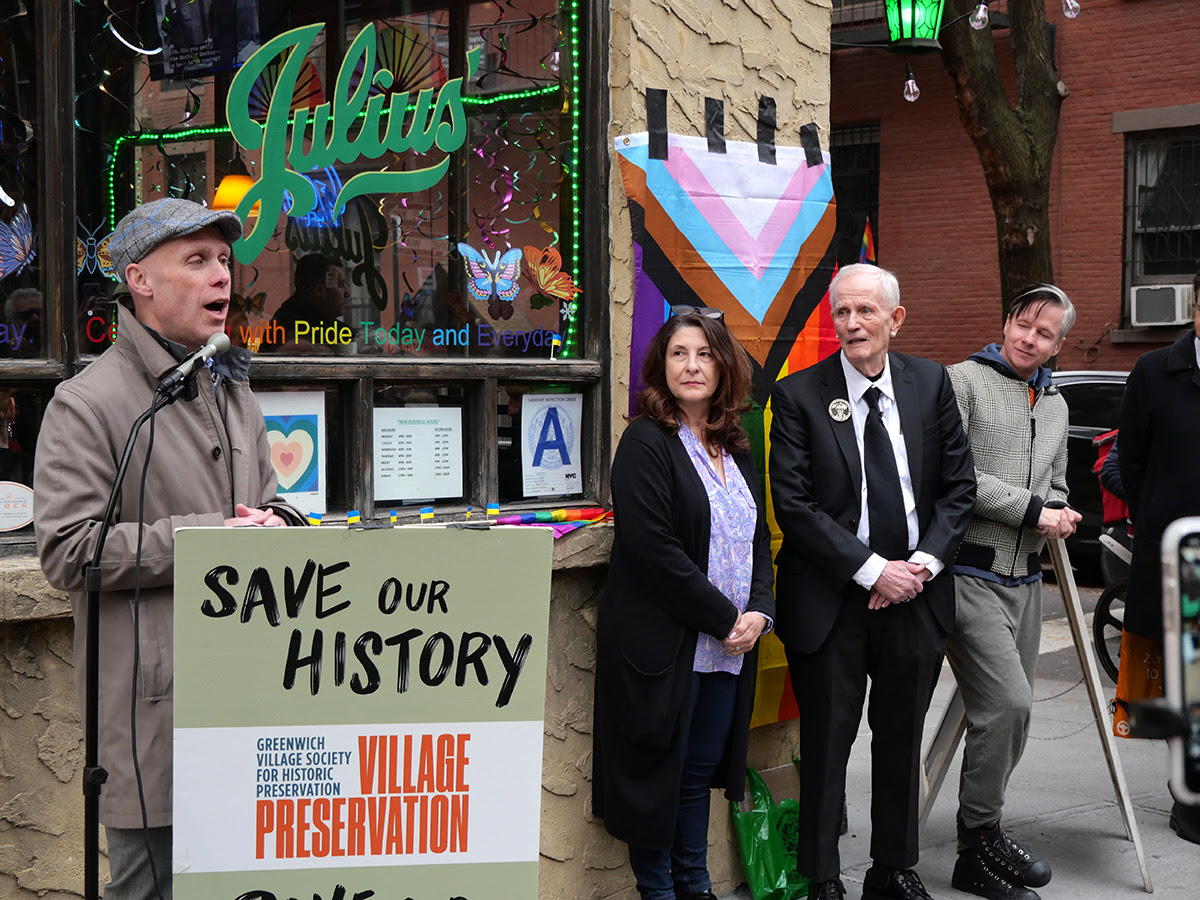 BY THE VILLAGE SUN | After a more than 10-year-long campaign led by Village Preservation, the New York City Landmarks Preservation Commission on Tuesday morning voted to designate 159 W. 10th St., a circa 1825 structure home to Julius’ bar, as an individual landmark.

The building actually already had enjoyed landmark protection as a part of the Greenwich Village Historic District, so was not at risk of potential demolition.

Julius’ is the city’s oldest gay bar and one of the city’s oldest continuously operating bars. In 1966, it was also famously the scene of the “Sip-In,” a protest against discriminatory laws and regulations that criminalized gay bars and other spaces which catered to or served L.G.B.T.Q.+ patrons.

Just days before the Sip-In, the watering hole had been raided for being a “disorderly establishment,” meaning it openly served homosexuals, which was then banned under New York State regulations. While the bar was a known gay hangout, patrons were expected to somehow by discrete about it.

The Sip-In group — making sure to wear suits and ties and thus look “orderly” — after the bartender had set up glasses for them, announced, “We are homosexuals and we would like a drink.”

The bartender, as seen in the iconic photo of the event, put his hand over the glasses and replied, “Then I cannot serve you.”

Three years before the Stonewall Riots — which occurred just around the corner — and based upon the “sit-ins” against segregation at Southern lunch counters, the Julius’ Sip-In was one of the very first planned actions of civil disobedience for L.G.B.T.Q.+ rights.

The Stonewall Inn was landmarked in 2015, becoming the city’s first designated L.G.B.T.Q.+ landmark, and the L.G.B.T. Center and Gay Activists’ Alliance Firehouse, on Wooster St. in Soho, were designated in 2019.

As part of Village Preservation’s ongoing campaign to get the city to also landmark Julius’, in 2016 the nonprofit organization partnered with the Estate of Fred W. McDarrah, the Village Voice photographer who took the iconic photo of the 1966 Sip-In, to raise funds and awareness for landmark designation.

Earlier this year, in April, Village Preservation unveiled a historic plaque for the building commemorating the Sip-In, which original Sip-In participants and organizers, as well as the journalist who originally reported on the story, attended.

Speaking to The Village Sun after the designation, Andrew Berman, Village Preservation’s executive director, said the building received its individual landmark status because of the “people history” connected to it.

“Clearly, this landmark designation is about the history that took place here,” he said, “rather than the building’s look or design. The people connected to this site is what was of paramount importance. But, certainly, you don’t want the building where it happened to disappear.”

Berman said this kind of landmarking is becoming more important and that Village Preservation has been advocating for it more, as well. As for why it took 10 years to happen, he wasn’t sure, but the fact that the building wasn’t endangered could have been a factor.

Indeed, fighting to protect L.G.B.T.Q.+ and civil-rights sites in the Downtown community is part of Village Preservation’s mission. Last year the group’s advocascy secured landmark designation of 70 Fifth Ave., the former headquarters of the NAACP and The Crisis magazine and home to an array of women’s, peace, labor, civil rights, humanitarian and social justice organizations.

The organization has set its landmarking sights on still more civil-rights-related sites in the area, including, among others, the former headquarters of the first national gay rights organization, at 80 Fifth Ave., the former headquarters of the NYC Woman Suffrage League, at 10 W. 14th St., and the home of Jacob Day, one of 19th-century New York’s leading crusaders for voting rights and freedom for African Americans, at 50 W. 13th St.

The first two sites are in the nonprofit’s proposed South of Union Square Historic District.