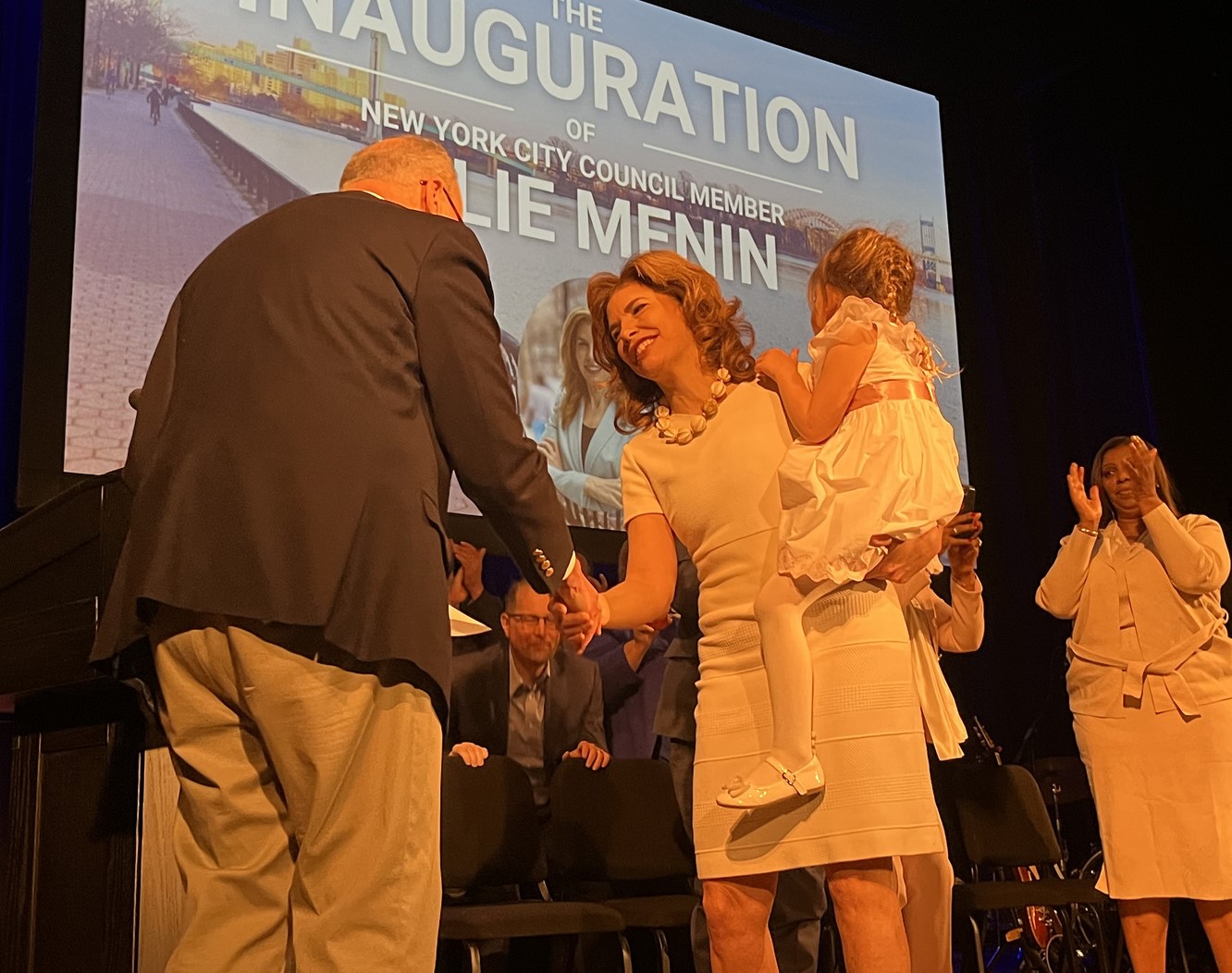 Julie Menin feted at inauguration as Upper East Side councilmember

BY LINCOLN ANDERSON | A former leader of Lower Manhattan, Julie Menin was recently ceremonially sworn into office in the City Council — on the Upper East Side.

Senate Majority Leader Chuck Schumer administered the oath of office to Menin as she cradled the youngest of her four children, her daughter, Madison. Also joining her onstage were her husband, Bruce, and their high school-age sons, Max and twins Mason and Lucas.

The opening “welcoming message” was given by three public-housing leaders in the district, Christina Johnson, Sandra Perez and Saundrea Coleman.

In his remarks, Mayor Adams praised Menin as a “commonsense” voice that is sorely needed in the City Council. Three religious leaders, including Cardinal Timothy Dolan, also gave remarks.

An attorney and civic leader with more than two decades of experience in the public and private sectors, Menin most recently served as the city’s Census director, leading New York to a first-place turnout among all major cities.

Among the early highlights of her career was helping lead Lower Manhattan back from the devastation of the 9/11 attack.

Adams said the city is currently in a moment of extreme “dysfunction,” equating it to when a frog is in a pot of water but won’t hop out if the temperature rises gradually — and ultimately boils to death.

“Someone is living in a tree in our park,” he said, incredulously. “We have encampments in our subway system. People walk into stores and take what they want. We normalize open drug use in a park. People are watching people inject themselves.

“Everything she has touched has turned into success. I’m so happy you are in the Council, and you are going to be an amazing partner for the [Council] speaker. You’re going to be a stabilizing voice,” he said of Menin. “We need her voice, especially as the chairperson of the [Council’s] Small Business Committee. I’m proud to be her friend, her ally and proud to serve in government with her.”

Council Speaker Adrienne Adams said Menin “has been our everything person” in New York City for years and is now “taking her rightful place in leadership” in the first-ever women-majority City Council.

“We bring that nurturing piece. We bring that holistic piece,” Adams said of female leaders. “Yeah, we need that male energy. But there is nothing like that feminine energy.”

“You see, that’s Julie Menin,” she said, “high-minded, intellectual, making sure that our democracy reflects all of us and that all of our voices are heard.”

Gazing at the distinguished names emblazoned in goldleaf at the top of the auditorium’s walls, James said, “Lincoln and Einstein and Bach…and Julie Menin.”

In his remarks, Schumer noted of Menin, “She had a passion to see that Downtown came back [after 9/11], and as chairperson of the Lower Manhattan planning board, she did it.

“This is a district that has a lot of wealthy people,” he noted of the Upper East Side. “But it also has a lot of people in little apartments trying to find that ladder up, of all races. You couldn’t find somebody better prepared to help this whole district, every part of it, than Julie.”

“She prevented us from losing two seats [in Congress],” he said. “Had she been the statewide Census director, we would have kept the delegation intact.”

Added Maloney, “New York State lost only one seat — when it was predicted we would lose two — helping maintain a Democratic majority in the House of Representatives.”

Schumer quipped that if Menin had been working on the Census at the state level, New York would have “picked up Bergen County.”

Congressmember Jerrold Nadler recalled the “Ground Zero Mosque” battle, where Menin championed the right of Muslims to open a house of worship near the scene of the 9/11 attack’s devastation.

“I watched as she led against demagoguery, against religious bigotry,” Nadler said, “because there was a Muslim community Downtown that wanted to build a mosque a few blocks from the World Trade Center and there were those not only Downtown but across the country who said this was an insult to those who died in the World Trade Center… . Julie led the very very difficult fight against that.”

While the original, more-extensive mosque plan never came to fruition, a scaled-down facility was opened at the location.

“It has become a vehicle to represent our low-wage workers, who are otherwise not included, making out city more equal,” Lander said of D.C.W.P.

Mark Levine, the Manhattan borough president, praised Menin for “improving the status of women in media and entertainment in New York City” when she led the Mayor’s Office of Media and Entertainment.

He added that the Census effort could have well been thrown off track by the COVID pandemic, but that Menin didn’t let that happen.

“It could have and probably should have been a catastrophe for the Census,” he said. “It is kind of a miracle that not only was it not a catastrophe but we beat every other big city in America when we were the epicenter.”

Recalling watching her teach a rigorous college law class, Levine added that Menin never does things in a halfhearted way but always gives her efforts 100 percent.

In her own remarks after being sworn into office, Menin mentioned how her grandmother and then-infant mother barely survived the Holocaust in Hungary by hiding in a cellar, then managed a harrowing escape after the Russian occupation. Menin’s grandfather and more than 50 relatives died in the Holocaust.

Her grandmother and mother settled in Yorkville on the Upper East Side, where, as an adult, her mom came to the 92nd St. Y every day to speak Hungarian and to swim, Menin said.

“It is now such an honor to come back to my family’s roots and represent this special community,” she said. “I moved back to this district in 2014 when my mom was diagnosed with a rare, incurable cancer. Walking these same streets with her, here in the Little Hungary neighborhood she had fled to as a teenager to escape oppression, deepened my appreciation for this community.

“And I know my grandmother and my mom are smiling at us right now, sitting here in the place they called home,” she said. “When I think about my career and how I got involved in public service in the first place, I realize my desire to serve is all about my love of community. I cannot wait to continue to work with all of you to move our community forward.”

Menin noted that after 9/11, she helped save more than 600 small businesses in Lower Manhattan. Now, as chairperson of the Council’s Small Business Committee, she said, her career is “coming full circle.”

She also vowed to focus on creating “safe intersections” on the Upper East Side.

“This is the district with the highest number of injuries and fatalities,” she said, “and we have to change that.”

To watch the video of the inauguration, click here.