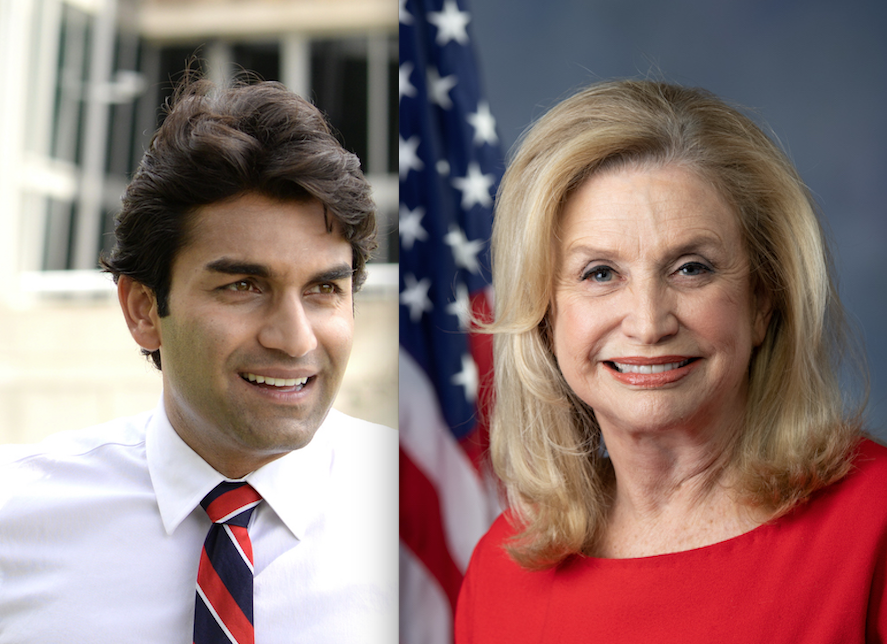 Suraj Patel and Carolyn Maloney are still locked in a close race for the 12th Congressional District, six weeks after the June 23 primary election.

BY LINCOLN ANDERSON | Hey, Trump — you better grab a stiff cup of covfefe and read this.

The president has been railing against voting by mail, and has focused lately on New York City’s 12th Congressional District Democratic primary, in particular, as an example of all that can go wrong with it.

Trump is now calling for a “do-over” of that race, which he says is a total “mess.”

There won’t necessarily be a do-over, but thanks to a federal judge’s ruling on Monday evening, hundreds or more of absentee ballots that had been invalidated in that race may now be counted. The New York Times reported that the number of ballots in question is at least 1,000.

More than that, the judge’s ruling applies to every single election that was held across all of New York State on June 23.

But, without doubt, the 12th District race, in particular, has become the poster child for an election getting bogged down by a dysfunctional mail-in voting process.

Normally, the Board of Elections is supposed to certify elections within 13 days. But this time around the board was overwhelmed by the number of absentee ballots that were cast due to health concerns over the coronavirus pandemic.

As a result, more than six weeks after the June 23 primary election, a winner still has not been determined in the 12th District race between incumbent Carolyn Maloney and challenger Suraj Patel.

The sweeping district stretches from the Upper East Side to the Lower East Side and takes in Astoria, Long Island City and Greenpoint.

Maloney was up by 3,700 votes after more than 12,000 mail-in ballots had been invalidated due to lack of a “timely postmark.”

Ballots were invalidated for being delivered after the June 23 deadline, for being postmarked with a date later than June 23 or for not even having a postmark.

But Patel, along with Emily Gallagher, a state Assembly candidate in Queens, filed a legal challenge, charging that the Board of Elections failed to count all qualified absentee ballots. Their suit was joined by Maria Kaufer and Ethan Felder, two Queens district leader candidates.

The plaintiffs — who also included more than a dozen voters who said their ballots had been wrongly invalidated — charged that their rights under the First and 14th Amendments had been violated.

In terms of the four candidates’ investigation of the invalidated ballots, Brooklyn was found to be the worst borough in terms of absentee ballots missing postmarks.

On Monday evening, U.S. District Judge Analisa Torres ruled for the plaintiffs. She issued a preliminary injunction, ordering the commissioners of the New York State Board of Elections, first, to count all “otherwise valid” ballots that were received by June 24, without regard to whether they were postmarked June 23, and, second, to count all ballots received by June 25, so long as they were postmarked no later than June 23.

Under Election Law, all mail-in ballots postmarked up to the day of the election and received within seven days after the election must be counted.

The decision hinged on the fact that New York voters this year, if they requested an absentee ballot, were sent a postage-paid one — meaning it did not technically need to be postmarked, as in prior years. Yet, the U.S. Postal Service committed to cancel — as in, postmark — every one of these ballots, nevertheless. This, in fact, has been the Postal Service’s standing policy for elections for the last 20 years.

The judge’s decision, citing testimony from the court case, describes the resulting situation — basically chaotic, from the sound of it — at the U.S.P.S. Morgan Facility, at 30th St. and Ninth Ave., in Chelsea, the central location where all New York City mail is processed:

“Postal service representatives testified that they took seriously their commitment to postmark absentee ballots for the June 23 Primary. [Allen] Tanko [U.S.P.S. marketing manager] indicated that on June 22, the USPS received over 30,000 absentee ballots which needed to be delivered to voters by the next day.

“Tanko directed the Morgan Facility to upgrade the ballots to Express Mail, in order to ensure that voters would receive them in time to vote on June 23, Election Day.

“As an additional safeguard, during the week before Election Day, the Morgan Facility assigned ‘gatekeepers…to filter through [any ballot return envelopes] that didn’t go through the cancellation machines and actually pull [them] out one at a time and hand cancel them.’

“The New York District requested that its various locations also count and postmark any return envelopes missing postmarks. On the night of June 23, staff at the Morgan Facility ‘forced everything through the cancellation machines’ and were ‘hand-cancelling [thousands of ballots] that [were] bypassed on the cancellation machines to ensure that they had the correct same-day postmark.’

“Yet, despite the postal service’s best efforts, there is uncontroverted evidence that thousands of absentee ballots for the June 23 Primary were not postmarked. This could be due to a number of human or mechanical errors. For example, some return envelopes may lack postmarks because, contrary to policy, the envelopes were not routed to the Morgan Facility, or were misdirected and did not pass through the automatic cancellation machinery.

“It is also possible that the automated process failed to cancel some ballot envelopes because they were folded over, stuck together, or otherwise avoided the stamping process for mechanical reasons.”

Attorney Schwartz said he thinks the tallying of the previously invalidated ballots will only add an additional day or two to the already overly drawn-out certification process for the four candidates’ primary contests.

The ruling affects every single primary election — and special election — that occurred in New York State on June 23. But Schwartz said he doesn’t foresee any revisiting of invalidated ballots in Joe Biden’s victory over Bernie Sanders in the presidential primary.

“I don’t think anybody’s going to fight it,” he said, adding the difference might only amount to one convention delegate.

“I know the Board of Elections is annoyed,” he noted of the judge’s decision on the lawsuit.

However, New York’s election process, in general, is a disaster and this ruling is part of righting the ship, as Schwartz sees it.

“I think this is an important step in the direction of making elections fair in New York,” he said. “New York ranks down at the bottom of voter participation. I think last year New York ranked 46th in voter participation. New York, just recently, was the 34th state to enact early voting. There’s very low voter enrollment. New York is a horrible place to exercise voters’ rights.”

The attorney noted that New Yorkers can’t even register to vote online, but must fill out a physical card.

“We want to make New York work as well as possible,” Schwartz said, “so Trump can’t point to New York and say, ‘Look at New York — if New York is so bad, then everybody must be worse.’

“The reality is New York is worse.”