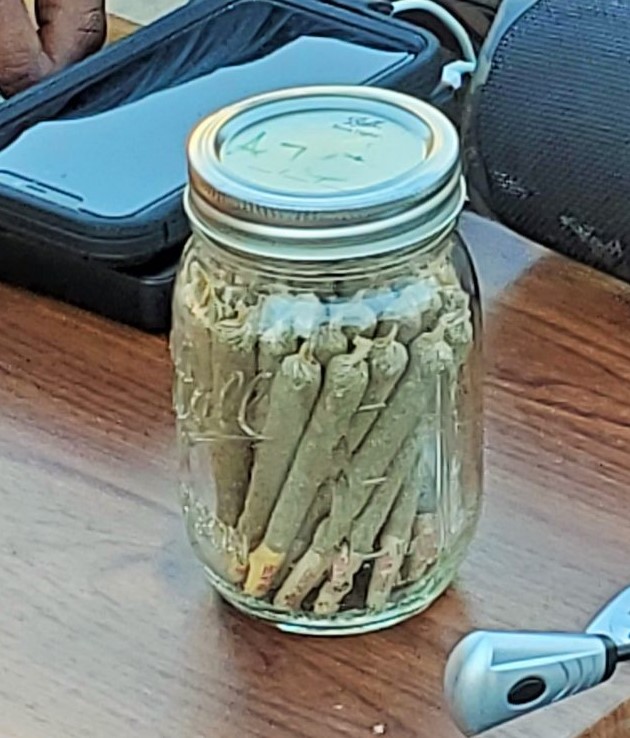 Pre-rolled joints for sale in Washington Square Park. (Photo by The Village Sun)

BY LINCOLN ANDERSON | It’s time to get blunt about legal pot, according to Mar Fitzgerald.

People are selling weed from vans, from tables on sidewalks, from tables in Washington Square Park, in bodegas and corner delis, even in so-called “cannabis clubs” that claim to be legal pot dispensaries. Meanwhile, though, as this booming “gray market” flourishes, actual, state-licensed dispensaries will be coming soon, and the government could start cracking down on all of the former.

It all could be pretty confusing — even if you haven’t been puffing.

To bring a dose of clarity, Community Board 2 is organizing a joint forum of Downtown community boards on the subject. Fitzgerald, a member of the Greenwich Village-area board, is spearheading the effort.

So far, also on board for the forum are Community Boards 1 and 4, covering Lower Manhattan and Chelsea/Hell’s Kitchen, respectively. Fitzgerald said she has also reached out to C.B. 3, covering the East Village and Lower East Side, and is awaiting confirmation.

The Thurs., April 28, forum has the working title “Downtown Cannabis: A Community Discussion About the Emerging Recreational Cannabis Business Landscape.” The event will be hosted by the C.B. 2 Equity, Race and Justice Committee, which Fitzgerald chairs, starting at 6:30 p.m. An in-person venue has yet to be determined.

There will be several guest panelists, including attorney Cristina Buccola, who is a well-known cannabis advocate, plus two or three representatives from city and state agencies.

A native of Westbeth Artists Housing in Greenwich Village, where she still lives, Fitzgerald is also co-president of the Village Independent Democrats political club.

Speaking to The Village Sun, she said, “People have so many questions,” for example, whether pot dispensaries legally can be sited near schools.

“They don’t know that cannabis businesses are subject to the 200-foot rule or a 500-foot rule,” she noted.

Meanwhile, the state’s new Office of Cannabis Management is getting ready to start moving on legal dispensaries before the end of the year.

“The O.C.M. is telling us these licenses will be rolling out as soon as December,” Fitzgerald said. “The next step in the approval process is the community boards.”

That, in turn, leads to the next question, concerning the impact of C.B. 2, or as Fitzgerald put it, “How can we be a part of this?”

“We need to talk about community impact and community opportunity,” she explained.

What is known is that the first 100 dispensary licenses will be distributed to applicants on the basis of social and economic equity, including to individuals who were convicted on pot-related charges. After that, 50 percent of licenses issued will continue to fall under those categories, as well.

“There’s going to be a ranking system to determine who qualifies as a social-and-economic-equity application,” she noted.

There will also be a fund of $200 million to help the fledgling dispensary owners get their businesses up and running.

As for the role of C.B. 2 in the whole process, applicants will be reviewed by Fitzgerald’s Equity, Race and Justice Committee — at least at the start. If the number of applicants for dispensary licenses snowballs, the board would create a new committee to deal with it, similar to how its two S.L.A. Committees currently review bar and restaurant liquor-license applications.

There doesn’t appear to be any legal cap that would limit the number of pot dispensaries that could open up.

The current gray area — post-legalization but pre-dispensaries — is an anything-goes atmosphere that has been dubbed the “gray market.” Although it seems Albany is generally not doing much about the current state of affairs, Fitzgerald said some enforcement actually is happening — which is, in turn, triggering pushback from pot peddlers.

“Last I read,” she said, “several cease-and-desists had been issued by the O.C.M., and at least one ‘dispensary’ has sued the O.C.M.”

In short, it’s high time for this kind of community board forum, in Fitzgerald’s view.

“We’ve been talking about this for a while,” she said. “It’s time. People need to get ready to be on board.

“It means business opportunities,” she said, adding, “We still have tons of empty storefronts.”

Similarly, Mariama James, a member of Community Board 1, said the board is eager to be a part of this “important conversation.”

“C.B. 1 is so excited to partner with our fellow Downtown boards for this important conversation and would greatly benefit from an increase in Black- and Latino-owned businesses in our area,” she said. “As the co-chairperson of the board’s Quality of Life Committee, a member of Licensing and Permits Committee and the chairperson of the Large Venue Working Group at C.B. 1, I deeply appreciate the opportunity we’re being extended to have a voice.”