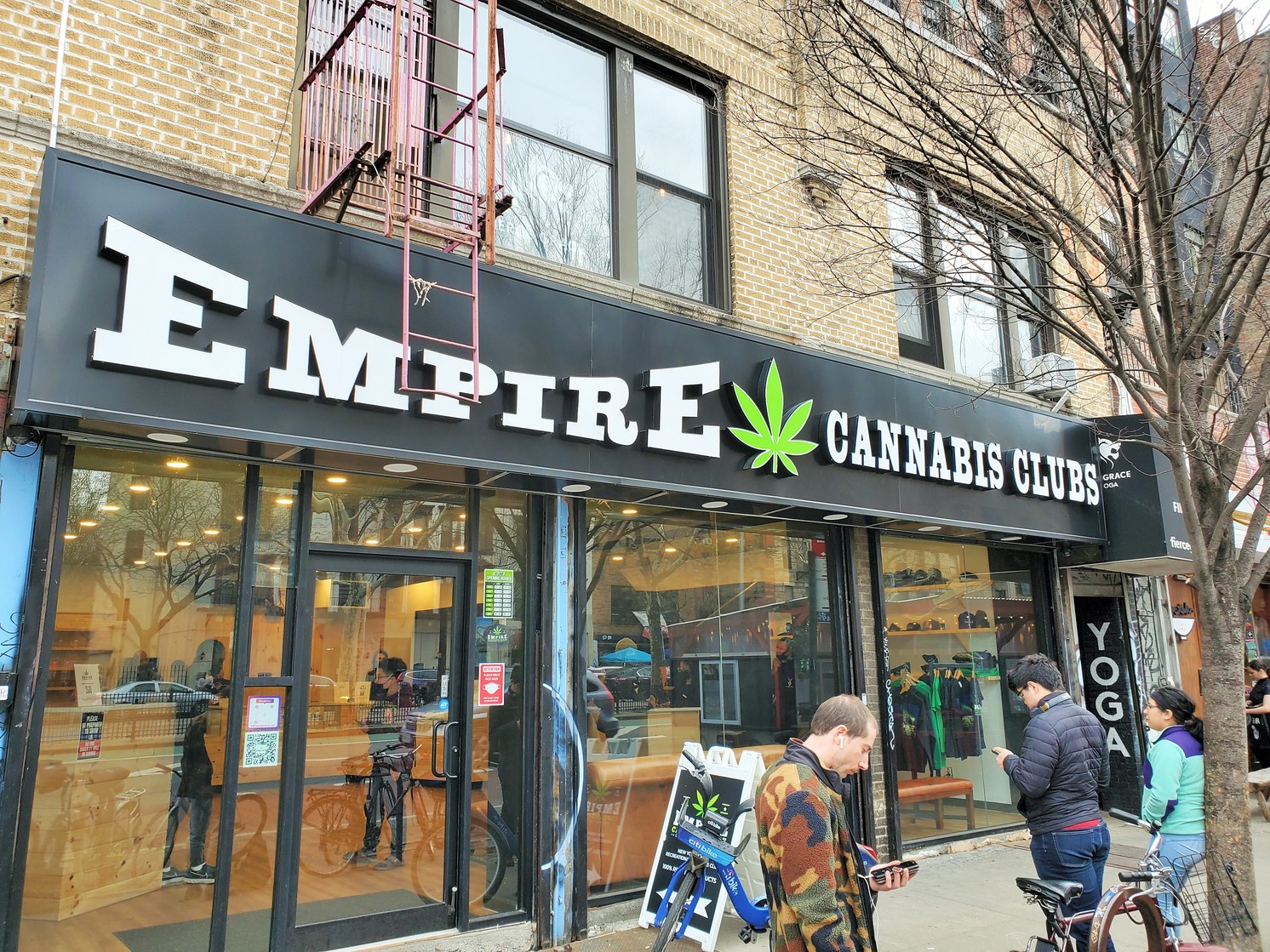 An Empire Cannabis Clubs outlet recently opened on the Lower East Side. (Photo by The Village Sun)

BY LINCOLN ANDERSON | Cool! Check out the new pot dispensary! That might be your first thought upon seeing the Empire Cannabis Clubs storefront on the Lower East Side. Though you might also think…How is that possible?

Indeed, it’s not currently legal to sell marijuana like this from a store — nor, for that matter, from vans or from tables in Washington Square Park, either. More to the point, a crackdown surely will be coming soon, an attorney familiar with the issue told The Village Sun.

Empire Cannabis Clubs recently opened a second location in New York City, on Allen Street between Stanton and Rivington Streets. Its first was in Chelsea and there are plans to expand into Brooklyn.

Although recreational marijuana has been legalized in New York, it’s still illegal to sell weed. The plan is for licensed dispensaries to sell pot, which will be taxed, providing revenue for the state. But the dispensaries are not up and running yet, creating a so-called gray area and, in turn, what radical attorney Stanley Cohen calls “the gray market.”

Empire Cannabis Clubs claims to get around the legality issue by instead selling club “memberships” that entitle members to obtain pot at its outlets.

The Allen Street storefront was formerly home to Bluestockings, the feminist, radical bookstore, which closed in July 2020 and reopened nearby on Suffolk Street.

Inside the Lower East Side location, the counters are manned by friendly “budtenders.” Club members and prospective members are buzzed in and out through a locked front door.

Empire Cannabis Clubs bills itself as a “concierge collective” and, going even further, as New York’s “first dispensary.” Workers at the Lower East Side store and the company’s Web site maintain the business model is perfectly legal. A budtender at Allen Street referred further questions about this claim to the e-mail address listed on the shop’s business card, an e-mailed query to which, though, went unanswered. An e-mailed question to New York State’s Office of Cannabis Mangement asking about the cannabis club’s legality also went unanswered.

Meanwhile, Mathew Lee, an Upstate college student from Staten Island, gave the Allen Street Empire Cannabis Clubs a try a couple of weekends ago and had no complaints. He emerged from the place with “flower” (buds) and pre-rolled joints. An Instagram ad for the store had piqued his interest.

However, a female companion with Lee was adamant about not giving her name, noting, “I’m going into law school!”

Speaking of the law, attorney Cohen, who represented East Village squatters back in the 1980s and ’90s, scoffed that the cannabis club approach is “too cute by half.” He currently happens to be representing clients who are looking to get dispensary licenses.

“These clubs have an enormous problem, even though the current criminal exposure is negligible,” he said.

For starters, he noted, the way New York’s law legalizing pot — the 2021 Marihuana Regulation and Taxation Act, or MRTA — has been set up, 50 percent of licenses will be allocated to communities that have been excessively impacted by previous marijuana enforcement, including low-income communities of color and, specifically, individuals who have been convicted of pot-related offenses.

Beyond that, he assured, civil enforcement — culminating in seizure of assets — will start soon against the gray market, though adding it’s not something he personally endorses.

“It might not be for six months or a year, but it’s going to happen,” Cohen predicted. “They’re serious about this s—.

“That kind of cuteness does not work to escape civil forfeiture,” he said of the cannabis clubs. “If New York is going to have credible licenses for retail and [pot] growth, they’re going to have to deal with the competition.”

The attorney noted California tried to address this gray-market dynamic by subsidizing its legal dispensaries, yet didn’t dent the flood of illegal weed selling, making the Golden State now consider a different tack.

“The big mayhem is going to be civil [forfeiture],” he said. “If someone owns a cannabis club and they own three cars and have a f—in’ home on Long Island or property up in Woodstock, New York’s going to go after that s—.”

Cohen said one small-time pot outdoor vendor recently called him for legal advice, saying, “All I have is a table.” But the attorney said that’s no protection, either, and that regulators will find ways to hit even the smallest of sellers.

“They’re gonna move to take old cars,” he said. “They would make it hard to rent [an apartment].”

The idea that already-existing pot stores or clubs could somehow “slip in” and be legalized as dispensaries won’t happen either, he explained.

“In New York State, under the [legalization] act, anyone operating without a license is automatically ineligible for a license once they open their doors,” he noted.

Cohen stressed that the state has taken very clear steps — such as moving marijuana from under the state Department of Health’s jurisdiction into the newly created Office of Cannabis Management — that show its seriousness on the issue.

In short, he said, New York State did not work this hard to set up a system for legalized weed sales only now to allow it to be cut into by gray-market entrepreneurs.

One criticism of other states’ social-justice efforts to set up dispensaries in impacted communities has been that the license recipients sometimes can be undercapitalized. As a result, lacking, say, the needed $100,000 to open a dispensary, they might instead just “flip” their licenses by selling them to more well-funded groups. But Cohen said that won’t be the case in New York because “seed money” will be included with the licenses handed out to these recipients.

“So,” he said, “there’s not going to be the need to be a f—in’ ghost operation for f—in’ white boys from Nassau [County].”

“When you look at the percentage of people from the Lower East Side that have gone to prison for pot offenses versus the Upper East Side, Upper West Side or even Greenwich Village, it’s staggering,” he said.

And it won’t just be the state keeping an eye on illegal sales, the attorney added.

“If I’m some local kid from Loisaida and I see some f—in’ white boys opening a f—in’ place on Eighth Street beetween C and D, you don’t think I won’t lose my s—?

“I get it, it’s sort of like the Al Capone speakeasy of cannabis,” Cohen shrugged of so-called pot clubs. “But there’s no real money to be made because it’s legal to sit out on the street and have an ounce of pot. I can go to one of 200 people that I know and buy the best pot and sit down on a bench and smoke a joint and laugh at the cop.”

At any rate, in the meantime, at least, club members can enjoy their perks and puffs while they last.

But of cannabis clubs and the ganja gray market, in general, the attorney predicted, “It’s gonna be short-lived.”