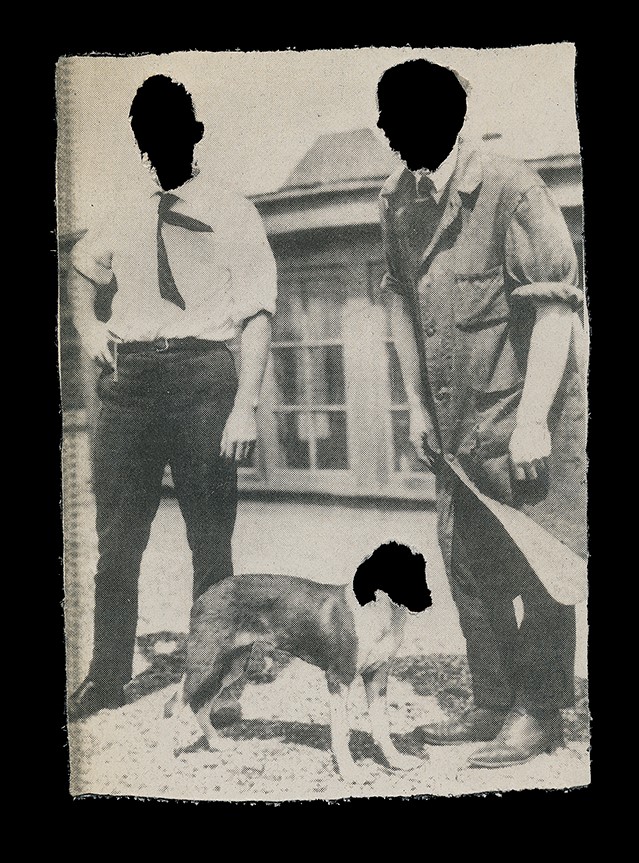 A piece from Jim Jarmusch's new book, "Some Collages." (Courtesy the artist)

Jim Jarmusch’s ‘Some Collages’: More scenes from a strange dream

BY STEPHEN DiLAURO | Randy Kennedy, in his introductory essay to Jim Jarmusch’s “Some Collages,” seems to cover all the points that came to mind when I got the assignment to review this book. I’ll give it my best shot anyway.

Some films of Jarmusch’s that I’ve seen gave me a feeling of being awake in someone else’s dream. One can pay attention purely out of curiosity. These collages do nothing to diminish that sensation. They are intriguing. They are mysterious. They are weird.

Apparently, few people ever saw the auteur’s collage experiments prior to this book being published. “Some Collages” is a selection of pieces from hundreds the director has made over the years, according to the press release.

The book is small — 8.6 inches by 6 inches — by art book standards. Kennedy suggests carrying it in one’s pocket and consulting it like a tarot deck, which seems a bit of a stretch. There are no titles or dimensions included with the images. But given the size of the book, I imagine the originals must be quite small.

Kennedy, a former New York Times reporter, writes about newsprint as an artistic element of collage in his introductory essay, “Rolling Papers: Thoughts on Newsprint and Art.” (The poet Luc Sante contributed a foreword to the book.) After reading Kennedy’s piece, one can’t help but wonder where collage artists will turn once newsprint disappears from the marketplace, as it seems to be doing.

Kennedy also talks about the cut-up experiments of both Tristan Tzara with poetry and Bill Burroughs and Brion Gysin with prose, both of which came to my mind at the outset of this review, as collage corollaries. Kennedy goes on to mention other visual collagists — Henri Cartier Bresson and Louis Armstrong among them — who indulged their artistic proclivities cutting and pasting newsprint images to create something different and outside the scope of their usual discipline. Louis Armstrong as a collagist was a revelation to me.

Kennedy also posits that the motivation behind Jarmusch’s and others’ collages is spending time in hotel rooms. The idea of artistic entropy comes to mind in this context; entropy being the diffusion of energy that occurs with the passing of time. Of course, one first must accept that time is not a collective delusion, an imprecise attempt to measure consciousness. But that’s another topic for another time.

None of this is to say that Jarmusch created these works in a cultural vacuum. Far from it. Andy Warhol, Christopher Walken, Stanley Kubrick and other celebrities and newsworthy figures have their visages transplanted within Jarmusch’s pieces. Donald Trump is a repeat image, an unmistakable figure transmogrified. As far as visual art historical references, the surrealist Max Ernst came to mind a couple of times.

However, there are other faces and figures in collages where I just don’t get the reference, if there is one. This being a Jarmuschian endeavor, it is quite conceivable that references don’t exist beyond the dream, whomsoever might be the dreamer. Jarmusch is not about explaining himself.

For the Jarmusch completist, “Some Collages” will be a required acquisition. There’s nothing disturbing here, nor is there anything groundbreaking. One could say it is interesting and charming, a sideways glance into the mind of someone whose genius lies elsewhere.

DiLauro is a playwright and musician living in Greenwich Village.