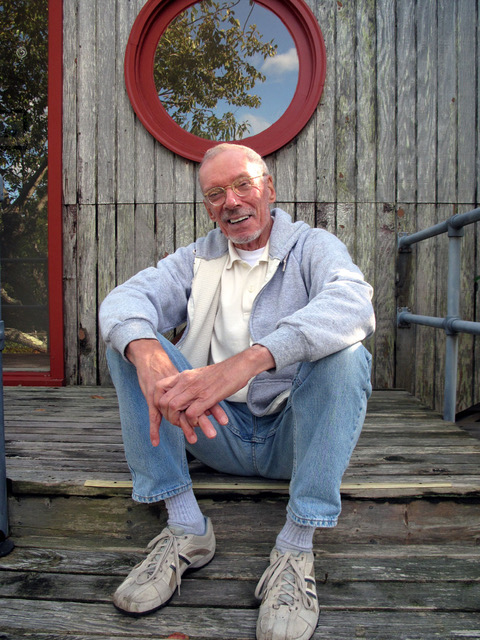 Jack Dowling in Cherry Grove, Fire Ireland, where he was commissioner of the volunteer fire department. (Courtesy Peter Dowling)

BY LINCOLN ANDERSON | Jack Dowling, an artist, writer and 50-year resident of Westbeth Artists Housing, died on Feb. 4 at Lenox Hill Hospital. He was 89.

According to his brother Peter Dowling, the cause of death was COVID, with contributing factors of chronic obstructive pulmonary disease and a slight heart condition.

Jack Dowling was the visual arts chairperson of the Westbeth Artists Residents Council for a record 14 years. The position also carries the title of director of the Westbeth Gallery, a role that Jack poured his heart into, according to those who knew him.

Westbeth’s Icon Project, which was founded and funded by WARC, honored Jack as its first Westbeth Icon in 2017. The project celebrates the life and work of Westbeth senior artists who continue to create passionately in their field.

Jack Dowling – painter, printmaker , and writer was named the first Westbeth Icon. See video of the celebratory evening on Nov 19, 2017.

(A video interview, above, of Jack Dowling from 2017 when he was named the first Westbeth Icon. Click on the headline to watch the video or just click here.)

The former Bell Labs complex, Westbeth, at Bethune and West Sts., was converted for adaptive reuse for affordable artists housing. It opened, with 384 apartments, in 1970.

Although Jack Dowling was not technically an original tenant of Westbeth, he moved in not long after the building opened, according to George Cominskie, former longtime WARC president.

“Jack was fiercely loyal to the concept of Westbeth and to its artists, regardless of discipline,” Cominskie said. “He supported their causes, funded their needs and guided their artistic vocations. We have lost a great friend with Jack’s passing. ”

John P. Dowling was born on Oct. 1, 1931, in Perth Amboy, New Jersey, to John J. Dowling Jr. and Jane (Kingberry) Dowling. His father was a project engineer with Standard Oil of New Jersey (ESSO) and his mother was a housewife.

He moved to the West Village in 1951. Two years later, he entered The Cooper Union School of Art & Design, where he studied for four years.

Dowling next lived in Europe for several years, during which time he was an artist in residence and a teacher at the Positano Art Workshop in Italy. His early painting was abstract, but his style later took a new direction, with compositions inspired by photos of family and friends that he had taken over the years.

By the mid-1960s, he had achieved success, selling and exhibiting his work in both group and solo shows. In 1970, he moved into Westbeth.

Jack was also a published writer of short fiction.

He was a longtime summer resident of Fire Island’s Cherry Grove, where he was the commissioner of the volunteer fire department for many years.

Jack Dowling was a sought-after source for historical information and flavor of about early Greenwich Village life and early gay life in New York City and Fire Island.

Nancy Gabor, a director and acting teacher living at Westbeth, said that a year ago, at age 88, Jack started taking her improv class, “You’re Never Too Old Too Play,” and loved it. The class is geared to people between ages 75 and 95.

“He was great. He had never done it before,” she said, referring to theater improv and storytelling.

Creating a dedicated performance space at Westbeth has been a goal of Gabor’s. She said Jack gave funding for the effort.

“Jack was very generous,” she said. “He was interested. He was always interested in you — and in an artists building that’s unusual.

“He was the head of the gallery for 12 years, so he knew all the visual artists, supported them, encouraged them. He was really a mentor.

“I think a word that you can use for him was that he was beloved.”

Kate Walter said Jack Dowling was very supportive of her writing. They did a reading, along with two other Westbeth writers, in the community room on March 4.

“It was probably the last event there before the lockdown,” Walter said. “It was a great evening. Everyone was reading fiction. The event was billed as ‘A Literary Evening of Works in Progress: Westbeth Authors  Read from Their Latest Novels.'”

Painter Sheila Schwid worked with Jack in the Westbeth Gallery for many years and recalled his tremendous dedication to it.

“One thing I would like to stress is the long hours and hard work that Jack did and how he kept that part to himself,” she said. “People who did not know, or care, would say things like, ‘Oh, he must get paid.’

“On the contrary, he spent his own money on things necessary for the gallery, like books for attendees to sign, cleaning supplies, bathroom necessities, garbage bags, pens, pencils, paper, notebooks, whatever the gallery needed, not to mention phone calls and ink and paper for his computer.  The most important part was the long hours. It took up the major part of his life.

“Jack changed the whole feeling of the gallery, from a feeling of ‘It’s good enough’ to ‘It has to be the best,'” Schwid noted. “Artists who had not been painting for years went back to their studios and made the best work of their lives.

“And, oh, how he worked on the arranging and hanging of the shows. He would be faced with as many as 120 pieces by as many artists. He would arrange the pieces over and over again; the pieces would be leaning on the walls. Then he would try again. His goal was to make each piece look great. He would even wake up in the middle of the night, go down to the gallery and work on it again.

“Jack had such a wonderful eye,” she said. “He could make any combination of disparate styles, talents and techniques into a solid, uplifting show. I could always tell if a show had been hung by Jack or someone else. No one else could compare.

“While working with Jack I learned that he really loved so many of the artists and was so glad to see their work improve.”

Schwid said Jack quit running the gallery to focus on his writing.

In February of last year, Schwid became a Westbeth Icon. Jack spoke about her at the ceremony, noting how her painting had improved.

“I did not understand how special they were,” she said of the awards. “I was moved to tears. At that time I had no idea of the great amount of money he donated to the Icon Project. He kept that strictly secret. Since then I have learned that there probably would not have been such a project without him.

“We loved Jack. We love our memory of him.”

Jack Dowling was predeceased by his partner Wallace “Wally” Forstall and by his brother David Dowling (Annette). He is survived by his brother Peter Dowling (Polly Pettit); sister Susan Nelson (Donald); and by three nephews and two nieces.

In lieu of flowers, donations in Jack Dowling’s name can be made to the Westbeth Artists Residents Council.