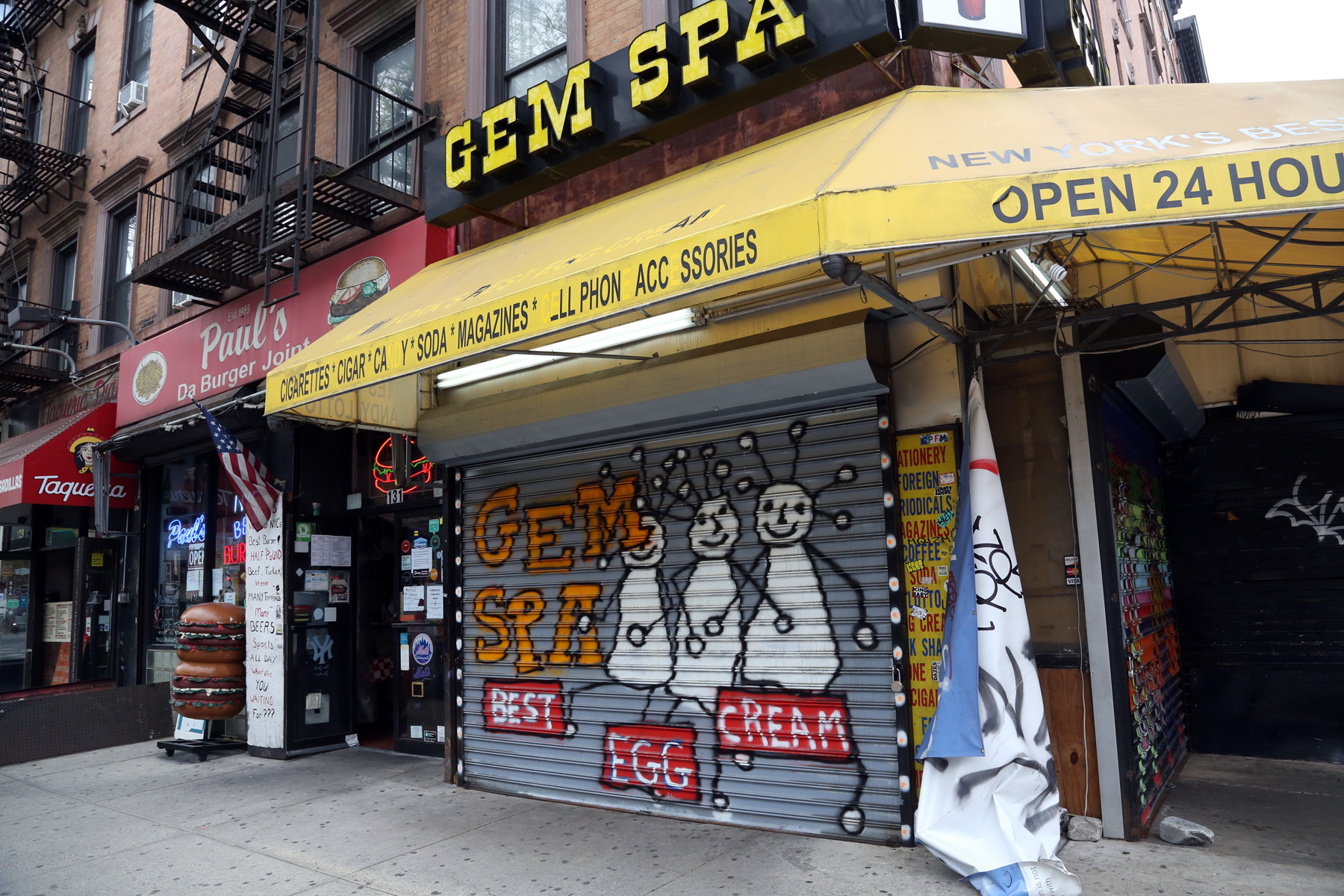 Gem Spa, along with an earlier incarnation of the store, has anchored the corner at St. Mark's and Second Ave. since the 1920s. (Photo by © Jefferson Siegel)

Even before the coronavirus crisis, the historic East Village store — famed for its egg creams and, formerly, its newsstand — was hanging on by a thread.

To raise funds, it was selling a line of Gem Spa-wear, including knit caps and T-shirts, plus photos by neighbor Godlis of Madonna filming a scene from “Desperately Seeking Susan” in front of the place.

On Thursday evening around 9 p.m., the owners issued a statement on Twitter and Instagram saying the store has “closed its doors forever”:

It is with a heavy heart that we announce Gem Spa has poured it’s last legendary egg cream and closed its doors forever. This has been an extremely difficult decision, and one we are heartbroken o make. We were… https://t.co/3OQmnEQ4l0

“It is with a heavy heart that we announce Gem Spa has poured it’s last legendary egg cream and closed its doors forever. This has been an extremely difficult decision, and one we are heartbroken to make…

“We were forced to close the store due to New York City and State Covid restrictions 6 weeks ago in the interest of the safety of our customers and staff hoping to reopen when things stabilize. Prior to this crisis, it had become increasingly apparent that the evolving character of the area was no longer available to sustain a corner creation like ours…

“Coronavirus concerns closed our city, cratered businesses, and ultimately sealed the fate of our close to 100 year old shop. After careful review and assessment of our options, we have made the heartbreaking but necessary decision to close permanently.

“We have enjoyed the most incredible love, support, loyalty and friendship from our neighbors, city, and visitors from around the world. We are, and always will be, eternally grateful to the historical artists, musicians, designers and dedicated denizen’s who saw us as much more than a beloved bodega but an iconic East Village institution…

“Although our doors are closing, we will live on through our website (https://gemspanyc.com) where we will be highlighting more of our rich history and the iconic figures that have made us who we are. We will also continue to sell Gem Spa branded merchandise as well as art, books & photos inspired by our store…

“There are so many people, organizations and members of the media that we would like to thank but we will do so in a separate post to acknowledge the heartfelt contributions of all of these people.

“The Patel family would like to thank you our extended family for all the beautiful memories and for the opportunity to serve you. We hope that all of you are staying safe and in good health. Lots of love from all of us to all of you.”

Gem Spa’s Instagram page features photos of famous people and celebrities with connections to the store, from Yippie activist Abbie Hoffman — who organized his “raid” on the New York Stock Exchange there — to Robert Mapplethorpe and Patti Smith, who enjoyed its egg creams, to Courtney Love, who filmed a movie scene there.

The iconic store, at Second Ave. and St. Mark’s Place, has been named Gem Spa since the 1950s and, before that, had operated under a different name since the 1920s. The “gem” in Gem Spa was an acronym of the former owners’ wives’ names.

It reportedly may have been where egg creams first got their start in America.

Eagle-eyed photographer Jefferson Siegel had recently seen a tweet that the store had closed permanently. Early Thursday afternoon, The Village Sun reached out and confirmed the sad news.

In a phone interview around 2:15 p.m., Parul Patel, whose father is Gem Spa’s owner, told The Village Sun that they would be putting out a statement very soon.

“Yeah, well, we were in a very difficult situation and we will be issuing a statement shortly,” she said. “It was awful before this…and now… .”

In a second phone call a bit later, she said the statement would be posted in the evening…and it was.