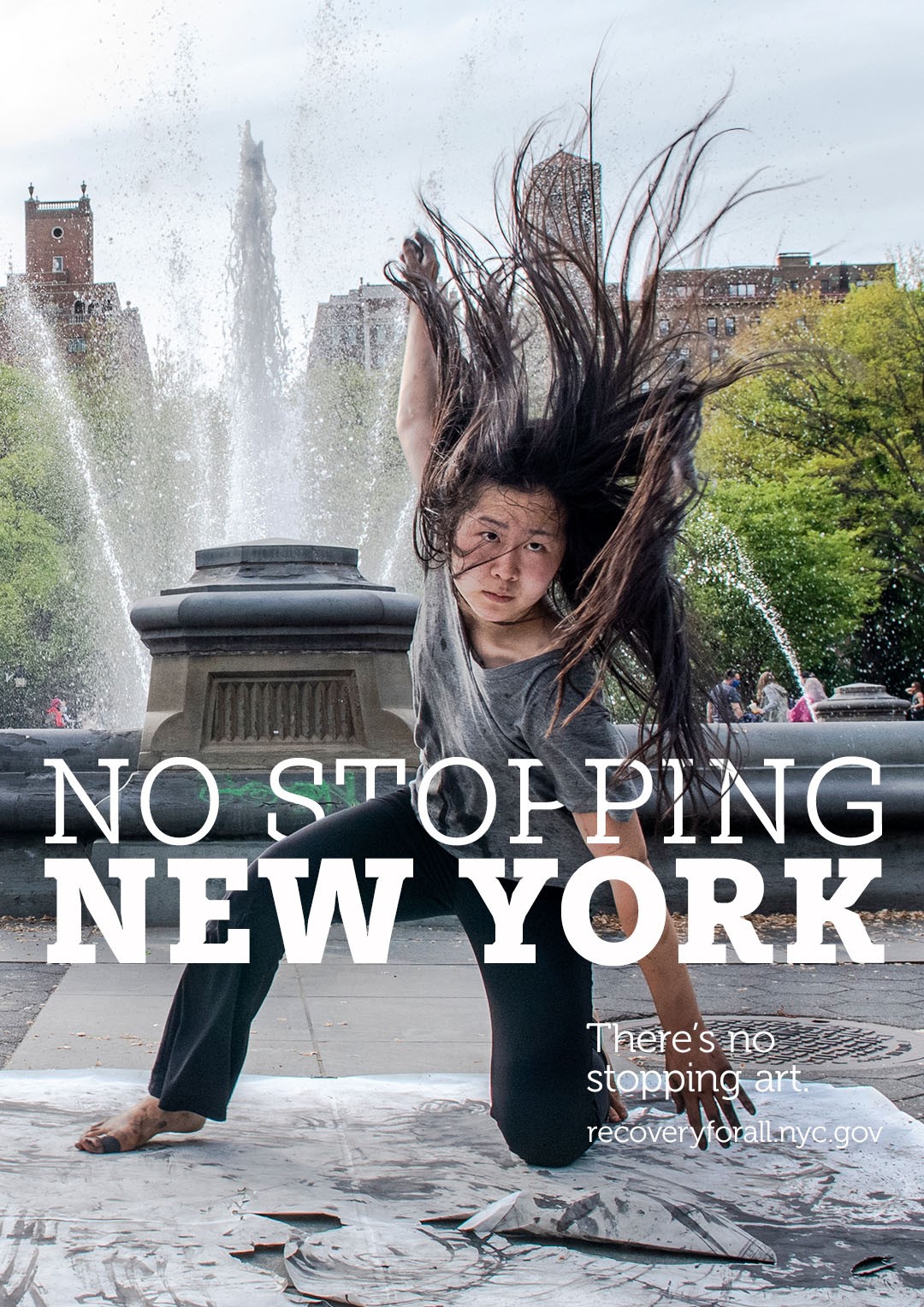 The city is using a photo of Kanami Kusajima dancing in Washington Square Park as part of its No Stopping New York recovery campaign.

BY LINCOLN ANDERSON | When Kanami Kusajima performs her sumi-ink dances in Washington Square Park, she’s in her own zone, in a Zen-like state. In fact, she kneels on the ground facing the arch and meditates briefly beforehand to get in the proper mindset — or lack of mind.

As she then starts to dance atop the canvas, she deliberately slashes her feet and hands through the ink, creating swooshes, smears and Jackson Pollock-like drizzles. Eventually, she rolls and sloshes her entire body about in the sumi. The result is a riveting dance performance — plus, a unique, though sometimes ripped, piece of artwork.

But now there’s something else on the dancer’s mind, intruding on her artistic bliss and focus: the fear that police or Park Enforcement Patrol officers, at any time, could order her to shut off the small speaker she uses to play music to accompany her performances. The tunes are essential to her art, she says.

It’s ironic because the city is currently using a photo of Kusajima dancing in the park in an ad as part of its No Stopping New York recovery campaign.

On Aug. 19 as she was doing her usual performance, two police and two PEP officers came up and told her she could not use the mini-speaker because it violated the park’s rules on amplified sound. In order to use amplified sound in the park, they explained, you must have a permit, per a long-standing rule on the books.

As Kusajima has noted before, though, her JBL Charge 4 speaker has a maximum volume of only 80 decibels, which is lower than acoustic drums, which can get as loud as 100 decibels. But the officers shrugged that the rules are the rules.

Five days later, a cop again confronted her and told her she could not use the speaker.

“They are taking advantage of my art for their advertisement purpose, and they don’t support me at all,” she protested. “Instead they crack me down. This makes zero sense.”

Kusajima’s situation previously came up at a raucous Community Board 2 meeting on July 21 about Washington Square Park. A young speaker questioned Captain Stephen Spataro, the Sixth Precinct’s commanding officer, about the clampdown on amplified noise, specifically asking why they are doing enforcement against the Japanese dancer with her low-power speaker. The man claimed officers had actually confiscated her speaker.

“You couldn’t hear it 20 feet away,” he scoffed. “We’re talking about a tiny, shoebox-size amplifier. This blanket policy is wrong for everybody.”

However, Spataro said police must do “consistent enforcement” on amplifiers, otherwise there would be “accusations of unequal enforcement.”

Kusajima, though, told The Village Sun: “They did not confiscate my speaker, but they told me not to use it. But music is an important part of my art form and that is essential for me. I should be allowed to use this speaker because New York City government admits that street performances are a part of New York culture by using my photo for their ad.”

She has employed the speaker since she first started performing in the Greenwich Village landmark park at the end of last November.

In March, Kusajima first told The Village Sun that PEP officers had warned her about using the speaker. Back then she started a petition, asking for the creation of an affordable “buskers permit.” She said that, as someone who performs in the park daily, she can’t afford $70 a day for a sound permit. There is also a $25 special-event sound permit, but that’s only for one-day events, she noted.

Her petition also advocates for legalizing certain types of small amps, plus allowing amps if they operate below a decibel threshold, which would have to be established.

Despite having now received several warnings, she persists in using the amp as she dances and “paints” in the park.

The mini-amp was on when two people came to take her photo for the No Stopping New York recovery ad.

“I was of course using the speaker and performing,” she said. “They like this form of my art and that is why they decided to talk to me to let me be a part of the project.”

“I should have a right to keep my art form for my artistic expression,” she declared, “especially when it is not disturbing any neighbors around the park and New York City government is acknowledging by using this photo that street performance is a part of New York culture.”

Meanwhile, as she whirls about and contorts her body, she continues to be mindful of what could intrude on her performance.

“Yes, I need to be prepared mentally every time I perform,” she said. “Being ready to explain my right as an artist and this contradiction with the No Stopping New York ad.

“I’ve had racial slurs yelled at me, three attempted robberies — but people saved me and all of them failed, I didn’t lose any money,” she said. “So I got used to it. I am mentally ready for any possibilities which might happen to me. Every day.”