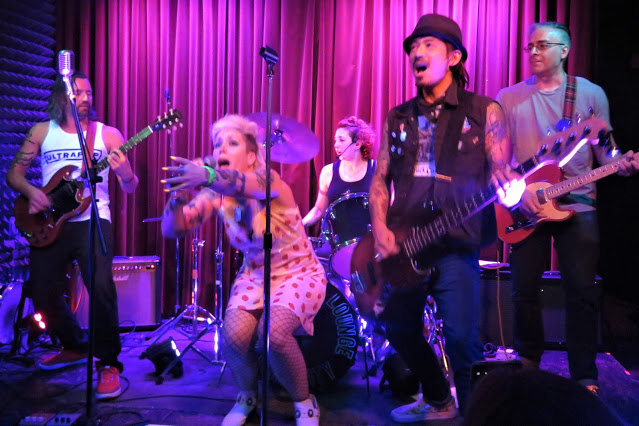 Bikini Carwash performed at the Parkside Lounge on East Houston St. on July 24. The venue's final concert before the lockdown in March 2020 was a superspreader event because no one knew yet about preventative measures like masks and social distancing. (Photo by Everynight Charley Crespo)

BY EVERYNIGHT CHARLEY CRESPO | Mayor de Blasio announced on Tuesday during a media advisory that, starting in two weeks, New Yorkers and visitors will need to show proof of COVID vaccination to engage in numerous congregate activities indoors.

Copying policies implemented in France and Italy, New York City will become the first major city in the United States where vaccinations will be required for all those wishing to dine in an indoor restaurant, drink at a bar, exercise at a gym or attend a live performance, for example. The municipal government will not mandate proof of vaccination for outdoor bars, outdoor restaurants or outdoor concert venues, among others.

So far, proof of vaccination is the only restriction that New York City will impose. Unlike in the past, social distancing, capacity limits and curfews will not be mandated for indoor businesses. Stricter protocols like lockdowns are not being considered.

De Blasio has publicly spoken about his proposed policy but has not yet put it down in writing. The Mayor’s Office will issue the regulations when they become mandatory procedure on Aug. 16. At that time, a four-week honor-code period will begin, allowing businesses to acclimate and the city to make adjustments. Inspections and enforcement are scheduled to start on Sept. 13.

“Today, I announce a new approach, which we’re calling the Key to NYC Pass,” the mayor said. “The key to New York City — when you hear those words, I want you to imagine the notion that because someone’s vaccinated, they can do all the amazing things that are available in this city. This is a miraculous place, literally full of wonders. And, if you’re vaccinated, all that’s going to open up to you. You’ll have the key. You can open the door.

“But, if you’re unvaccinated, unfortunately, you will not be able to participate in many things. That’s the point we’re trying to get across. It’s time for people to see vaccination as literally necessary to living a good and full and healthy life.

“The Key to NYC Pass will be a first-in-the-nation approach,” the mayor said. “It will require vaccination for workers and customers in indoor dining, in indoor fitness facilities, indoor entertainment facilities. This is going to be a requirement. The only way to patronize these establishments indoors will be if you’re vaccinated, at least one dose. The same for folks in terms of work, they’ll need at least one dose.

“This is crucial because we know that this will encourage a lot more vaccination,” he continued. “We’ve seen it already. We’ve seen the impact of the mandate we put in place for city workers already starting to move people to vaccination. We’ve obviously seen the positive impact of incentive, as well. The goal here is to convince everyone that this is the time. If we’re going to stop the Delta variant, the time is now. And that means getting vaccinated right now.”

Impact on the live-music industry

In August, however, these and all other venues will require proof of vaccination not only from customers, but also from performers and staff. City Winery, a forerunner in the vax-only movement since 2020, predated the mayor’s announcement and went even further. The Chelsea venue announced last week in an open letter that, starting this past Monday, the franchise would implement a vaccination-only or negative-test policy at all of its 12 venues in eight cities.

The unvaccinated will be unwelcome even at some outdoor events, like the five NYC Homecoming Week concerts that the city is sponsoring in August.

Unless the venues themselves declare otherwise, unvaccinated music fans will be limited to attending large outdoor concerts at Citi Field and Forest Hills Stadium, as well as midsized park series at SummerStage Central Park and the Celebrate Brooklyn shows in Prospect Park. Many smaller venues, like the Anyway Café, Baby Brasa, Café Wha, Groove, Marshall Stack and Rue-B, have viewing areas outside.

The biggest dilemma involves dozens of larger music venues that were to re-enter the live music circuit in August and September and have already sold hundreds of tickets to unvaccinated customers. These include Barclays Center, the Bowery Ballroom, the Brooklyn Bowl, Brooklyn Made, Brooklyn Steel, the Gramercy Theatre, Irving Plaza, Madison Square Garden, the Music Hall of Williamsburg, Terminal 5, Warsaw and Webster Hall, among many others. All of these venues booked and are selling tickets for concerts into 2022.

More than likely, this new policy will create a reassessment by concert promoters and venue operators regarding the ever-fluctuating state of the live-music industry. Larger venues, from arenas to theaters and large clubs, have already sold tickets to forthcoming events without being able to inform the ticket holders that they must be vaccinated to gain entry.

Current staff within the hospitality industry will need to be vaccinated in order to keep their jobs. This will happen at a time when many bars, restaurants and concert venue managers presently report an ongoing shortage of staff. Requiring new hires to be vaccinated will further limit the available pool of employees.

“Mandating vaccine requirements for restaurant and bar employees and customers to work and dine indoors is a very difficult step, but ultimately may prove an essential move to protecting public health and ensuring that New York City does not revert to restrictions and shutdown orders that would again absolutely devastate small businesses that have not yet recovered from the pandemic,” Andrew Rigie, executive director of the NYC Hospitality Alliance restaurant group, posted.

“Not everyone’s going to agree with this, I understand that, but, for so many people, this is going to be the lifesaving act — that we’re putting a mandate in place,” the mayor concluded. “It’s going to guarantee a much higher level of vaccination in this city, and that is the key to protecting people and the key to our recovery. That’s why it’s the Key to NYC. The Key to NYC pass opens a lot of doors and we need it.

“We’ll be issuing a mayoral executive order and a health commissioner’s order — those are the legal tools necessary to implement this approach,” de Blasio explained. “And we know that this is what’s going to turn the tide. And we also know that people are going to get a really clear message — if you want to participate in our society fully, you’ve got to get vaccinated. You’ve got to get vaccinated. It’s time.

“All the answers, all the information’s out there,” the mayor added. “You’ve seen over 160 million Americans get vaccinated safely. You’ve seen it make the difference. The only reason we’re having the recovery is vaccination. So, it’s time. And this is going to send that message clearly. And the Key to NYC Pass, this is an easy approach. Because to confirm vaccination all you need is your vaccination card or the NYC COVID SAFE app, or the Excelsior app from the state — any of those will do. So, it’s simple. Just show it and you’re in.”