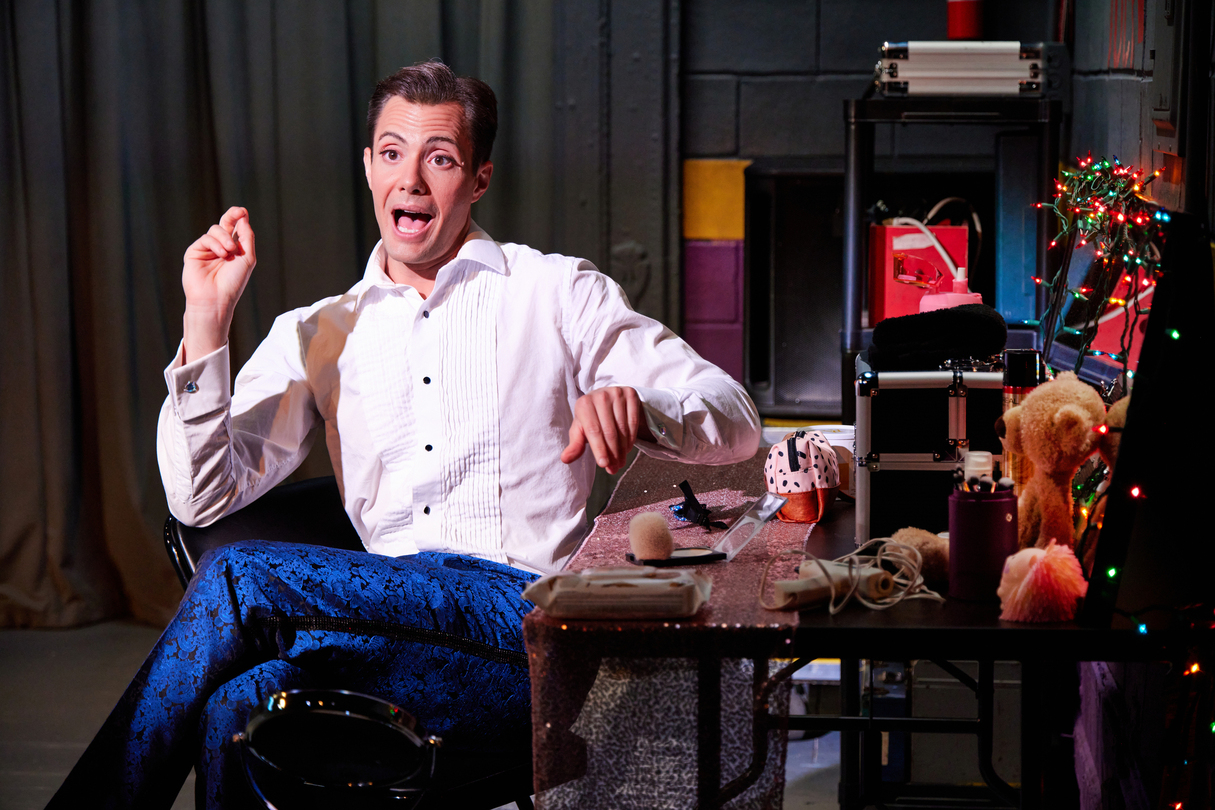 In ‘Mister Miss America,’ a tradition for the untraditional takes center stage

BY BETSY KIM | In the one-person show, “Mister Miss America,” written and performed by Neil D’Astolfo, Derek Tyler Taylor, a 24-year-old Miss Southwestern Virginia beauty contest contender, shines the spotlight on one central message: Freedom to express yourself with the honesty of who you are and finding an audience of acceptance is not always easy — for anyone. But it’s worth the struggle, whether for a local pageant where the runner-up wins a $150 gift certificate to The Lady Mirage Day Spa or for aspirations beyond Broadway.

The 86th annual tradition runs through some Southern tropes. An announcer introduces contestants with lines like, “Hotter than your pappy’s pistol … It’s Miss Bristol, Alicia Simpcox!” and “Sugar and spice and everything not-so-nice… It’s Miss Galax, Murphy Denison!”

Derek’s archrival is the favored, Bible-thumping Miss Roanoke, Kimber Leigh Dixon. Pointing to the Southern penchant for middle names, he notes her name is not Kimberly but “Kimber Leigh,” with her cosmetics bag monogrammed KLD.

The All for One Theater production at the Rattlestick Playwrights Theater, at 224 Waverly Place, has an intimate feel. The show depicts a cross-dressing protagonist defying mores in a small Southern town. It’s being staged in a community, Greenwich Village, where such expressions historically have thrived but once were cloistered and subject to police raids. In 1969, the Stonewall Uprising, where people stood up for the rights of gay men and lesbians, began only a five-minute walk from the venue.

Drag shows are nothing new in this neighborhood, nor by now, across the country. What’s worthy of contemplation is how a seemingly over-the-top, local production hits issues of national significance. Discrimination continues to run rampant, heightening the play’s relevance beyond mere entertainment.

At one point, he almost quits, explaining that the judges and audience see him just as a joke, as he puts it, “a 10-pound Virginia ham on that stage.”

“They’re all thinkin’, ‘Look at this faggot prancin’ around like he’s got an actual shot in hell at this title. How pathetic,’” Derek says.

Yet he goes forward with the talent portion of the contest, energetically giving his all to an athletic, lip-syncing blitzkrieg. Derek takes on songs and acting clips in a lightning round pastiche from “Gypsy,” “I, Tonya,” “Mommie Dearest” and other highly recognizable, iconic performances.

Why? He had held a 15-year dream to get on the stage to showcase his talent. Throughout his childhood, no one supported his being different or “special.” But in an arduous trip to New York City to see Patti LuPone, the celebrity encouraged him to knock down the barricades. With determination, he would express his true self, with whom other “special” children could identify, and feel reassured in chasing their own dreams and being who they are.

Although this seems to be a simple message, hate crimes plague our society. The FBI releases statistics of crimes motivated by prejudice based on race, gender and gender identity, religion, disability, sexual orientation and ethnicity. For 2020, the agency reported 8,052 single-bias, hate crime incidents involving 11,126 victims.

The preview’s soundtrack paints a supportive audience, downplaying Derek’s courage in appearing as the sole beauty queen in drag. Yet, with the stakes representing something beyond a quirky small-time event, he faces a dramatic moment that asks how far he’ll go in the fight to win. Who is he willing to become to beat an opponent, whom he notes is a hypocritical and dishonest one? He answers the challenge of consistently speaking his own truth — in this rather untraditional morality play confronting today’s world.