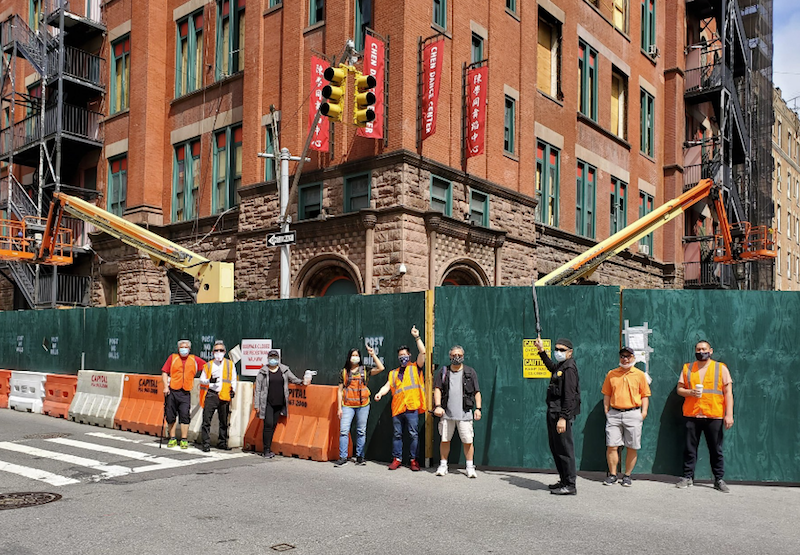 In Chinatown, future of fire-damaged center is a hot issue

BY THE VILLAGE SUN | Preservationists, local activists and community members are joining forces in a desperate effort to save one of Chinatown’s most historic buildings from the wrecking ball.

On Sat., June 27, at 2 p.m., they’ll rally outside 70 Mulberry St., the former P.S. 23. They’ll gather at the northeast corner of Columbus Park, at Mulberry and Bayard Sts. (Participants are to wear face masks and practice social distancing.)

The classic building, which, in more recent years, served as the Chinatown community center, was seriously damaged by a fire on its upper floors in January, which displaced its nonprofit tenants.

The fire was “deep-seated in the roof area” of the old school — reportedly causing the roof to collapse — and was difficult for firefighters to battle.

Constructed in 1891, it was the first school designed by New York City schools architect CBJ Snyder, who would go on to build 170 schools in the city, most still in use today.

Sited in Chinatown’s historic core, the former P.S. 23 is a contributing building to the Chinatown and Little Italy National Register Historic District.

The nonprofits displaced by the fire included the Museum of Chinese in America — which housed its archives there — H.T. Chen & Dancers and a senior center run by Chinese American Planning Council.

After the fire, Mayor de Blasio promised to reconstruct the old school. Since then, however, his administration has proceeded full-speed ahead with demolition.

Nevertheless, dozens of people testified in favor of restoring the existing building at the Community Board 3 Land Use Committee meeting last month. Advocates said they don’t want a high-rise tower at the site or, on the other hand, years of an empty lot sitting there due to lack of funding.

In early June, constituents sent more than 300 letters to the mayor and local politicians calling for the structure’s restoration.

Saturday’s protesters are calling for stopping the ongoing demolition, retaining a fully independent structural engineer with preservation experience, and developing an independent analysis of the costs and the timetable of restoring the existing building versus building a new one.

Above all, the protesters want the city to fully fund the building’s restoration and rehabilitation, and to complete it as quickly as possible.

At a virtual town hall meeting on Thurs., June 25, about the old P.S. 23’s fate, an independent structural engineer hired by the city conceded that the building could be repaired if the effort is made.

At their full-board meeting last month, Community Board 3 members engaged in a vigorous debate on a resolution about 70 Mulberry St. The original resolution called for the city to immediately stop demolishing the building.

After a lengthy discussion, though, the board members modified the resolution to support razing the old school down to the first floor “without further delay.”

The board further called for an independent structural engineer with historic preservation expertise to inspect the ground-floor structure and produce an inspection report for C.B. 3 by the end of June.

“The result of this report shall be substantially considered in the future plan for the site of 70 Mulberry St.,” the resolution notes.

Chinatown activist Karlin Chan, a C.B. 3 member and one of the rally’s organizers, unsuccessfully lobbied for the original resolution.

He recapped the developments since the fire.

“The city deemed the upper floors unstable due to fire damage and imminent danger of collapse, so crews have been working to demolish floors three through five these past several months,” Chan told The Village Sun. “The Department of Citywide Administrative Services made a presentation at the C.B. 3 Land Use Committee and said a full demolition of the building had been deemed necessary but offered no details.

“While the Landmarks Preservation Commission has weighed in, stating 70 Mulberry was not eligible to be landmarked due to ‘significant’ alterations, many of us in the community believe enough of the original structure remains and is worthy of being saved, even if they have to remove the lower floors’ stonework piecemeal and replace it after a new superstructure is built.

“Even if the building doesn’t meet L.P.C. standards for landmarking,” Chan added, “it does have significant historical value, not only to the many immigrant groups it served as P.S. 23, but to the city as a whole.

“P.S. 23 served as a prototype for the hundreds of public schools CBJ Snyder helped design in a 31-year career with the Board of Education,” he noted. “While we all agree the building should be rebuilt and returned for community use, I oppose the rush to demolish the whole structure till an independent structural assessment has been done and the city presents actual plans for the replacement building and site.

“With a recession looming because of the pandemic,” he warned, “it is naive to believe a full demolition will expedite a new building in two or three years.”

Meanwhile, for her part, Councilmember Margaret Chin called on the city to “improve transparency and public engagement” around 70 Mulberry St.

“While I am thankful that City Hall granted the community’s requests for a town hall on 70 Mulberry to allow residents to help shape the future of this building, the community must be prepared [by being given] the information we need to share our feedback,” she said in a statement.

“I urge the city to immediately release the name and credentials of the third-party contractor, as well as the full engineer’s report,” she said, adding, “It is unacceptable that we still have not received this information.”

Chin added, “70 Mulberry is a building that has carried deep reverence and history in the Chinatown community for generations. Any process deciding its future must be handled with the same weight and respect.”

The councilmember further called for the city to create “a comprehensive community engagement process that sets clear benchmarks for accountability and fully involves the displaced tenants and the community in the building design pre-planning process and throughout the construction timeline.

“The sentimental and historical value of 70 Mulberry is immeasurable,” Chin said, “and I urge the city to take the necessary steps to preserve the building’s historic architectural design as much as possible.”

As of now, the city has agreed to halt the demolition at the building’s third floor, and provide 90 days to do engagement with the displaced nonprofit tenants, local politicians and community stakeholders on the future of the building and the site.