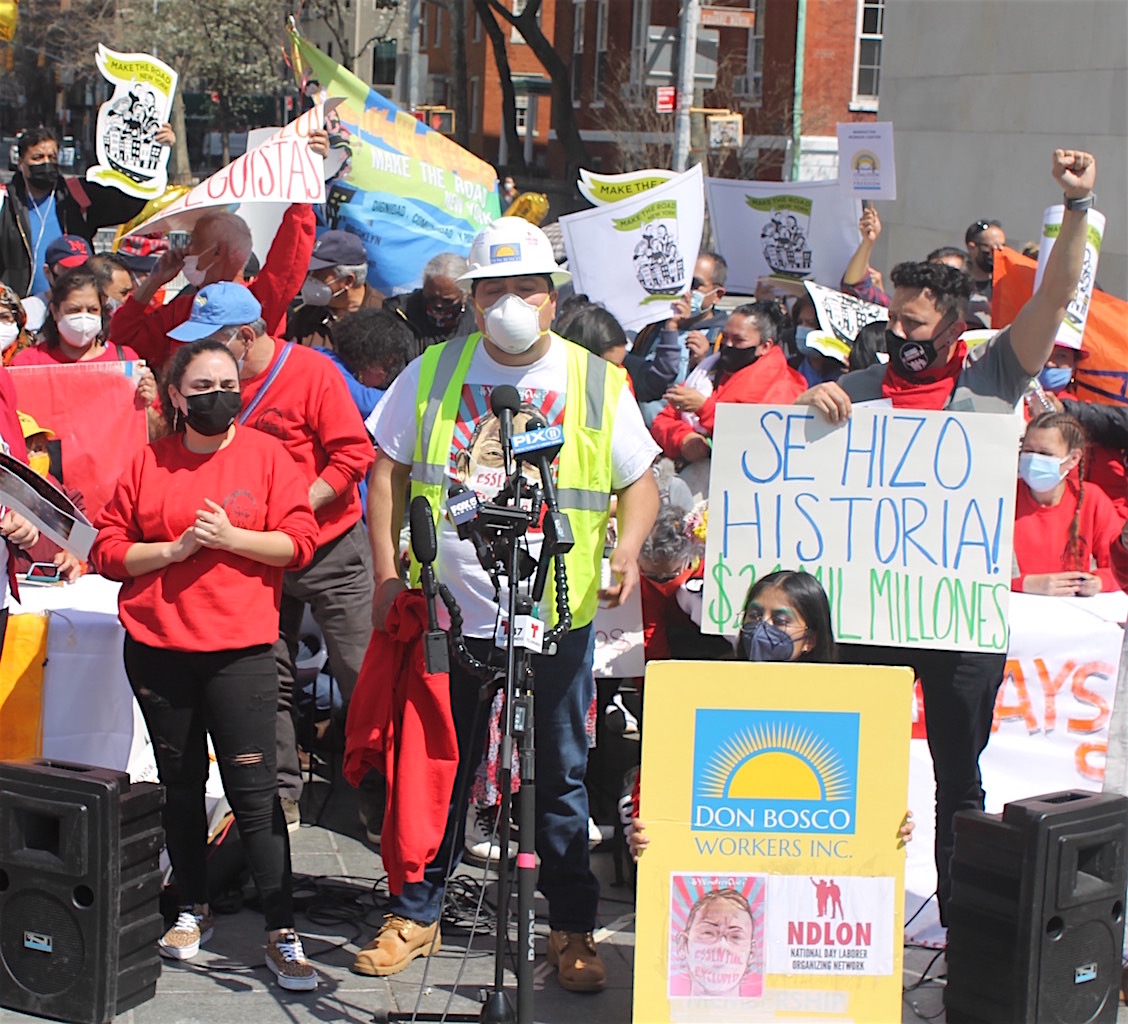 Pedro Pena, center, was a hunger striker in Westchester. (Photo by The Village Sun)

BY LINCOLN ANDERSON | Immigrant workers celebrated in Washington Square Wednesday afternoon as Albany was poised to allocate $2.1 billion for “excluded workers” who lost wages or income due to the pandemic.

Also celebrating among them were hunger strikers for the cause, who finally ended their 23-day fast by digging into some solid food.

One group of hunger strikers was based nearby on the Open Street at Thompson St. and, at night, at Judson Church, the home of the New Sanctuary Coalition. Another was in Westchester.

Speakers hailed the victory as not just about the money but also a win for dignity and respect and against xenophobia.

“This country is about freedom and liberty — how you get it, you have to fight in the streets,” said one.

The opposition, however, to the excluded workers fund in some quarters was disheartening for the activists.

“We have a lot of work to do to dismantle the racist rhetoric we heard in New York this week,” another speaker said.

Eliana Jaramillo said she has worked as a street vendor for 38 years. With the relief funds, she can now pay off her debts, she said.

“We will fight to say we are essential workers,” she declared. “We will never be pushed under the table. We are never going anywhere.”

The fund covers the time period from March 27, 2020, to April 1, 2021. There are two tiers of benefits, one pays $15,600 total and the other $3,200. To qualify for the top tier, the worker must provide certain information, such as proof of having filed a tax return in the last three years or a letter from an employer showing dates of work and why he or she is no longer employed. To be eligible for the second tier, the worker must prove residency and identity.

About 213,000 workers in New York City will benefit from the fund, a big chunk of the 290,000 total in the state who qualify, according to advocates.

The Fund Excluded Workers Coalition included more than 200 groups across the state, among them Make the Road NY and NDLON (National Day Laborer Organizing Network).