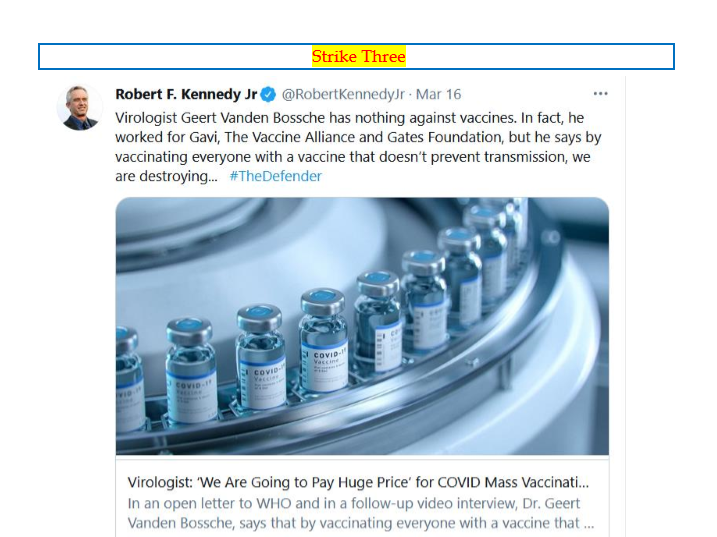 One of the tweets by R.F.K. Jr. on the COVID vaccine that violates Twitter's policy on spreading "misleading information," according to Brad Hoylman.

BY THE VILLAGE SUN | Two weeks ago, state Senator Brad Hoylman called on Twitter C.E.O. Jack Dorsey in a letter to permanently suspend Robert F. Kennedy Jr.’s Twitter account, along with that of the organization he founded and chairs, Children’s Health Defense, for repeatedly spreading misinformation about the efficacy and safety of COVID-19 vaccines.

“Mr. Kennedy’s and Children’s Health Defense accounts — which often tweet the same misinformation — have a combined 280,000 followers on your platform and reach exponentially more people through retweets,” Hoylman wrote the tech tycoon. “These Twitter accounts seek to dissuade people from receiving what is widely heralded as a lifesaving vaccine at a time when concerns are being raised about a third wave of COVID-19 spreading across the country. … I strongly urge you to permanently suspend both Twitter accounts.”

Dorsey so far has not responded.

Twitter itself has not flagged any of these tweets by Kennedy or his organization for violations. But Hoylman has identified offending sections from the articles cited in a total of 12 tweets — six by the iconic anti-vaxxer and six by his C.H.D. — then stated which clauses of Twitter’s policy they violate.

According to Hoylman, R.F.K. Jr. and C.H.D. should thus be permanently banned on the basis of Twitter’s policy. For similar reasons, Facebook recently removed Kennedy’s personal Instagram account for “repeatedly sharing debunked claims about the coronavirus or vaccines.”

Last week, however, Kennedy responded to Hoylman’s letter with one of his own, quoting “Game of Thrones” author George R.R. Martin, challenging Hoylman to a Zoom debate on science. R.F.K. Jr. cited a quote by Tyrion Lannister, the wily dwarf nobleman:

“R.R. Martin observed that when a government official like yourself ‘tears out a man’s tongue, you are not proving him a liar, you’re only telling the world you fear what he might say.’ Instead of asking Mr. Dorsey to tear out my tongue, I invite you to debate me publicly on these important issues about which you claim to have expertise.”

But the state senator said that publicly debating R.F.K. Jr. would only give more exposure to his anti-vax views.

“Robert F. Kennedy, Jr.’s rantings and citations of debunked pseudoscience add nothing to our national discourse,” Hoylman said. “We won’t take the bait — and we are not going to give him a platform to continue to spread medical disinformation through a debate.

“Scientists agree: These conspiracy theories are wrong and pose a danger to our public health,” the state senator asserted.

“As COVID cases continue to increase worldwide, we need to stand together and show the public that these vaccinations are safe and effective,” Hoylman stated. “The only way we will finally defeat this pandemic is if we get vaccinated. I encourage Kennedy to get vaccinated as well.”