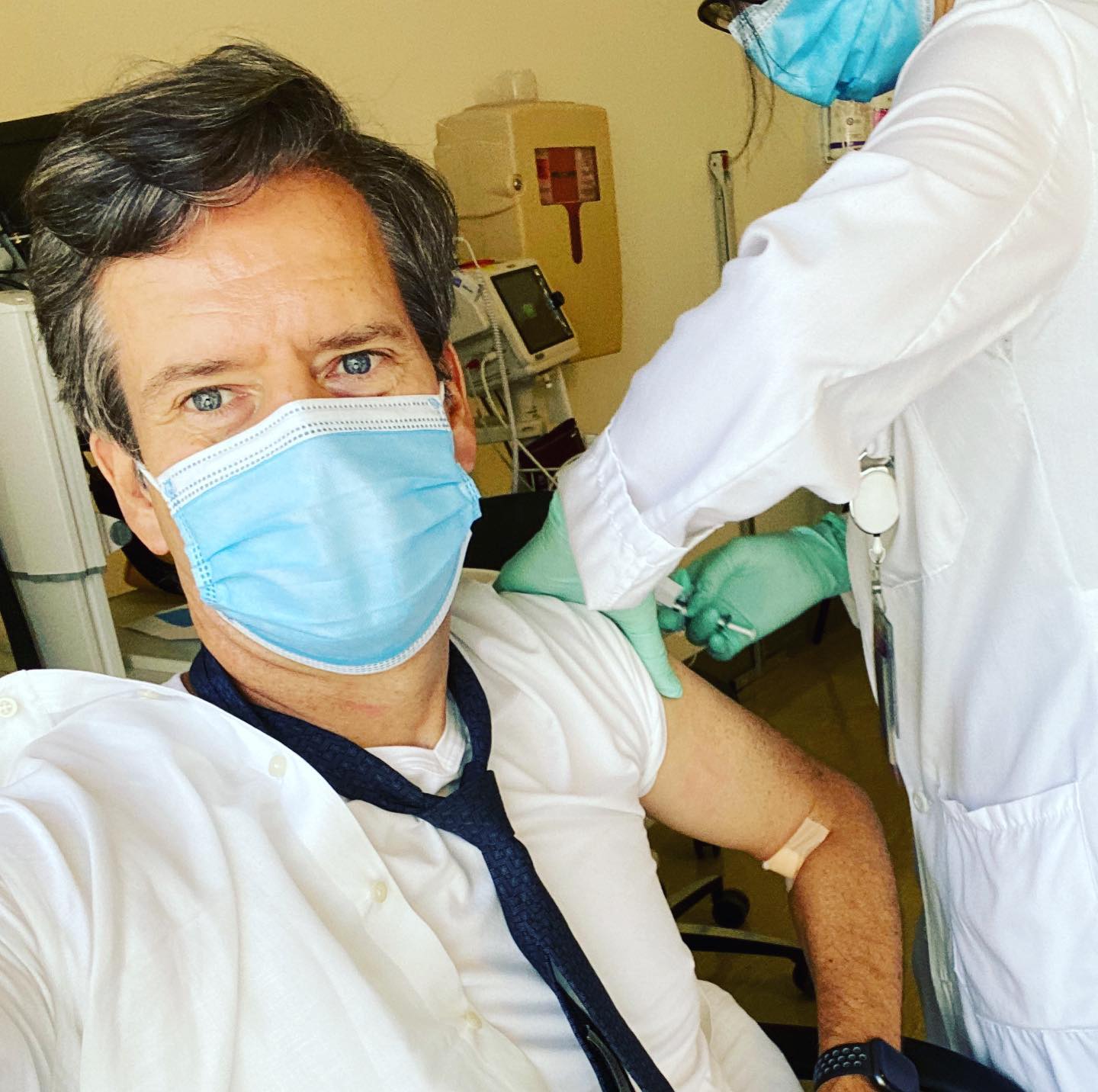 Brad Hoylman getting his first shot of a COVID trial vaccine at N.Y.U. Langone back in August. He recently got a second shot. (Courtesy Brad Hoylman)

BY LINCOLN ANDERSON | Brad Hoylman has confidence in the process to find a vaccine for COVID-19. In fact, he’s even participating in one of the trials.

What doesn’t inspire confidence for him, though, is President Trump’s full-court press to make a vaccine available before the upcoming Nov. 3 election — less than two weeks away.

The state senator, who is currently running for Manhattan borough president, is participating in the Pfizer vaccine trial, one of four late-stage clinical trials. The other companies racing to find a vaccine include Moderna, Johnson & Johnson and AstraZeneca. However, the latter two companies have had to pause their studies due to “adverse events” — meaning people have gotten sick due to the shots.

In an interview with The Village Sun on Monday, Hoylman, who lives in Greenwich Village, gave a report on his own experience in the study.

To date, he has received two shots of the vaccine, spaced three weeks apart. The Pfizer trial is being led by New York University Langone’s Vaccine Center.

Hoylman did experience some side effects, which makes him sure he wasn’t given a placebo, which 50 percent of the trial participants received.

After the first dose, he got a migraine that lasted a few days — although he noted, “I’m prone to migraines anyway.”

“The second dose wasn’t pleasant,” he admitted, noting the symptoms kicked in the evening after he received the shot.

“It’s been a few weeks now since my second dose,” he said. “There are some short-term side effects, similar to what you might get with the shingles vaccine — mild fever, some muscle aches and some fatigue. It lasts about a week in my experience, but everybody’s body is different.”

Hoylman won’t be getting any more shots. But, as part of the vaccine trial, he will go in for another checkup on Feb. 3 and then will be monitored for two years.

That much, at least, is clear.

What is not clear — or definitely not acceptable — to Hoylman is what he called Trump’s “erratic” approach to the vaccine.

“It’s sad that Trump has created so much confusion around the issue of COVID generally and specifically the F.D.A.’s work on a vaccine,” the state senator said. “It’s sad because the F.D.A. and N.I.H. have led the world on vaccine research — and through his political agenda he’s tarnishing what I consider to be a crown jewel of our scientific and healthcare infrastructure that has helped lead the world.”

Earlier just that day, Trump had criticized Dr. Anthony Fauci, the iconic director of the National Institute of Allergy and Infectious Diseases, calling him “a disaster” and saying, “People are tired of COVID.” Fauci had publicly stated on “60 Minutes” that he “wasn’t surprised” Trump got infected after seeing the president at the Rose Garden ceremony for Supreme Court nominee Amy Coney Barrett, where most people were not wearing masks.

In short, he said, “The only way we’re going to have confidence in a vaccine at this point, is if Trump loses the election.”

“Trump is using the vaccine as a weapon,” Hoylman charged. “He’s a bumbling fool and the only thing he cares about is getting reelected. His presidency, by definition, undermines science, whether it’s on vaccines, climate change, reproductive healthcare. This is the most anti-science administration in American history. So it follows that America would not follow Trump’s vaccine.

“But should Biden win in a couple of weeks,” he said, “we’ll be able to reset the conversation, and hopefully Americans’ trust in the vaccine approval process will be restored.”

Meanwhile, Trump is counting on a vaccine as a trump card in his quest for a second term.

“He’s claiming credit for Operation Warp Speed and wants to have a vaccine ready before Nov. 3 to prove his mastery over COVID,” Hoylman said, referring to the federal vaccine effort. “But we all know that’s a joke. Two hundred thousand Americans have died because of his erratic approach to the virus.

“The fact is,” the politician continued, “scientists don’t want a vaccine to be distributed before the start of next year. I think Trump has lost that battle, but in theory he could override [that timetable] to give him a political win before Nov. 3.  … Nobody wants a vaccine that’s rushed to market before it’s safe.”

According to reports, Pfizer C.E.O. Albert Bourla last Friday said the company could ask U.S. officials to clear its coronavirus vaccine for emergency use as soon as late November — in other words, not before the election. Moderna has said it may know by next month if its vaccine is effective.

Beyond his push for an accelerated vaccine, Trump’s leadership has been sorely lacking on the pandemic, in general, the state senator added.

“He’s the superspreader in chief,” Hoylman scoffed of Trump, who is variously either anti-mask or “equivocal” on the subject, as the pol put it.

“It’s maddening because lives are at stake,” he said.

In addition, some people have even wondered if Trump really did have COVID or if it was all just a reality TV-like act played for political advantage.

“I won’t speculate on that,” Hoylman said, “except to say because this administration is the most dishonest in American history, it’s no wonder people question every statement coming from the White House these days.”