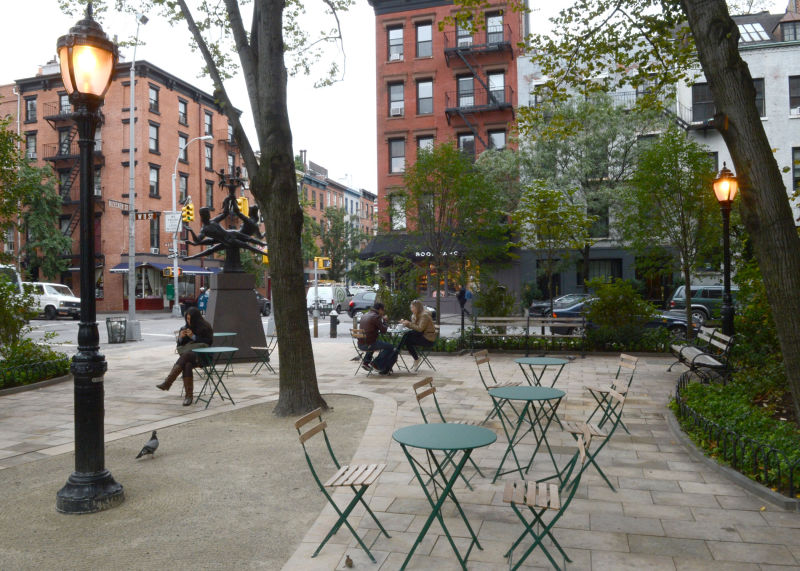 BY ART GATTI | It was 1993. A coalition that took over Community Board 2 were dead set on removing all the benches outside and around the Bleecker Playground at the mouth of Bleecker St., at Eighth Ave./Hudson St.

This group, living around the area, were recent co-op investors who saw their property values challenged by the frequent nighttime population of the homeless in the benches area of that tiny park. Many were young parents, and they wanted to turn the entire area into a playground.

But there were additional recreational spaces in the area for their kids — especially Seravalli Playground a few blocks north. There was no real need to remove the park that was always there for adults.

At the time, Abingdon Square Park across the street was dismal. It had a four-seat swing and a slide. The benches around these sad fixtures were usually filled with locals, especially seniors from the rest home on Hudson St. across the street. It was a normal thing to see the nearby Bleecker Playground benches also filled with the elderly during the day.

Opposition to the plan to remove all sitting areas grew among us long-term local residents, and it was spearheaded by The West Village Committee and its charismatic leader, Bill Bowser. It became a bitter fight that spread over 18 months. The outcry was widespread. Who were these cheeky newcomers?

The plan for the park renovation had been planned and launched at Community Board 2 by being rammed through in a series of deceptively planned meetings that strategically avoided opposition. And once this board O.K.’d it, the city was automatically behind it… . It was a done deal. However, hearings went on for months…at the Department of Parks, at the Landmarks Preservation Conservation.

The famed sculptor and concentration camp survivor, Chaim Gross, donated the intriguing statue of a family that stands there today. When he was interviewed about the community board’s plan to ring the park with high chickenwire fencing, he simply replied that he didn’t like fences. Bad memories.

Push came to shove. Post holes were drilled for the fencing — and then the day came when Parks Department workers and trucks arrived to tear out the benches.

So we sat in…we being mostly seniors. This event became so instantly volatile that the city’s Parks Commissioner, Pat Pompasello, had to come to the small demonstration to try to quell it. But it would not be quelled. This hullaballoo went on for a while, when Pompasello was called to his car phone… . It was Mayor Dinkins.

City Hall had stayed out of the controversy, preferring to let the neighborhood work out its own issues. But after this call the workers and trucks were called off, drove away — and Pompasello disappeared into his city car and sped off. What had happened! We were in shock. And then we were jubilant — the park would remain as it was.

Several months later, the Parrot Jungle pet store, which once sat at the southeast corner of Bleecker and 11th Sts., became Magnolia Bakery, and soon thereafter the bench area became a dessert-eating mecca. Abingdon Square Park, diagonally north across the intersection, was renewed and beautified. And later, that disputed bench area off what we used to call “the Mommy Playground” — the hard-won combination of peaceful Bleecker Playground and Bleecker Park — was also remodeled and beautified.

Soon after the celebrating in ’93, it was discovered who the true benefactor/hero was. Yes, of course it was David Dinkins. But the man who got the mayor involved was a quiet shop owner, a portly black man with a leather store 50 feet from the 11th St. southern edge of the park. Seeing that senior citizens were getting ready to be arrested, he warned his good friend, Dinkins.

It was the early summer — and it wouldn’t look good in a few months at election time. Doing the politically practical thing, Dinkins did the right thing.