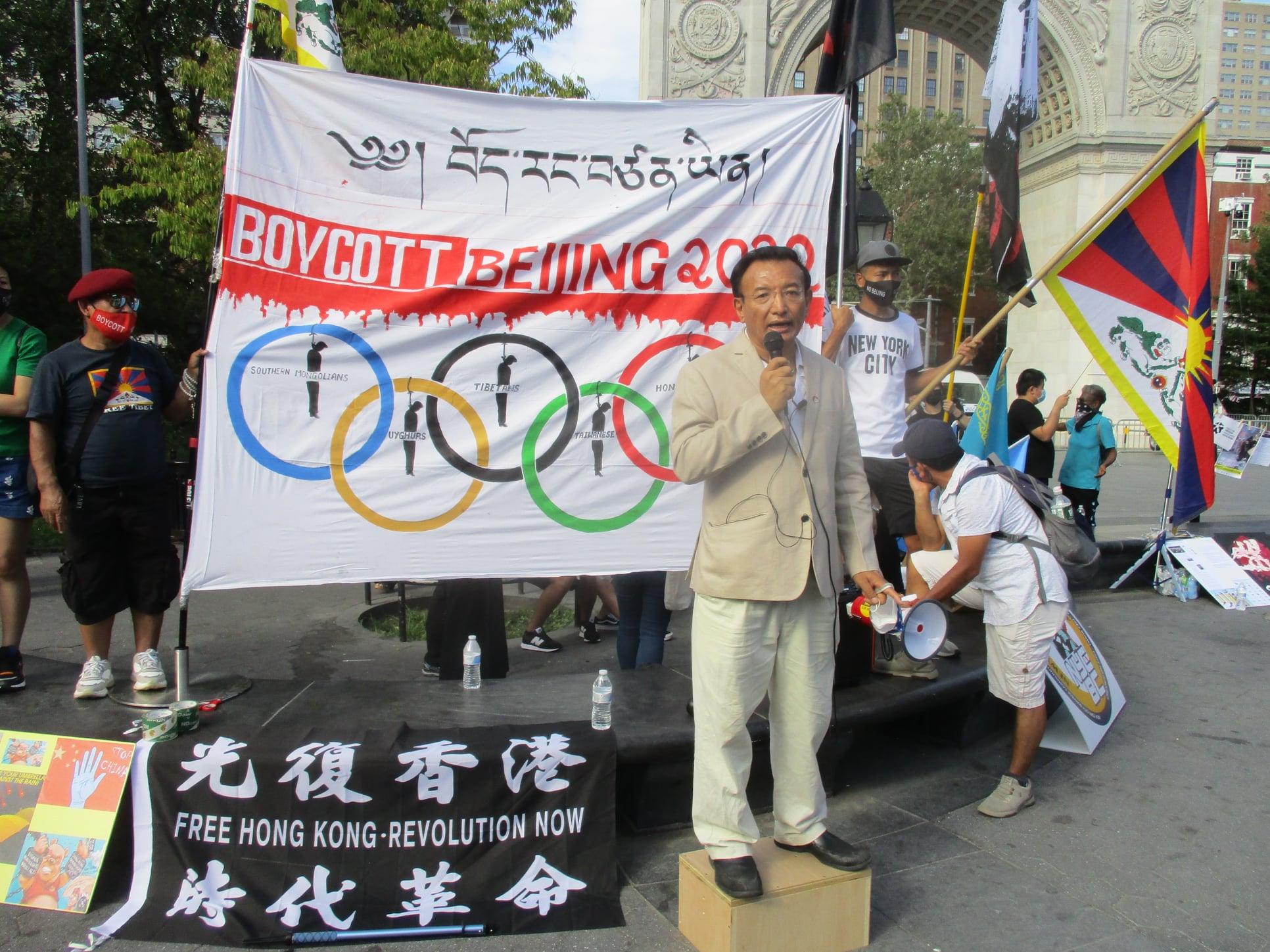 An activist spoke at a rally in Washington Square Park in August, calling for freedom for Hong Kong and a boycott of the Chinese Olympics effort. (Photo by Bill Weinberg)

BY KAY KWON | Although the Olympics ended a month ago, many countries and their athletes are still celebrating their achievements in the Games.

The Philippines won its first gold medal ever. San Marino made history this Olympics, winning three medals, becoming the smallest country to win a medal.

This 2020 Tokyo Olympics was also a historic one for Hong Kong. Hong Kong won more than one medal in the same Olympics for the first time in its history and a second gold medal 25 years after its first one in 1996. To Hong Kong, it is our second gold medal, but it might seem to the world that it is our first gold medal — due to an entirely different flag and a new anthem.

We Hong Kongers have been very proud of our athletes both times, of course. However, when the national anthem was played for each gold medal ceremony, both moments were awkward for most of us but for very different reasons.

Hong Kong had been entering the Olympics as “Hong Kong” since 1952. The first medal we won was in 1996, a gold medal. We were still under British rule — the handover was on July 1, 1997. The flag that was raised at the medal ceremony was the British Hong Kong flag, also named the Dragon and Lion flag, a blue ensign with the coat of arms of Hong Kong on a white disk.

The national anthem that was played was the British one, “God Save the Queen” which most of us had no idea how to sing. We never had to learn it in school. So, although we had no negative feelings toward our colonizer — as the British did treat Hong Kongers kindly and humanely — we could not really sing along when it was played, simply because we did not know how. Yet, the entire city was filled with joy and exuberance at that moment.

When the handover was approaching, schools were making sure that students knew how to sing the Chinese Communist Party’s national anthem. We students were reluctant to learn how to sing it, though, since the idea of communism seemed very foreign and somewhat ludicrous. Yet, all students had to learn it.

The media were playing the national anthem every evening before the nightly news to remind us that the C.C.P. was the one now in charge. However, we who did not grow up under communist China’s rules and schooling, did not feel the same way about it.

Plus, we are supposed to be protected by the Sino-British Joint Declaration, a treaty signed between the U.K. and China that gives Hong Kong 50 years of autonomy. The treaty was supposed to extend to 2047. But Xi Jinping’s China could not wait that long. They violated the treaty in 2014, and more recently attempted to add the Extradition Bill, which would allow Hong Kong to detain persons wanted by the C.C.P. and extradite them to the People’s Republic of China. Hence the start of Hong Kong protests in 2019.

Because of the protests, the C.C.P. added the Hong Kong Nation Security Law, which was a breach of the treaty, that allows the government to arrest any dissidents. Many have been jailed, including cartoonists, editors and passersby who simply were wearing black clothes at the time. Black T-shirts and other black clothing have been adopted by the protesters as their uniform.

In the midst of all the Olympics success celebrations, the political oppression is still ongoing and arrests are still happening right and left. We Hong Kongers remind each other not to forget those who have been seized — including the man that just got arrested for booing the Chinese national anthem during the award ceremony.

Kwon is a native Hong Konger currently living on the Lower East Side.