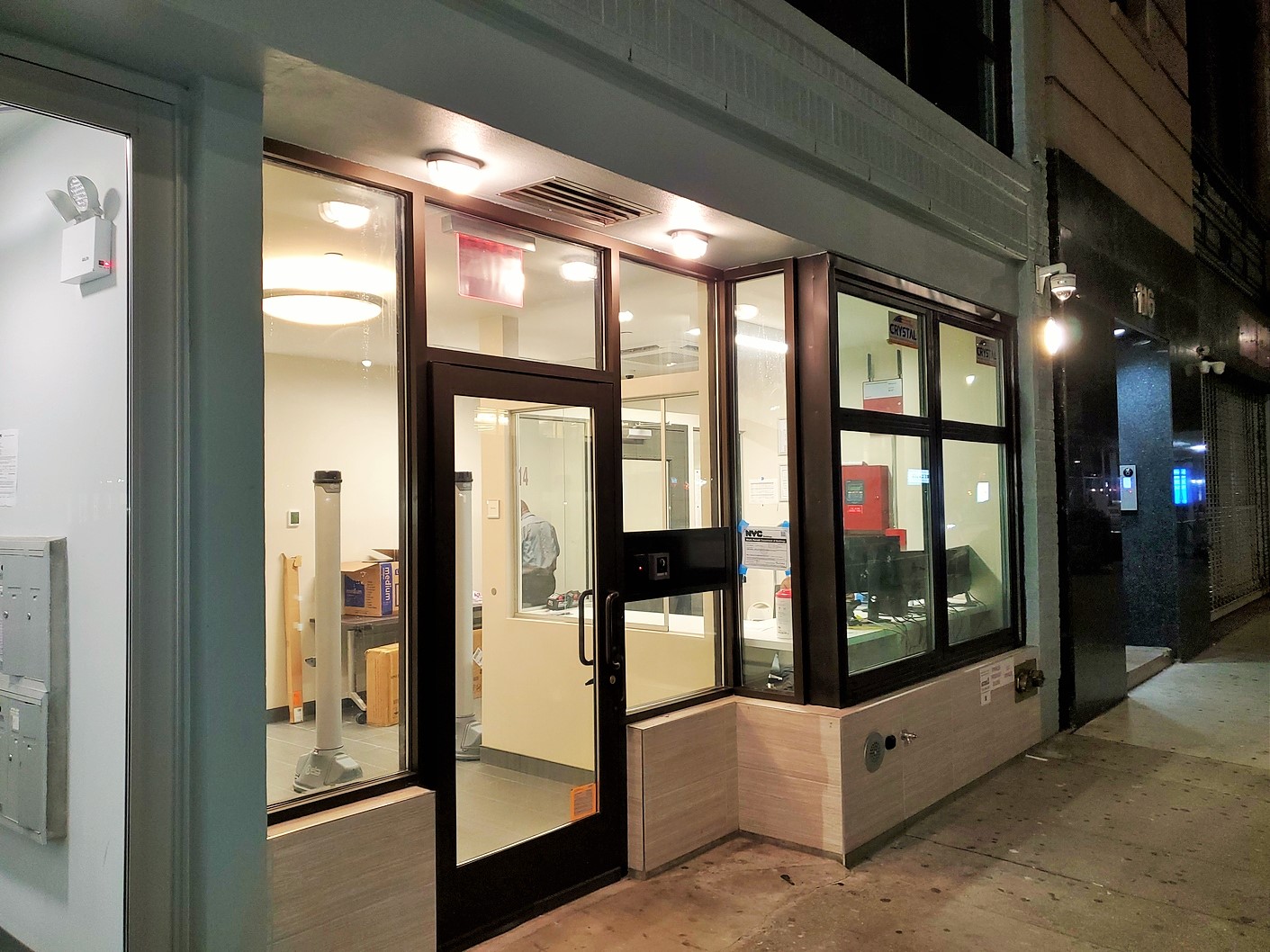 Its operators hope Paul's Place is barely noticed by neighbors. (Photo by The Village Sun)

BY LINCOLN ANDERSON | It’s opening has been seriously delayed, but Paul’s Place, a new Safe Haven-style homeless shelter and drop-in center, appears finally to be up and running on W. 14th Street.

The brown butcher-block paper that long covered the place’s ground-floor windows is now gone, and two men could be seen staffing the center’s front desk one evening last week. After The Village Sun buzzed, one of them answered the door and said that, yes, Paul’s Place would start operating this week.

The lights were also on that night in a second-floor space sporting many chairs that looked like a classroom or meeting room. A sign was also posted on the center’s front door saying that the place is now accepting deliveries.

As The Village Sun first reported back in January, Douglas James, the C.O.O. for this particular Safe Haven’s operators, Center for Urban Community Services, or CUCS, told Community Board 2 that he hoped the homeless site would run so smoothly that it would just blend into the neighborhood and not even be noticed.

The building is just east of the Salvation Army headquarters on W. 14th Street between Sixth and Seventh Avenues.

A co-ed facility, it has a 24-hour homeless drop-in center on its ground floor, sporting 70 recliner chairs that people can sleep in overnight, if they choose. Homeless persons who drop in can also shower, wash their clothes, get a bite to eat, watch TV and socialize in a rec area. There is also an area for cigarette smoking that is not outside in front of the building. The drop-in center can serve up to 75 people at once.

In addition, on the building’s third floor, the place also includes 24 beds for use as transitional shelter for homeless individuals until they hopefully can be placed in permanent supportive housing. The typical stay for these beds will be six months.

Paul’s Place and similar Safe Havens are designed to draw in homeless persons from off the street who have previously been resistant to outreach and services. A similar, though larger, facility planned by Housing Works at Grand Street and Bowery was quashed this May in the face of overwhelming opposition from Chinatown residents. Feeling obligated to reflect the impacted neighborhood’s concerns, Community Board 2 members strongly rejected the plan by a vote of 37 to 6.

The opponents argued that Chinatown already has more than its fair share of homeless shelters, plus that people were terrified due to the spike in anti-Asian violence — including, most disturbingly, the brutal stabbing murder of Christina Yuna Lee in February just two blocks from the proposed shelter site.

That Chinatown facility called for a homeless drop-in center, plus more than 90 stabilization beds, to be sited in the eight-story former Hanbee Best Western Hotel.

In general, the idea behind the Safe Haven-style shelters is to have a “low threshold” for entry, so as to draw in street homeless people who have been resistant to coming indoors. In particular, under Housing Works’ harm-reduction model, homeless people would have been allowed to bring in drugs like heroin and crack and freely use them inside the place.

Charles King, the C.E.O. of Housing Works, put the blame for the Chinatown homeless shelter plan’s collapse squarely on Mayor Adams, telling The Village Sun at the time, “Yes, [it was canceled] by the mayor — to be specific, at the urging of the Hotel Trades Council. What we gathered is that the Trades Council is going to oppose any hotel conversions where they believe the building should be brought back as a commercial hotel and employ their staff.”

As for the outpouring of local opposition to the planned Grand Street shelter, King shrugged, “Had nothing to do with it.”

But community members who fought the plan suspected that King deliberately avoided giving them credit for their role in helping sink the project.

As opposed to a former hotel space, Paul’s Place involved the gut rehab of several floors of a W. 14th Street loft building, including installing an elevator — which, along with the pandemic’s disruption, was partly why the space took so long to complete and to open.

Instead of opposing Paul’s Place, local groups, like the Village Alliance business improvement district, have high hopes for it, feeling the center could play an important role in helping homeless individuals who hang out in Washington Square Park.

Meanwhile, although some residents and local workers have expressed trepidation to The Village Sun about the opening of Paul’s Place at the Greenwich Village location, the project has not received anything near the level of heated opposition that the proposed Housing Works shelter on Grand Street faced. Union Square activist Gail Fox previously said residents were reassured by the fact that Paul’s Place would have a community advisory board.

A P.R. representative for CUCS did not respond to requests for information about the opening of Paul’s Place.