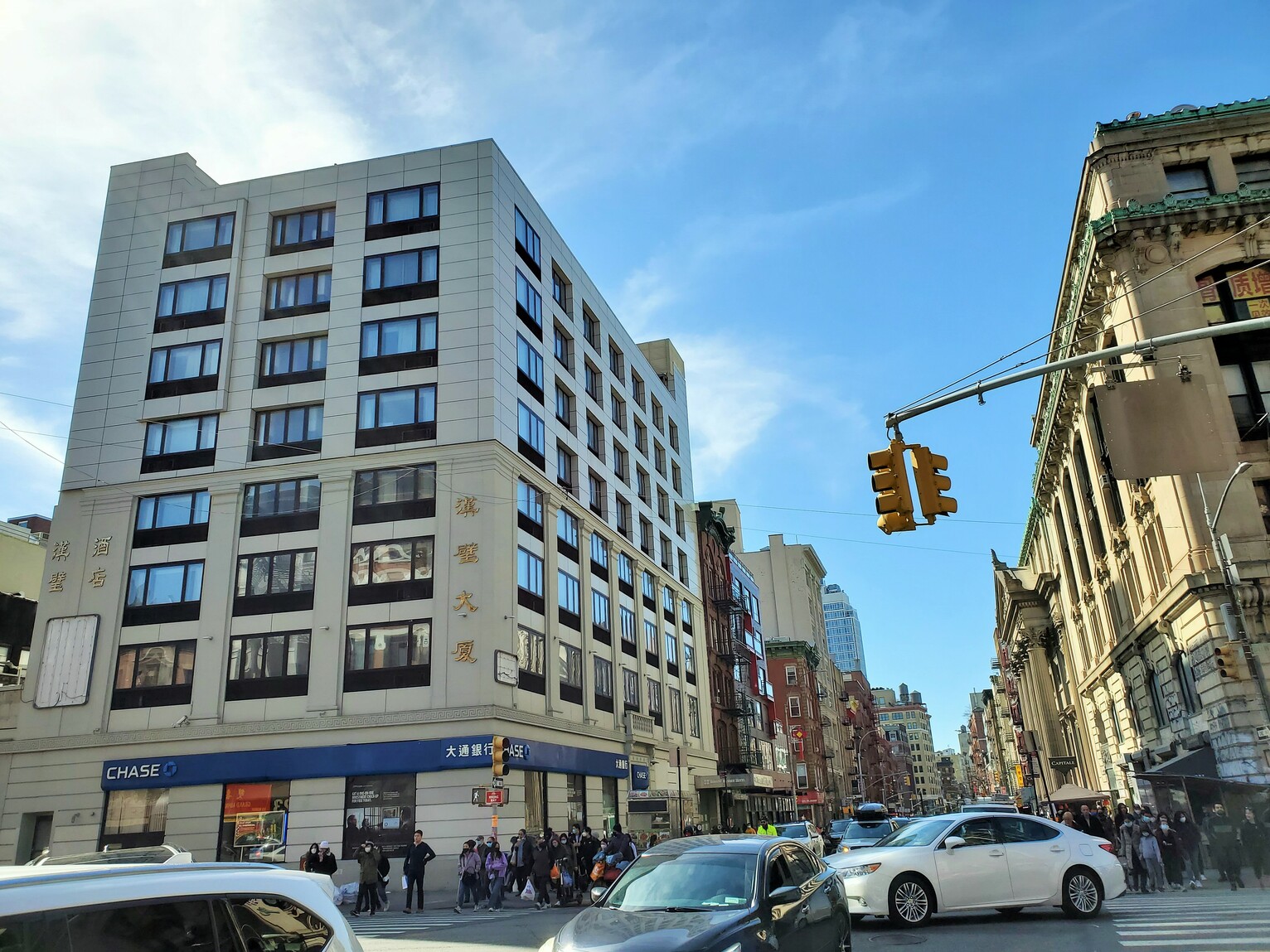 The city has nixed a homeless facility that was slated for the former Best Western hotel at Grand Street and Bowery, at left. (Photo by The Village Sun)

BY LINCOLN ANDERSON | Updated May 2, 9:00 p.m.: In a stunning reversal and a major victory for Chinatown residents and merchants, Mayor Adams has called off plans for a Safe Haven-type homeless facility at 231 Grand St.

But the shelter’s sinking actually wasn’t because of community opposition — but due to opposition from the Hotel Trades Council, at least according to Charles King, the executive director of Housing Works, the organization that would have run the place.

Housing Works had planned to operate a 24/7 harm-reduction-style, homeless drop-in center, as well as more than 90 stabilization beds for homeless people at the former eight-story hotel building at the corner of Bowery and Grand Streets.

“Yes, [it was canceled] by the mayor — to be specific, at the urging of the Hotel Trades Council,” King asserted to The Village Sun. “What we gathered is that the Trades Council is going to oppose any hotel conversions where they believe the building should be brought back as a commercial hotel and employ their staff.”

During the pandemic, the city has used hotels on a temporary basis as a safer housing alternative than its congregate homeless shelters. In the latter, multiple people typically live and sleep together in the same room or space. The city’s use of these commercial “COVID hotels” is now winding down.

On the other hand, the planned Housing Works shelter in Chinatown was going to be permanent; Housing Works even hoped to purchase the building, taking it offline forever as a commercial hotel.

King said the local Chinese press incorrectly reported that the project was canned due to opposition by Chinatown.

“Had nothing to do with it,” he shrugged.

As he recounted it, the end of the contentious plan spiraled down swiftly, starting this past weekend.

King said, in their last-minute negotiations to try to salvage the plan, they tried to see if at least the custodial workers of the Hotel Trades Council could be employed at the planned Housing Works facility. But a deal couldn’t be worked out since Housing Works, though a union shop, is represented by a different union, the Retail, Wholesale and Department Store Union (RWDSU).

“So we could not recognize them,” he said, adding that the Hotel Trades Council turned that plan down anyway. “They weren’t open to any proposition.”

Asked what the next step is for Housing Works, at this point, in terms of securing a new building for a homeless facility, a frustrated King said, “We’re done. What are we gonna do? I think the bottom line is all the mayor’s talk about dealing with homelessness is bulls—. You can quote me on that.

“If he’s going to allow the hotel workers union to veto projects… . This took me a year,” King said, in exasperation. “You think I’m going to go through this — the Fair Share process, dealing with the O.M.B. [budget process] — and then have them come in and say, ‘We don’t support this’ at the last moment?”

The city’s Office of Management and Budget had approved the project, though the O.K.’ing of the contract was pending, King said. Assuming the contract got signed, the building was slated to open on May 23.

The Housing Works honcho sounded completely soured on dealing with the city.

“At least we’re not [going to be] doing any business with the Department of Homeless Services,” he said. “It’s clear that the mayor is not serious. … I don’t think he has any serious commitment to [addressing] homelessness.”

The Village Sun has reached out to the Mayor’s Press Office for comment.

“I think the bottom line is all @NYCMayor’s talk and dealing with homelessness is bulls—. You can quote me on that.” 🔥 🔥 https://t.co/uXDexc41jo

Meanwhile, Susan Lee, the leader of the Alliance for Community Preservation and Betterment, said the news was confirmed by Patrick Kwan from the Mayor’s Office of Community Affairs. According to Lee, what she was told was that it was the pushback from Chinatown — not the hotel workers union — that made the difference.

In addition, according to a source, the city’s Department of Social Services issued the following statement earlier today:

“After reviewing planned shelter sites scheduled to open in Chinatown, we have decided to reevaluate [and relocate] this shelter capacity to an area with fewer services and shelter for those experiencing unsheltered homelessness. Our goal is always to work with communities to understand their needs and equitably distribute shelters across all five boroughs to serve our most vulnerable New Yorkers.”

In related news, last Friday The New York Times reported that another shelter planned in the Chinatown area, at 47 Madison St., had been shelved for the same reasons as stated above. That site is in Community Board 3, whereas the Grand Street location is in C.B. 2.

Regardless of how we won this battle, I am sure we moved the needle a bit. If we don’t give ourselves credit, then no one will. Charles King will not give us credit because he’s trying to discourage community engagement. It’s bad for business for him. It’s a business to him!

Lee, a Tribeca resident and former City Council candidate in District 1, has been a point person in the Chinatown community’s battle against the Housing Works plan. She issued the following statement:

“We applaud Mayor Adams for listening to the concerns of the Chinatown community.

“While the cancellation of the proposed shelter at 231 Grand St. is a move in the right direction, the Alliance for Community Preservation and Betterment remains committed to working with the mayor to address other concerns in the community.

“The former Hanbee Best Western Hotel at 231 Grand St. had over 900 4-star reviews before the pandemic — it brought tourist dollars to the city. With tourism returning to New York City, it is vitally important to keep this hotel open to serve our tourism needs.

“Chinatown never fully recovered from 9/11 and the residual post-9/11 policies, unlike most other communities. When COVID-19 hit in early 2020, Chinatown suffered not only from the lockdown and other protocols but from an explosive rise in hate crimes.

“Our community continues to endure deteriorating neighborhood conditions, worsening public safety and a decline in business and tourism. Residents, small business owners, visitors and tourists alike want to be a part of the revitalization of this vibrant community. Critical improvements in economic recovery and basic quality of life will make Chinatown a desirable destination once again for all New Yorkers and tourists, and contribute to the city’s prosperity.

“The Alliance wants to thank all its volunteers, members, supporters and, most importantly, its committee members who have logged countless volunteer hours and worked tirelessly since February. Thank you also to Manhattan’s Community Board 2 for their dedication and support in service of our shared community.”

The plan for 231 Grand St. was put into place by Adams’s predecessor, Bill de Blasio.

Over the past two months, hundreds of people representing Chinatown had turned out at C.B. 2 meetings to voice their opposition to the Grand Street shelter, arguing that the area — including Sara D. Roosevelt Park — is already oversaturated with facilities for the homeless. Problem-plagued S.D.R. Park is known as a hotspot for K2, synthetic marijuana, which is known for causing erratic behavior in its users.

In February, Christina Yuna Lee was brutally stabbed to death inside her Chrystie Street apartment a block and a half away from the proposed shelter site by a homeless man who had snuck into her building behind her.

Heeding the community’s outcry, Board 2 recently voted, in an advisory resolution, to oppose the Housing Works plan for 231 Grand St. by a vote of 37 to 6. King said the community board’s review of the plan was part of the city’s Fair Share process, which determines that city facilities are evenly spread throughout the city. Outraged opponnets had railed that the area already has six homeless shelters, with four more planned, including the Grand Street site.

However, Susanna Aaron, the chairperson of the board’s Human Services Committee, had strongly lobbied for C.B. 2 not to issue a resolution on the issue — and, if there were to be a resolution, at least for it not to oppose the shelter. She, like Housing Works C.E.O. King, argued that the shelter would not worsen but would instead reduce quality-of-life problems in the surrounding neighborhood by moving them indoors into the Grand Street building, where people could receive “wraparound services.”

Under the harm-reduction model, people would have been allowed to bring drugs into the facility and freely shoot up. The idea behind the Safe Haven-style shelters is to have a “low threshold” for entry in order to draw in street homeless people resistant to coming indoors.

Aaron also pointed out that two of the six existing homeless sites are not permanent and are scheduled to shut down relatively soon.

But Chinatown opponents argued that half of the Grand Street site’s users would be drawn from outside the immediate area, including from outreach in Washington Square Park and the Manhattan subway system. And they said a city-contracted non-congregate COVID hotel that was there previously during the pandemic had noticeably worsened the area’s quality of life.

In the end, C.B. 2 members overwhelmingly chose to side with the Chinatown community against the plan.

“I would have preferred that the shelter were halted because a Fair Share analysis determined that the area was, in fact, saturated,” Aaron told The Village Sun on Monday after the latest news broke. “Instead, the Fair Share analysis was not even executed and it seems that this decision was the result of political wrangling by a group that was owed favors from the mayor. I’m disappointed, not by the outcome, but by the process — or the lack thereof. It is not an example of good governance.”

Meanwhile, King added that the canceling of the 231 Grand St. plan means Housing Works will now have to lay off 80 workers. These employees were working at a COVID “quarantine hotel” in Hell’s Kitchen and a COVID “isolation hotel” in Long Island City that the organiztion has been running on a temporary basis but which the city is now winding down. Housing Works had intended to shift those workers to the Chinatown homeless facility.