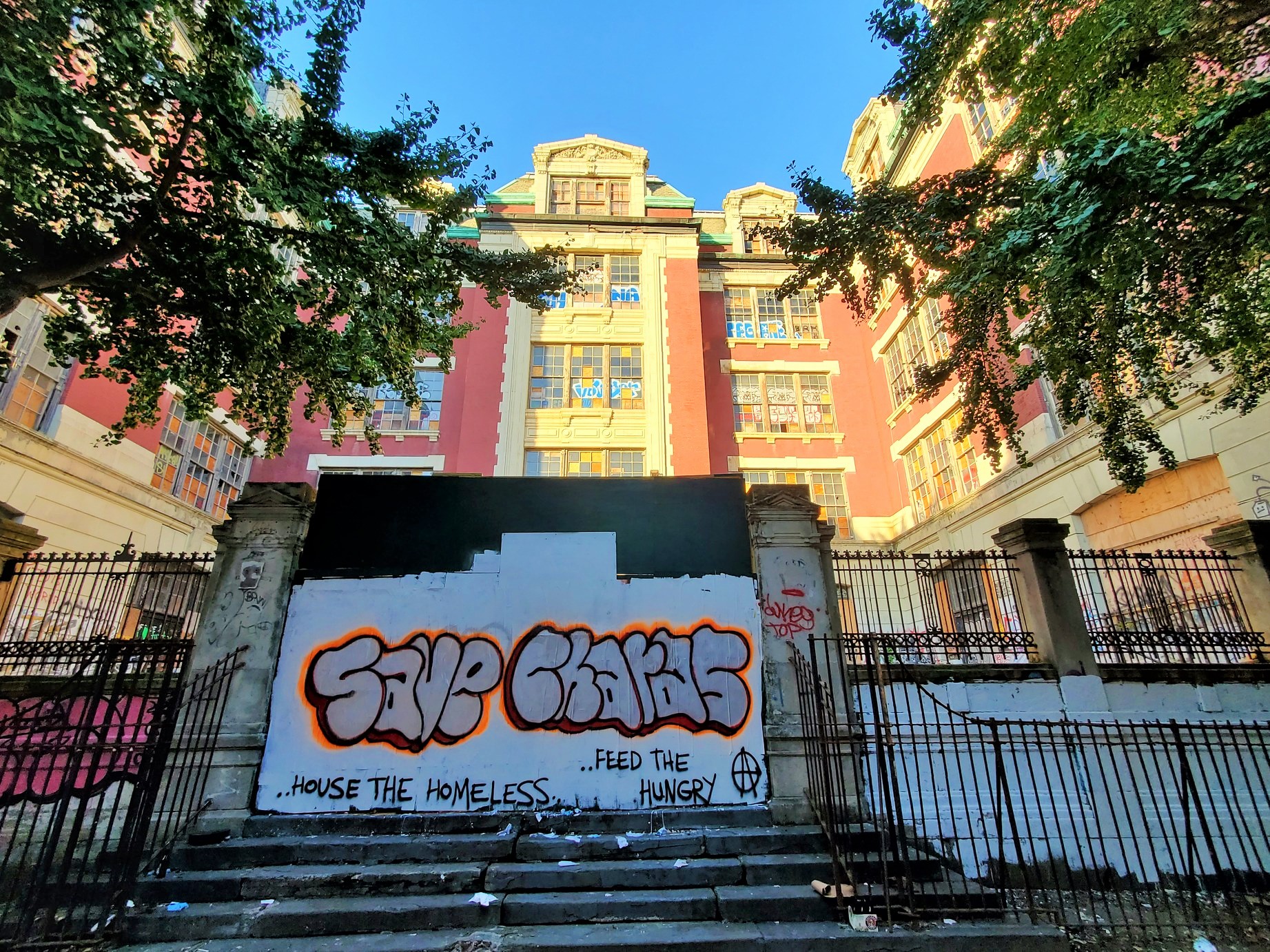 The Guardians of Loisaida painted a "Save CHARAS" mural on the fence on the old school building's E. Ninth Street side in October. (Photo by The Village Sun)

Holiday hopes for the return of old P.S. 64

Things will kick off with the party. Hosted by Guardians of Loisaiada, it’s being held this afternoon, Friday, in front of the old school building, formerly home to CHARAS/El Bohio, on E. Ninth Street just east of Avenue B.

Around 5 p.m., there will be free pizza from Two Boots. (The Village Sun actually helped hook up one of the Guardians’ leaders, Kenny Toglia, with Two Boots, which offered them a good deal. Chris Flash, publisher of The SHADOW, will reportedly be picking up the pies, courtesy of $50 PayPal’ed from John Penley, a “remote” Guardian who lives in Las Vegas.)

Word had it that “pot godfather” Dana Beal, yet another Guardian, would be handing out free weed. However, Beal, who recently relocated from a run-down Midtown synagogue to somewhere Uptown, told The Village Sun, “Kenny’s giving it away.”

“I want to see us open up the Bob Sisco Ibogaine Clinic in CHARAS,” Beal reiterated.

Due to the rain, the Guardians will have a tent set up at the location.

Meanwhile, there won’t be free pot — but there will be free pizza — when SOCCC-64 (Save Our CHARAS Community Center / old P.S. 64) and local politicians rally outside the vacant building at noon on Saturday.

(Two Boots did reach out to the event’s organizers to see if they wanted any ’za — but initially no one got back to them. Phil Hartman of Two Boots said it could have just been “a communication glitch”… . Later on Friday, though, in an update, he reported, “There will be pizza at the event tomorrow, donated by Two Boots, longtime supporter of CHARAS, Inc.!”)

The rally will mark the 21st anniversary of the eviction of CHARAS — a Puerto Rican-led community and cultural organization — from the building. People will ask the mayor to make their “holiday wish come true” and return the building to the community.

There is a rumor that the Guardians, separately, may also do a “banner drop” during Saturday’s rally. …

The old school — whose alumni include Yip Harburg, the lyricist of “Over the Rainbow” — was purchased by developer Gregg Singer in 1998 for $3.2 million at an auction of city properties under Mayor Giuliani. CHARAS’s co-directors, Chino Garcia and the late Armando Perez, were political foes of local Councilmember Antonio Pagan, who was a Giuliani ally. With a force of hundreds of police in riot helmets and wielding batons massed on Ninth Street outside, CHARAS was evicted from the place at the end of 2001.

The building has sat empty since then as all of Singer’s development schemes have been frustrated by opposition from the community, local politicians and City Hall. He is currently suing the city, politicians and scores of activists for “tortious” — as in, “wrongful” — interference.

When he ran for reelection, Mayor de Blasio pledged that the city would try to reaquire the high-profile East Village property. But nothing ever came of it, with de Blasio and Singer each blaming the other for why things went nowhere.