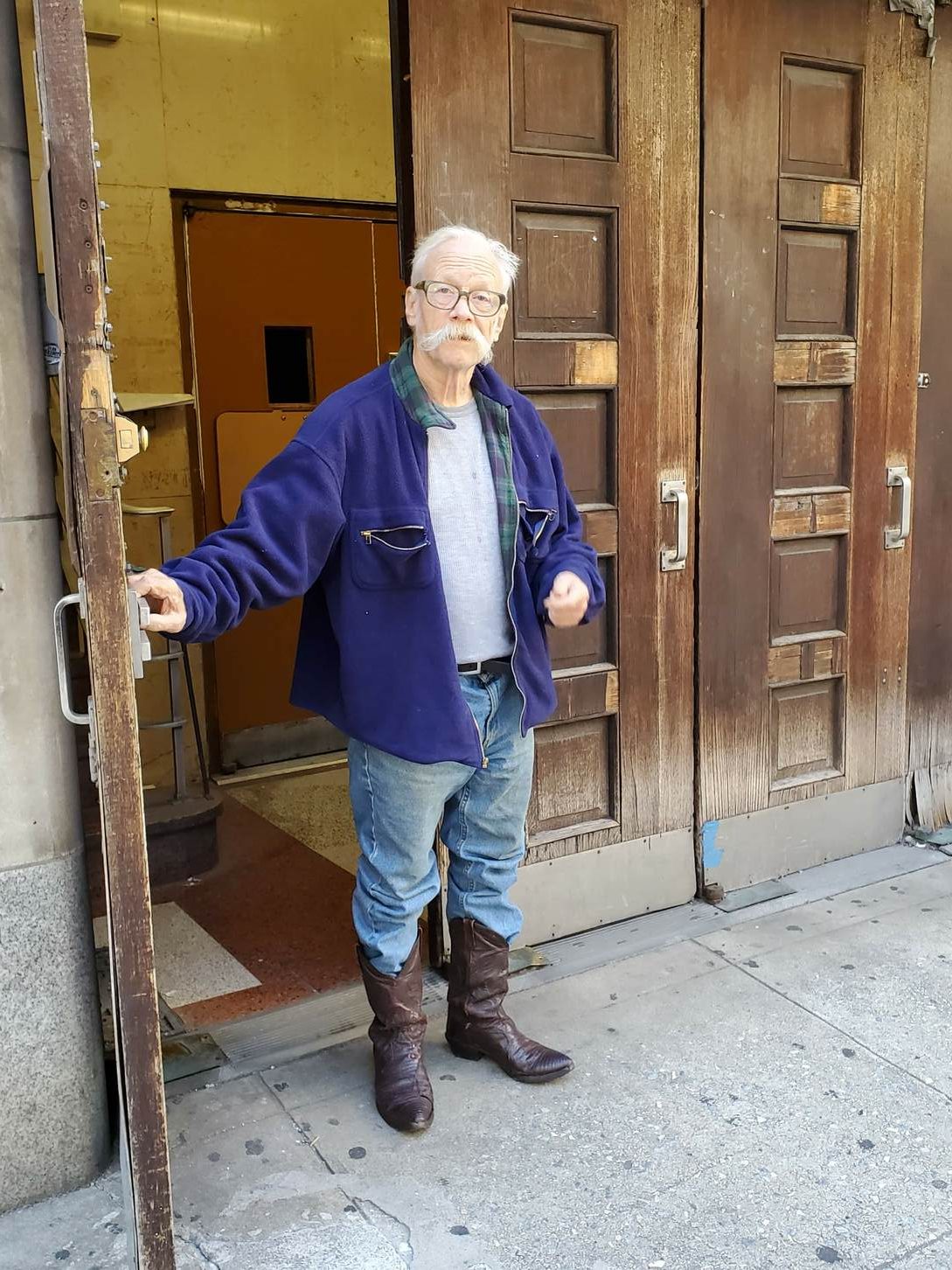 Dana Beal has lived in the Millinery Center Synagogue for the past eight years. (Photo by The Village Sun)

BY LINCOLN ANDERSON | Like a joint that’s burning down to its end, Dana Beal’s time at his current makeshift residence is running out.

Since 2014, Beal — one of the “godfathers” of the marijuana legalization movement — has lived on the top floor of the run-down Millinery Center Synagogue, on Sixth Avenue between 38th and 39th Streets, in Midtown.

A leading member of the second-wave Yippies, Beal, 75, previously lived at 9 Bleecker St. a.k.a. Yippie Headquarters. But the Yippies lost the building after failing to meet their mortgage payments and it was taken over by Overthrow, a hipster boxing gym.

In between his time on Bleecker Street in Noho and the Garment District house of worship, Beal spent a few years in jail in the Midwest. He was busted driving a load of weed cross-country from California back to New York City. In his defense, Beal claimed much of the marijuana was medical. While behind bars, he had a heart attack and, as he tells it, actually was dead for several minutes.

Beal has a roommate, Evan Camp, whom he described as his secretary. Any new place must have space for two people.

Beal and Camp said the synagogue’s leadership has been trying to evict them for the past five years — though there was “a long gap” of inaction during COVID — and that the effort has now resumed in earnest. They started getting formal eviction notices a couple of months ago. In response to the eviction threat, they haven’t paid rent for the past three years.

In 2017, Rabbi Avrohom Dov Kahn was elected the synagogue’s rabbi. The place still holds a daily service — or as Camp said, “They try to.”

“I haven’t seen the rabbi for a couple of months,” Beal said, adding he has his “suspicions” about what may be afoot.

He said he did notice some real estate-looking types recently checking out the place. There are currently no permits on file with D.O.B., however, for any demolition or construction plans. But the spot, less than two blocks away from Bryant Park, is clearly highly valuable.

Beal is looking to move out of the synagogue by Thanksgiving.

The building, constructed in 1948, is narrow, just 19 feet wide, enclosing nearly 3,400 square feet. During its heyday — when fashionable women’s hats were a must-have and the industry was booming — the synagogue was so well attended there were several shifts of daily services.

As for violations on record, the synagogue has been cited by the Department of Buildings nearly every year since 1993 for “failure to file an annual boiler inspection report.”

When The Village Sun recently dropped by, Beal took a seat at his computer desk, which is cluttered with stuff. The desk’s corner is ringed with a strip of frayed yellow-and-black hazard tape, some of which had come loose and hung dangling down. Beal sleeps on a mattress on the floor. His suit hangs on a nail on the wall. Positioned beneath a 1-foot-wide hole in the plaster ceiling was a large metal pot. There was an inch of water in it.

Beal pulled up articles on the laptop computer about brain neural connections and the salutary effects of certain molecules on them. As is his wont, he spoke about what has become his passion: making ibogaine — which is dervied from an African plant — commercially available. In the past, he mainly extolled the drug’s alleged ability to block addiction to cocaine, opiates and methamphetamine. His current focus, though, is on using the substance to combat the debilitating effects of Parkinson’s disease and strokes.

“I’m trying to make ibogaine in a pill form and sell it where it’s legal, by FedEx,” he explained.

He’s currently trying to get the pills — which he said would be CBD/ibogaine — manufactured in India, but if that doesn’t work out, will try Ghana. Ibogaine is not a legal drug in the U.S. Medical professionals raise concerns about serious side effects, including impaired balance, among others. Beal just shrugged, saying that wears off.

Among his more recent activism, Beal has held several giveaways of free weed in Union Square and other locations for people who show proof of COVID vaccination. Beal said the “Joints for Jabs” events were to thank former Governor Cuomo for legalzing pot in New York. He’s also been holding rallies in both Washington, D.C., and New York calling for Donald Trump to be arrested.

Longtime New York City pot dealers are currently lobbying for a “legacy license” to sell amid the newly legalized climate.

“I want a legacy license for ibogaine,” Beal declared, then added, after a pause, “What I think I should get are reparations.”

If you know of a place where Dana Beal can move, he can be reached at idb1947@gmail.com.