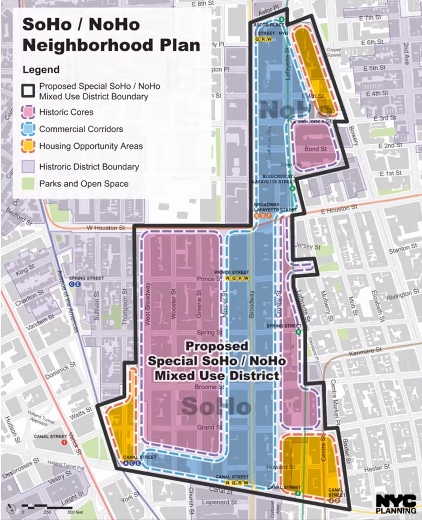 A map showing the city's plan to rezone — and upzone — Soho and Noho. (Courtesy NYC Dept. of City Planning)

BY THE VILLAGE SUN | A Community Board 2 committee sought feedback on the city’s Soho/Noho upzoning plan at a public hearing last Tuesday. But locals instead stressed they don’t want any upzoning at all, with some saying they strongly preferred a community alternative rezoning plan without any upzoning.

Some residents further said what’s really needed is a “building by building” assessment of the two Downtown enclaves. They charged that advocates of the city’s plan are unfairly painting the area with a broad brush to make everyone living there seem rich, when it’s simply not true.

More than 155 people attended the virtual public hearing held by the C.B. 2 Land Use Committee. The hearing concerned the environmental scope review for the city’s rezoning plan, though not the proposed rezoning itself. If the plan moves ahead, there will be more public hearings on it next year.

The city plan calls for Mandatory Inclusionary Housing, which would require a percentage of all new units to be affordable. But the scheme’s critics say the benefits of this new affordable housing would be offset by the far greater amount of luxury housing the plan would flood the area with.

David Lawrence, a photographer and longtime Soho denizen, said the residents in his Grand St. building are all artists, and that 30 to 40 percent of them are black or Asian. About half of the building’s units rent for under $2,000 a month, which qualifies as affordable housing, he added.

“I really resent people saying Soho is rich and white,” he said.

Lawrence lives in a corner of Soho where the city’s plan calls for upzoning to allow 10-to-12-story buildings. If a massive building were constructed there, he said, it would block his light, affecting his very livelihood.

“I would probably have to move,” he stated. “I could not work here.”

Not only that, but an upzoning would only worsen existing traffic problems, he warned.

“Congestion in Soho is untenable,” he said. “I see very little in this plan about traffic.”

Similarly, Micki McGee, of South Village Neighbors, said that 30 percent of the apartments in her area of western Soho are rent-stabilized.

“Many, many rent-stabilized tenants would be threatened with displacement,” by the city’s plan, she said. “Many elderly residents, too.”

However, Douglas Hanau, who supports the city’s rezoning, noted that rent-regulated apartments, even if they are renting for $2,000 or under, “are not income restricted. The new affordable housing would be.”

The Alternative Community Rezoning plan, meanwhile, proposes to create more affordable housing than the city’s plan, plus with deeper affordability, though without any upzoning.

Paul Tschinkel said he moved into Soho when it was “dilapidated,” which was perfect for artists.

“I see developers wanting to come in and piggyback on the artists’ back,” he said. “They should go to Williamsburg and Bushwick. I think it’s outrageous to upzone this and make it a neighborhood no one wants to go to.”

Similarly, Joan Melnick, a 50-year Noho resident, said, “We have watched the neighborhood change from junkies in the hallways to a rather upscale neighborhood over the last 10 years.”

Lora Tenenbaum cited her block as an example of how only a few wealthy residents can drastically skew statistics. While many of its units are rent-regulated, with a mix of Asian and white residents, two apartments were bought by super-wealthy individuals, thus ranking the block among the wealthiest in the city, she said.

“The fact is one of those high-end apartments is occupied by a person of color,” she noted, adding, “This is why we need to do a building-by-building survey [of income levels].”

But John Sanchez, the district manager of the Bronx’s Community Board 6 and a candidate for City Council, spoke in support of the city’s plan. He said many of the Downtown area’s hospital workers and supermarket workers commute from places like his district and should have the ability to live closer to work.

“Essential workers should be able to live anywhere,” he said.

Brandon Zwagerman, director of planning and community engagement for the Broadway Soho Initiative — Soho’s business improvement district — spoke in favor of the upzoning plan. The affordable housing it would bring, he said, would make for a “more equitable recovery from COVID.”

Several speakers noted that Soho does not even have any schools, yet the city’s plan would boost the area’s population. Rosalie Hronsky, who said she moved there 30 years ago because it was affordable for artists, said it has never really been a neighborhood for kids.

She blasted the city’s rezoning plan as “naive and delusionary.”

“I feel that I’ve been at a Trump rally and need to take a shower,” she said, in exasperation. “The fact is this is a market-driven plan.”

“I think this is just another developers’ dream,” echoed Anita Isola. “This will devastate a historic area and will displace many people who are living in affordable housing now.”

Another longtime resident complained that the development plan is being rushed — “blowtorched and bulldozed,” as she put it — to ram it through to approval. But Mayor de Blasio, who is facing term limits, has said he thinks there’s plenty of time to get the rezoning plan through the city’s ULURP review process next year, his final year in office.