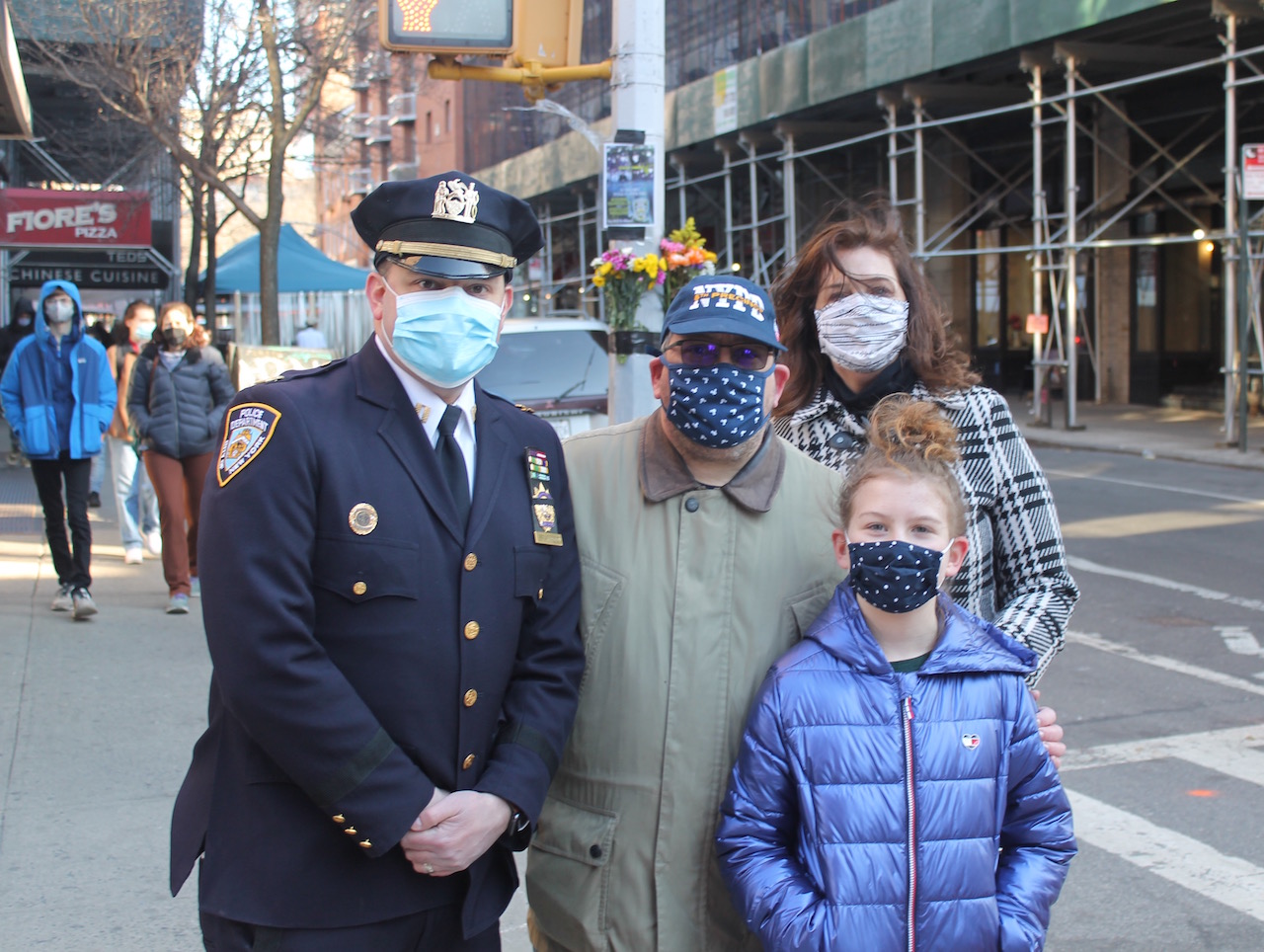 From left, Captain Stephen Spataro, Chris and Lorri Latman and their daughter, Sophia, at the ceremony for Nicholas Pekearo and Eugene Marshalik. (Photo by The Village Sun)

BY THE VILLAGE SUN | Auxiliary and Sixth Precinct officers gathered at Bleecker and Sullivan Sts. on Sunday afternoon with family members of two auxiliary cops who 14 years ago paid the ultimate price in the line of duty.

On the night of March 14, 2007, Nicholas Pekearo, 28, and Yevgeniy “Eugene” Marshalik, 19, were slain by an enraged gunman who had just fatally blasted a pizza restaurant worker 15 times in the back on W. Houston St.

They confronted the killer, getting him to drop a bag containing a gun, 100 rounds of ammunition and knives, before he spun and fatally shot them both.

Sunday’s memorial ceremony was low key. Marshalik’s parents attended, as did Pekearo’s brother and his family. There were two speakers, Captain Stephen Spataro, the Sixth Precinct’s commanding officer, and Inspector Emmanuel Gonzalez, the head of the city’s Auxiliary Section.

Speaking to The Village Sun, Spataro said of the two heroic auxiliaries, “They’re an amazing inspiration, Nicholas and Eugene. They volunteered their time. They put on the uniform, knowing the risks, no compensation.

“Their sacrifice is a legacy they leave behind. They’re an inspiration to us.”

Latman said, “When they have this service, it makes it feel like it was six months ago. It’s always very moving.

“He really enjoyed helping his community,” he said of his brother.

Although he and Nicholas grew up on Morton St., Latman now lives on Staten Island with their mother. They had different fathers.

The shooter on that fateful night 14 years ago, David Garvin, 42, a former Marine and wannabe filmmaker from Missouri, was living with a woman on Horatio St. at the time.

Pekearo, a writer living in the Village, and Marshalik, a New York University sophomore, were on foot patrol together. Like all volunteer auxiliary officers, they were unarmed when they confronted the fleeing shooter, getting him to drop the bag with a gun and bullets.

But, using another gun, the maniac turned back and shot Marshalik once in the head and Pekearo, who sought cover behind a car, six times, killing them both.

Garvin then fled into the nearby Village Tannery leather on Bleecker St. shop to reload. When he reemerged back onto the street, he was cut down in a hail of bullets from police officers.

The tragic double killing of Pekearo and Marshalik led the Police Department to buy bulletproof vests for auxiliary officers. Previously, auxiliaries had to pay for their own protective vests.