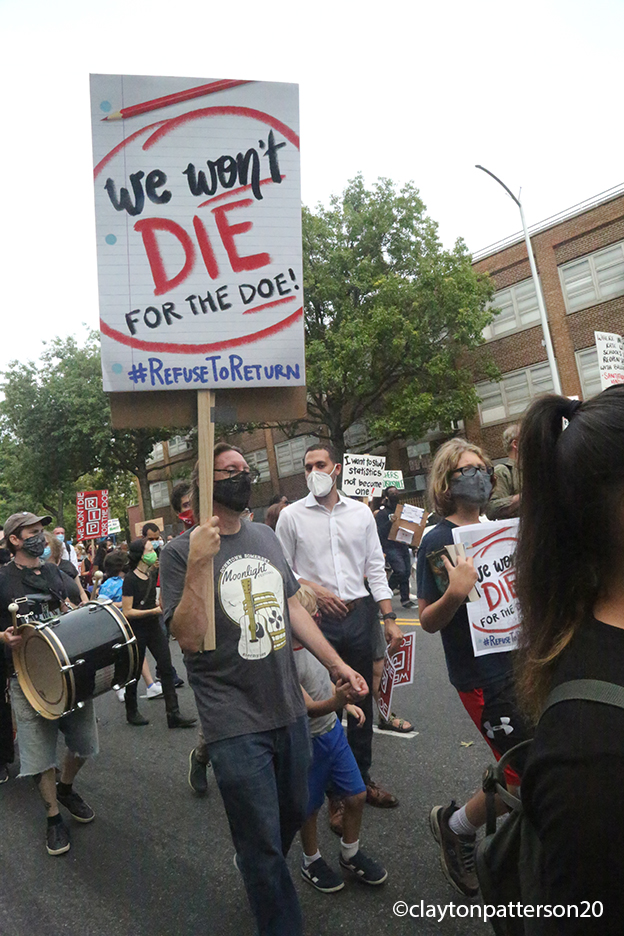 The marchers made their way along Essex St. on the way down to Columbus Park. As the man's sign indicated, the defiant protesters are not about to let the Department of Education (D.O.E.) pressure them to send their children to school before they feel it's safe. (Photo by Clayton Patterson)

On Thursday, Cynthia Nixon, a battery of politicians and School District 1 parents, students and teachers, angrily gave the mayor an “F” for how he is handling — or rather mishandling — reopening the schools during the pandemic.

Public Advocate Jumaane Williams said he wanted to grade de Blasio even lower than that.

“I wish we could give you an ‘F minus’ or a ‘G’ because it’s that bad,” he declared. “You’re saying that everyone in that [school] building, teachers and staff, is expendable.

“The schools are not ready to be open,” Williams fumed. “Teachers need to strike. Parents need to keep the kids home. It’s so simple. All we said is simply, ‘Wait!’

“Put money into remote learning and then you phase in the system,” he urged the mayor. “And then you assess what’s going on.”

Williams said he and others had created a reopening plan months ago, but now the mayor, at the last minute, is scrambling to find a solution that works. School inspections only started in late summer. The public advocated begged de Blasio to let more people in on his process.

“We have a plan!” he said. “You have never had the right people in the room.”

In what was dubbed a “March for Our Schools and Our Lives,” the protesters wended their way down from the East Village and Lower East Side to Columbus Park, where they rallied on an artificial-turf-covered soccer field. Power Malu was the event’s emcee.

The original plan had been to gather in nearby Foley Square, but black-clad protesters were assembling there to demonstrate against accusations that ICE detainees in Georgia underwent hysterectomies without their consent.

School District 1 includes the East Village and most of the Lower East Side.

Just that day, the mayor — already for the second time — had pushed back the reopening of schools for most students. Instead of starting this Monday, K-through-fifth-grade students will begin in-person classes on Sept. 29, and middle school and high school students will start Oct. 1. But 3-K, pre-K and District 75 students (who have autism spectrum disorders, sensory impairments and other challenges) will still start Monday.

Gia, a teacher at the Earth School, warned against opening the schools now. She and other speakers noted that the city’s public school students are majority black and brown.

“We know if we open up the buildings we’re going to get a second wave in two weeks,” she said. “This is a Black Lives issue!”

The Lower East Side already has been hit particularly hard by COVID, and families don’t want to lose any more loved ones, speakers noted.

Nixon, similarly, said that opening up the schools for the system’s 1.1 million students — many of whom use the subways — would be like a “super-spreader on steroids.”

“Look how how careful they were about opening restaurants and nail salons and gyms,” Nixon said. “We can’t open our schools in a haphazard way.”

She and others said there should be no lack of funding to make the schools safe — because the city’s billionaires should be forced to provide it. In fact, one of the rally’s hashtags was #TaxTheRich.

The former gubernatorial candidate slammed the city’s 118 billionaires, claiming they have racked up an additional $77 billion during the pandemic alone. Meanwhile, just that morning, New Jersey lawmakers had boosted the tax on billionaires, she added.

Hayden, a seventh grader at East Side Academy, spoke for many when he said, “Why are we opening schools when restaurants don’t even have indoor access yet? I really, really miss indoor school, but learning on laptops and phones is the best thing right now.”

“This is a failure,” Assemblymember Yuh-Line Niou proclaimed of the reopening fiasco.

Meanwhile, she blasted the city’s recent austerity budget and cuts to statewide education by Governor Cuomo.

“We should not be cutting healthcare and essential workers during a global pandemic,” Niou said.

“We need to tax the rich,” she stressed. “F.D.R. has said it most eloquently: ‘This is America — those who can afford it should be taxed.'”

State Senator Brad Hoylman said de Blasio is literally causing “whiplash” for parents, students and teachers with all the abrupt changes he has been making about reopening the schools over the last month.

Like other speakers, Hoylman hammered the super-wealthy, saying they must pay more. He made reference to his pied-a-terre tax bill, noting that Ken Griffin, a Chicago-based billionaire, bought an apartment in New York City for more than $200 million but pays “the same effective tax rate as a single-family home owner in Queens.”

“And we need to change that,” Hoylman stressed.

“You can only die one time,” she said. “You don’t come back. What we do know is that masks work, social distancing works. But we don’t know how ventilation works in a 100-year-old building.”

Similarly, City Comptroller Scott Stringer, who has two young children in the school system, said, “The stakes for our children have never been higher.

Instead of taxing billionaires, though, Stringer focused on what he called wasteful funding in the Department of Education that could be put to better use in the schools.

“When the mayor says there isn’t enough money,” he said, “I can tell you there is $600 million in outside consultants and bureaucratic waste that can be used to create a safe system for our kids. The money is there.

“We need a plan,” he declared. “We have no tolerance for this incompetence.”

The rally was organized by four local parents, Naomi Pena, president of Community Education Council District 1; Lilah Mejia, a C.E.C. 1 member and a leader of the activist group Why Not Care; Olympia Kazi and Christine Marinoni.

Speaking after the rally, Kazi noted that while the city’s plan is for students to stay in self-contained “pods,” teachers will move between the pods, potentially spreading infection. To address this problem, thousands of more teachers are needed, she said.

Also speaking afterward, Pena detailed the myriad problems right now with reopening. For starters, she said, there are schools with serious ventilation problems, where windows are sealed shut or can only open a few inches; meanwhile, some schools, like Murry Bergtraum High School, by the Brooklyn Bridge, actually have no windows at all, so are totally dependent on a well-functioning ventilation system to ensure that the occupants would be safe.

And there are issues with PPE, Pena noted.

“The products sent over do not work,” she said. “The thermometers say 92 degrees — [meaning] you’re dead. The instructions are in Chinese. The hand wipes don’t have enough alcohol content.”

On top of that, the C.E.C. leader added, “thermometers are pointless.” In other words, taking everyone’s temperature when they enter a school building does not guarantee protection because people could be infected yet asymptomatic.

Echoing the teacher who spoke earlier at the rally, she said, “If we open, we will for sure have a second wave.”

Mejia said the city has to start being more upfront.

“We must stop gaslighting our families and tell them the honest truth,” she said, “so they can make better informed decisions for their families.”