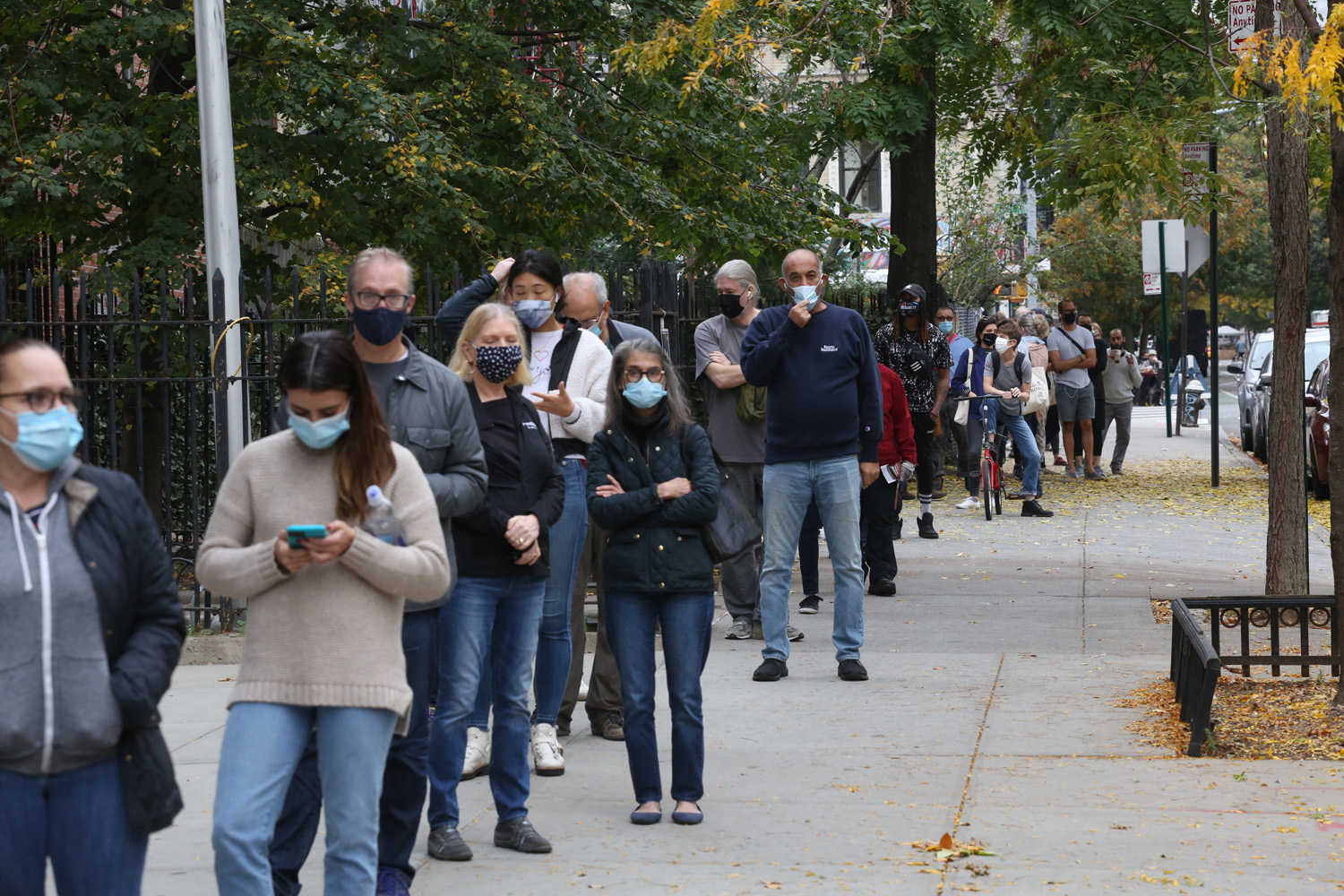 Voters on line outside the Campos Plaza Community Center on E. 13th St. on Sat., Oct. 24. (Photo by © Jefferson Siegel)

BY JEFFERSON SIEGEL AND LINCOLN ANDERSON | This past weekend the anxiety and frustration of countless New Yorkers seemed to evaporate as they lined up throughout the city for the first round of voting in the presidential election. For the first time in New York State, early voting for president saw thousands patiently wait hours at 88 polling sites in the city to cast a ballot.

Saturday morning at the Hunter College Brookdale Dorm, on E. 25th St., a line of voters stretched to First Ave. and then up several blocks, doubling back on itself in several places. Some people sat in lawn chairs while others unfolded newspapers and magazines to pass the time.

Many in line voiced relief, rather than resentment, at the up to four-hour wait. Once the voters were inside the poll site, Board of Elections workers directed them to a row of check-in desks separated by large plexiglass barriers, and then to booths to mark their ballots, before finally inserting the ballots into a counting machine.

A similar scene played out at the Campos Plaza Community Center, on E. 13th St. in the East Village, where long lines of masked voters waited patiently.

Also on Saturday, Village activist Sharon Woolums, who was working at the St. Anthony’s Church poll site, at Sullivan and Houston Sts., reported that the line of voters was eight blocks long and there was a four-hour wait.

“Most were in a good mood and thought it was worth the wait” to vote in the hotly contested election, she said. “They were actually happy to see such a great turnout.”

Sunday saw similar lines, despite colder weather and gray skies. As the day wore on, waits shortened. One voter who arrived at the Hunter College location at 3:30 p.m., half an hour before the polls closed, was done 45 minutes after first lining up.

In a tweet, John Blasco, an East Village district leader, reported a heavy turnout and also an upbeat mood among voters despite the long lines.

One thing that really stood out to me today — yes the wait time was long, but NOT ONE person I saw complained. Everyone smiled, and voters thanked @BOENYC staff & poll workers for their hard work. Line Managers & myself were greeted with “thank you”.

Arthur Schwartz, the Village Democratic district leader, however, said early voting could have been handled better.

“I went down to see what was  going on at St Anthony’s on Houston and Sullivan,” he said. “The line was so so long. I am disappointed that the state did not fund the Board of Elections to have a far greater number of early voting locations. People had to wait far too long.

“At least for weekend voting, there should have been more than one site in an Assembly district, which is about what we had,” he noted. “New York was the 37th state to have early voting, and the process needs a lot of work. I am surprised that there hasn’t been more noise about this from elected officials.

In fact, there was one confusing glitch, of sorts, if it could be called that. Basically, voters in a couple of election districts in the Village — including around Washington Square Village — were told their early voting place was Madison Square Garden.

Sugar Barry, a longtime member of the Washington Square Association, was among those frustrated to learn in early October that her early voting site was the Midtown sports arena.

“Which is annoying because Skirball will be open — just not for our address,” she said at that time, referring to New York University’s Skirball Center. The N.Y.U. theater is one of 16 designated sites in Manhattan for early voting.

“I had requested a mail-in ballot, but with all the fuss about postal service I would rather drop it off,” Barry said. “The good news is that you can drop your ballot at any early voting site. So…I will walk over to Skirball and drop it off there.  Much easier.”

District Leader Schwartz said he, too, had heard complaints about the M.S.G. snafu.

“I just got an e-mail from a voter about a second problem,” he said on Sunday night. “Some folks from the Village were told they had to vote at Madison Square Garden after they waited their hour on line. The person who e-mailed me lives on Thompson St., not far from St Anthony’s. With electronic poll books, there is no reason people couldn’t vote anywhere.”

The issue also came up at the Community Board 2 meeting last Thursday. Carter Booth, the board’s chairperson, noted that for him to get to M.S.G. is a 28-block, 15-minute walk, which is not exactly a “user friendly” way to vote.

Bob Gormley, the C.B. 2 district manager, said his understanding was that two election districts may have “had their numbers changed” and so somehow got lumped in with the Garden poll site.

By the end of Sunday the B.O.E. reported 193,915 votes had been cast throughout the five boroughs. That number could rise significantly since, Barry noted, the polling sites also served as drop-off locations for absentee ballots. Nationwide more than 57 million people have voted early.

Early voting will continue daily through Sun., Nov. 1, with Election Day on Tues., Nov. 3. For information on early voting days, times and locations, go to https://vote.nyc .