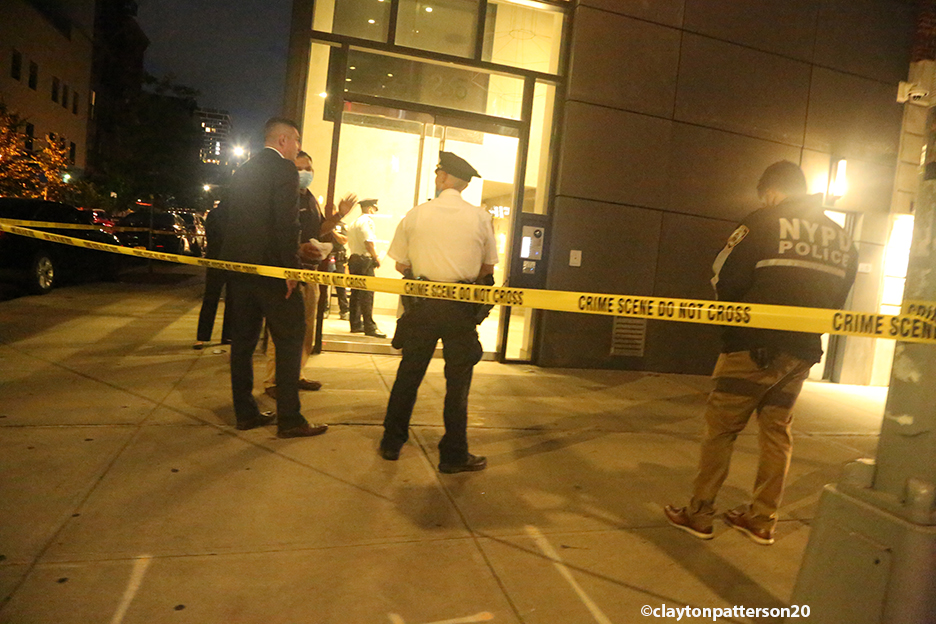 Police outside the crime scene at 265 E. Houston St. on Tuesday night. (Photo by Clayton Patterson)

A resident of a Lower East Side luxury building was found dead in his apartment Tuesday — with his head and his limbs chopped off.

Police said that on July 14, around 3:35 p.m., officers responded to a call of a “past assault” inside 265 E. Houston St., near Suffolk St. At this point, police are only saying publicly that they discovered an unconscious and unresponsive male at the scene and that E.M.S. subsequently pronounced him dead.

However, the New York Post reported grisly details: that the victim was decapitated and that his arms and legs below the knees were removed, and that body parts were found in plastic bags inside the apartment; an electric saw was also reportedly found near the body of the victim, said to be a 34-year-old man.

According to the Post, sources said the victim was the owner of a Nigerian motorcycle-sharing company.

“Police were later seen questioning a sobbing woman — who sources identified as the victim’s cousin — in the lobby of the building,” the daily tabloid said.

A police spokesperson told The Village Sun that a relative had discovered the body, and then let responding police into the apartment when they arrived. He said the medical examiner will determine the cause of death.

Police said they are not releasing the victim’s name yet, “pending proper family notification.” It’s possible they may be trying to get in touch with his parents, for example, to let them know first, before releasing his name.

The 10-story building opened in May 2017. It sports seven two-bedroom apartments, some of which were going for roughly $2.5 million back then. There is also a three-bedroom duplex.

The site was formerly occupied by a Pentecostal church. Demolition of the house of worship in 2010 destabilized an adjacent building, forcing a daycare to vacate its space.