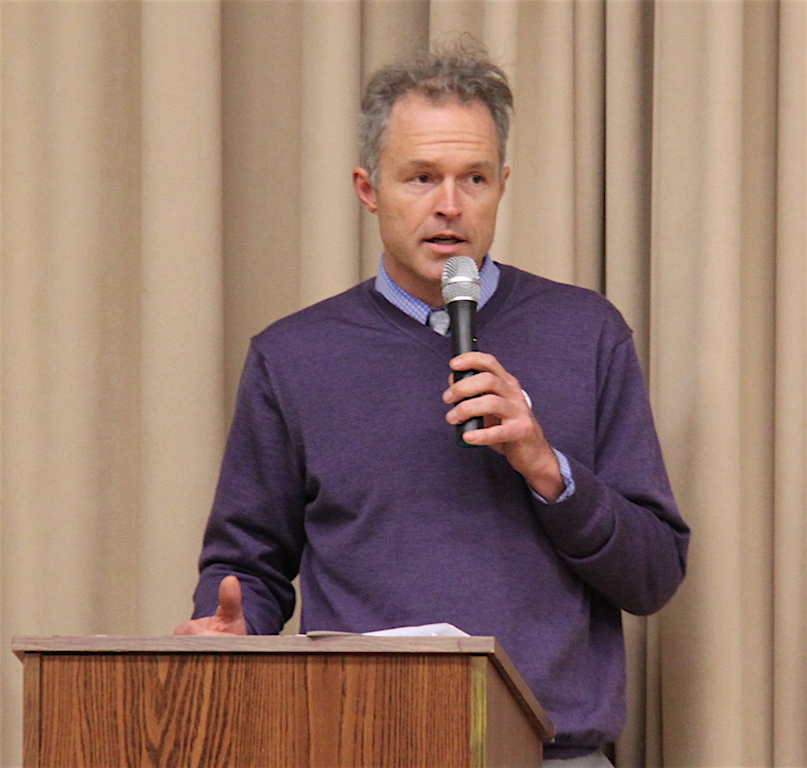 On April 5, Harry Bubbins left Village Preservation (Greenwich Village Society for Historic Preservation), where for the past five years, he served as the director of East Village and special projects. He said he stepped down due to “family stuff in the end really, nothing of news or any issues.” The Village Sun asked him to recap some of the major initiatives and successes he was involved with during his tenure there.

BY HARRY BUBBINS | It was great to be a part of the Village Preservation team of trustees and staff and members and wider community.

In many ways, the job that I held is a dream position for the right person.

A key part of the work was to continue to expand the conversation and show how preservation is compatible with affordability: Upzoning in no way equals equity.

We worked to draw attention to and demand action on small- and large-scale initiatives alike. We drew attention, for example, to the uncared for status of the Yiddish Theater Walk of Fame and the need to return CHARAS/the old P.S. 64 to community use and try to get action from the city to acquire it and prevent what seems to be multiyear case of demolition by neglect.

I was proud of working to help to protect, preserve and aid the creation of more small independent businesses with the widely supported East Village Special Retail District, which would restrict chain stores that siphon monies out of local communities; hopefully, this initiative will continue to move forward in the process.

A victory was stopping the oversized tech office on St. Mark’s Place that would have further increased the commercial development pressures driving out existing residents and leading to the loss of architectural character and the uniqueness of place that makes the East Village what it is.

I enjoyed getting to meet and interview and support small business owners, from Mikey’s Ice Cream and Casa Adela and the East Village Vintage Collective on the East Side to Feast On Us and Love Child on the West Side and the quintessential Village anchor The Chess Forum in the South Village.

Another important part of the job was research and involvement in a number of reports to correct the misinformation of the real estate industry and the current administration that often prioritized the agenda of the mayor’s donors at the expense of local community plans and voices.

We debunked the REBNY (Real Estate Board of New York) game of blaming storefront vacancies on landmarking, rather than, say, exorbitant commercial rents, with real data.

We exposed the pay-to-play culture of the administration after filing Freedom of Information Law requests and reviewing more than 1,000 pages of documents to show how a political contributor’s proposal was picked to develop the controversial Tech Hub on a city-owned property over proposals that both provided more community space and more revenue to the city without a massive upzoning.

Lately, I was working to expand the conversation to include the impacts on Chinatown from the administration’s proposed Soho/Noho upzoning plan, which does not guarantee any housing whatsoever, let alone anything affordable to local residents. We provided real data on the socioeconomic character of the current residents and identified hundreds of rent-stabilized units that would be under pressure from displacement and demolition if the current proposal is approved.

The mayor’s Soho/Noho plan clearly would lead to a less racially diverse and more economically stratified neighborhood. This is in direct contrast to the misrepresentations of his administration and the well-meaning but not factually based sentiments of people sympathetic to the stated goals of the mayor’s spin team, but who do not really look into the issue closely and instead rely on real estate industry-ally talking points.

Another critical initiative was working to educate about and elevate the Save Our Storefronts legislative and budget agenda to prioritize support for small businesses at the local and state levels.

Like everywhere, it is important work to remind and hold elected officials accountable to maintain their commitments to represent the people and not special interests since they are elected to work for the people.

We organized and convened diverse voices from across the city for an event, Community Planning and Rezoning in Today’s New York, at N.Y.U. Law School, centering communities that have crafted their own rezoning plans or are in the process of formalizing their visions. Participants shared their views and experience at a panel discussion that included representatives from diverse neighborhoods across New York City, including Save Harlem Now!, Northern Manhattan Not For Sale, Coalition to Protect Chinatown and the Lower East Side and more.

Another fulfilling part of the job was working with home and property owners to place plaques to honor and recognize important history. We marked, for example, the home of Alex Haley, where he interviewed Malcolm X, with a dedication that included both of their families, and installed a plaque in Noho to honor women in health and medicine where Elizabeth Blackwell and her sister opened the Infirmary for Women and Children.

It was a fantastic experience to work with a great organization and team in some of the most diverse, eclectic, creative, fun and engaged neighborhoods in all of New York City.