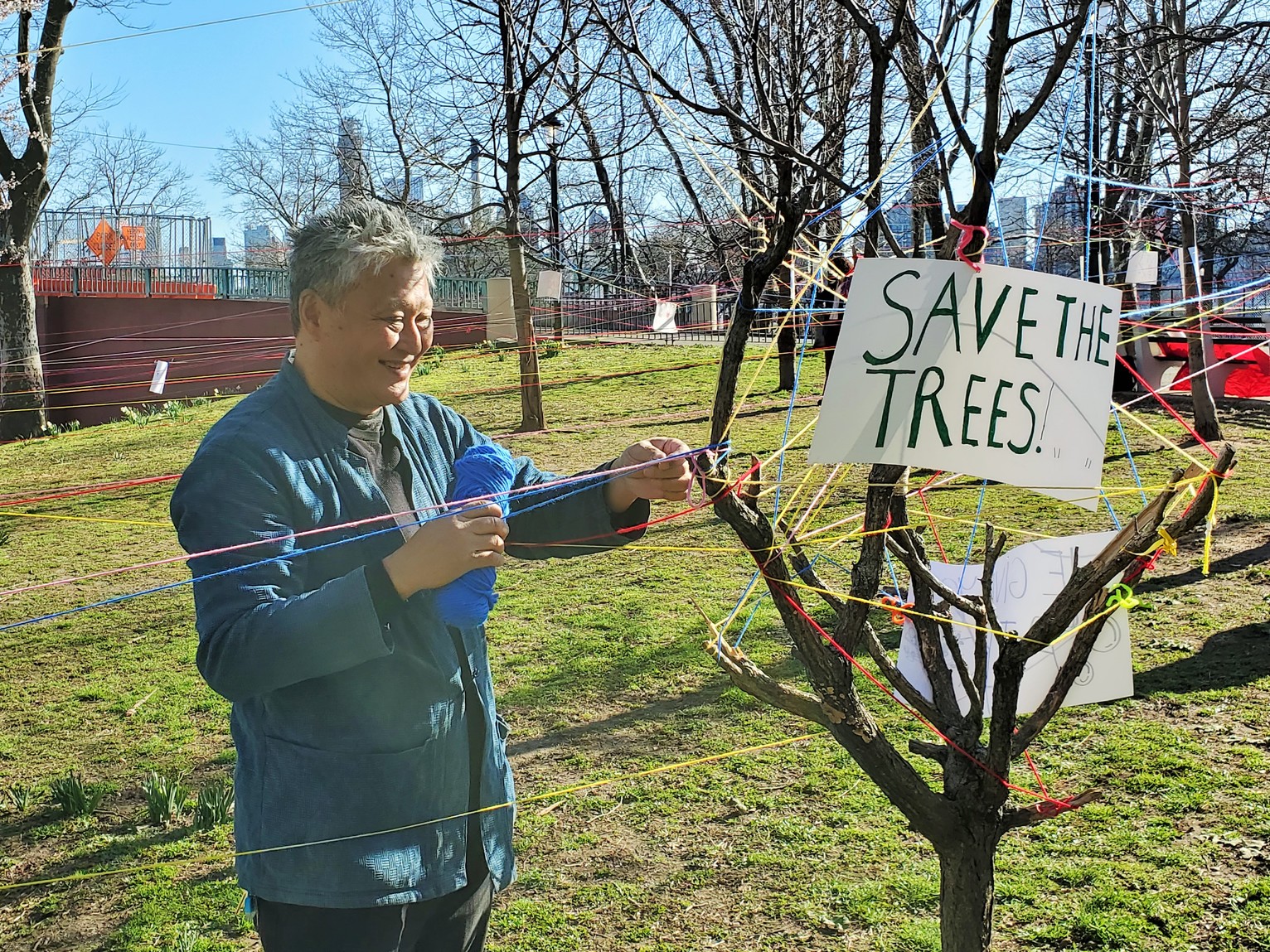 George Hirose created an "art intervention" in Corlears Park, where hard hats were expected to descend Monday to start the destruction of 30 to 60 cherry trees. (Photo by The Village Sun)

Hanging on by a thread: Park activists make their stand at Cherry Hill

BY THE VILLAGE SUN | Updated Mon., April 4, 1 p.m.: George Hirose knew the colorful yarn he was stringing between the flowering cherry trees in Corlears Hook Park on Saturday wouldn’t stop the destruction the city would be bringing to the bucolic spot Monday.

“It might slow them down a couple of minutes,” he shrugged.

A Pratt photography teacher, he lives in Stuyvesant Town now and has been living Downtown since the 1970s. Although the cherry trees’ fate seemed sealed, he felt it was important to try do something for them, hence the yarn matrix.

“A lot of people are resigned,” he said. “That’s the biggest enemy, apathy.”

An hour earlier, park activists had formed a circle on the lawn, each one in turn sharing his or her feelings about the ongoing obliteration of the more than 80-year-old East River Park for a coastal resiliency project that will raise it up to 10 feet. Some of them openly sobbed.

Katherine De La Cruz, a young dancer and activist from Flatbush, Brooklyn, told The Village Sun she felt very strongly about East River Park because, during the pandemic, she came to its amphitheater to dance.

“There was nothing to do but go to the park,” she recalled. “When there was no room for movement, I used the band shell.” The Depression-era structure’s loss, she added, “has been really hard for artists.”

De La Cruz scoffed at the city’s plan to raise East River Park, predicting it will just turn the F.D.R. Drive into a flood-prone “trench.”

Joan Reinmuth, a stand-up comic, warned that the biology of the city’s $1.45 billion megaproject is simply ill advised.

“You forgot your photosynthesis,” she stressed. “A mature tree will give you 60 cubic feet of pure oxygen per day. These are hard-working trees.

Rita Pollack, 93, a World War II refugee who has lived in nearby Gouverneur Gardens for the past nine years, fatalistically said that the protesting is not going to help.

“The minute the court said it was O.K., the next day they cut the whole park,” she recalled. “This is de Blasio corruption.”

She was referring to how the administration started destroying East River Park’s southern half in December, as part of the two-phase, multiyear project.

As for why the city feels it has to cut down the trees on Cherry Hill, it appears to be a mix of a few things, as the park activists tell it. First, the city wants to replace the existing Corlears Hook footbridge with one that can support vehicles — which doesn’t exactly seem to be in line with the idea of climate resiliency, they noted. Also, the city wants to add a new drainage system to help fight coastal flooding, as well.

The cherry trees only started to bloom last week.

“Can you imagine that they’re going to come here and cut this down,” asked Sarah Wellington, “these cherry trees in full bloom?”

Wellington had copies of a tree-work permit authorizing the felling of 630 trees in East River Park. The activists had individually written on them in crayon and marker, one of them slamming the arborist who signed off on it as a “bastard.”

The activists planned to show up Monday at 8 a.m. to protest the start of the area’s clear-cutting. As expected, when they did, they were met by a force of police officers and Park Enforcement Patrol officers.