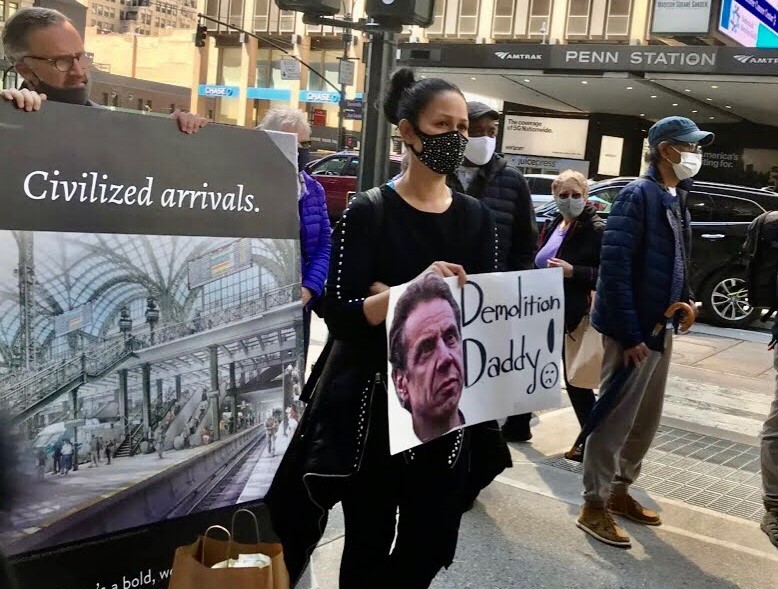 Marni Halasa at an April 7 protest against Governor Cuomo's plan for major development in the blocks around Penn Station. (Courtesy Marni Halasa)

Marni Halasa, a candidate for Council District 3 (Greenwich Village/Chelsea/Hell’s Kitchen), attended a protest earlier this month organized by Human-Scale NYC and other transit groups to criticize Governor Cuomo’s Empire Station complex plan to build 10 skyscrapers, allegedly to fund Penn Station’s redevelopment. The April 7 protest came a day after the state budget was released, with some attending the demonstration pleased that the final language limited the use of the state’s $1.3 billion appropriation to “transportation improvement projects,” and specified that it cannot be used for “above-grade development.”

Halasa, however, is still skeptical. Although the budget restricts billions in state funding from going toward building the 10 massive towers, including one super-tall structure dubbed “PENN 15,” the language is still vague and could still benefit the developer, she said.

“Yes, the language seems to prohibit the state subsidy of the skyscrapers,” Halasa said. “But other parts of the budget still allow for flexibility in the definition of ‘Penn Station Access’ in the M.T.A. capital plan — and flexibility often means loopholes that developers can use. This is the same process that gave us Hudson Yards. And the same politicians that lamented Hudson Yards were present and smiling at its ribbon-cutting ceremony.”

“Development that destroys people’s homes, livelihoods, jobs, places of worship and the fabric of our neighborhood is the definition of violence,” Halasa declared. “It is so irresponsible and is so destructive to New Yorkers, it must be stopped.

“The answer is community-driven development, with the community having final say in land-use decisions,” she said. “Genuine community leaders, stakeholders and residents need to be at the table. This at least could level the playing field between communities fighting against the governor’s or the mayor’s bad development proposals. If I am elected, I would hold City Council hearings to determine what a ‘binding community decision’ looks like. If we had such a structure in place, one that returns power back to the people, can you imagine what our city would look like?

“The Chinatown/Lower East Side community and residents living around East River Park came up with their own plans, only to be ignored by the city, with the city acting in bad faith after it had made it seem like it would work with those communities,” Halasa added. “Also The Village Sun’s recent article on the Soho rezoning made it clear how real estate interests were the driving force behind the idea to rezone in the first place. So this is why we need true community-driven development.

“We need a mechanism to give the community final say in land-use development,” the candidate added. “This can include the community board, but also must include other voices, like residents, who are independent of those groups that often have a financial interest to gain, are political appointees of Corey Johnson and Gale Brewer on the community boards and are aligned with real estate interests — even if they don’t appear to be.”