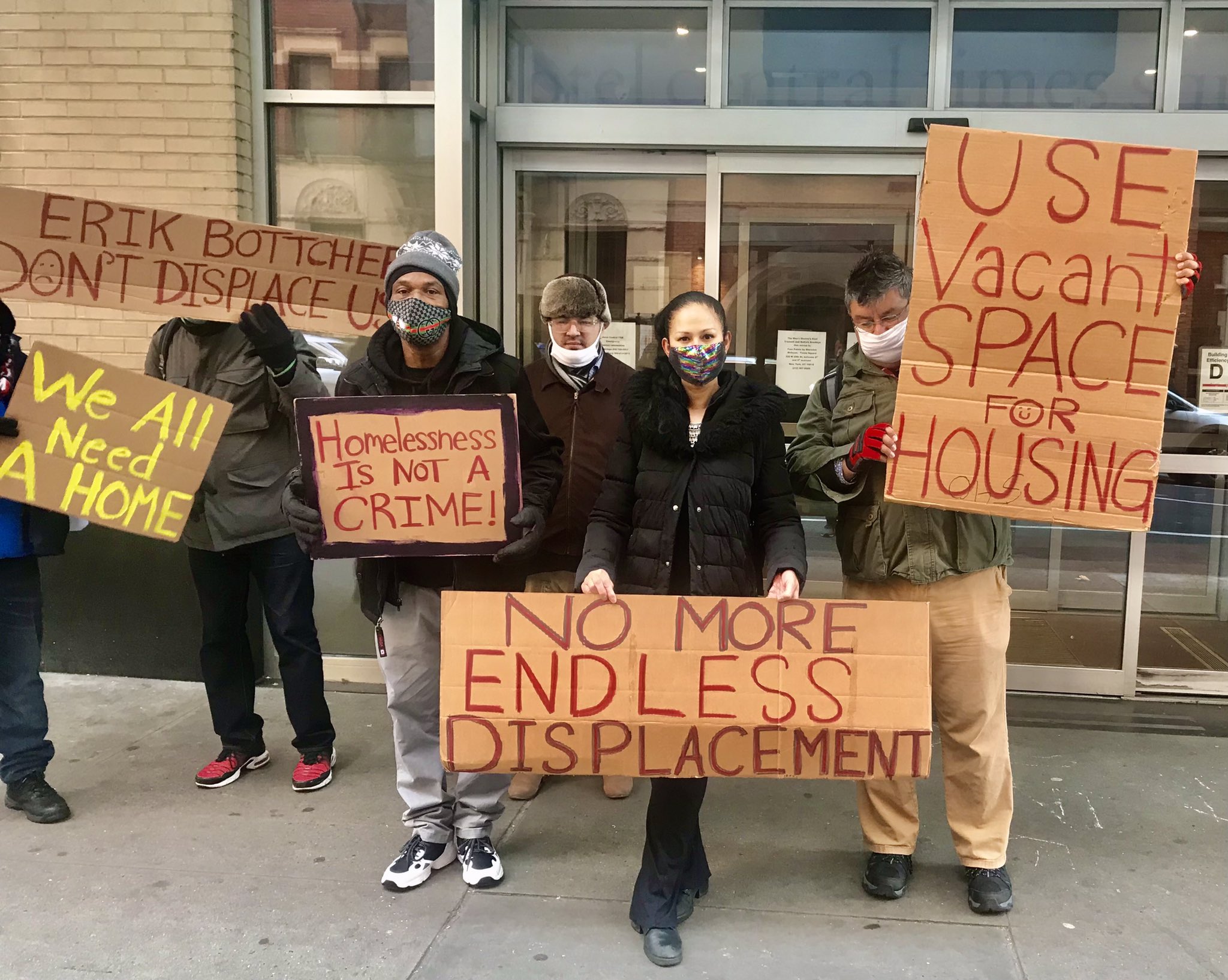 Marnia Halasa, center, and shelter residents rallied on W. 36th St. to protest the men's being shuffled to another hotel a few blocks away. (Courtesy Marni Halasa campaign)

Halasa had rallied with the homeless men in early December. But the city recently announced that it would be closing the men’s shelter at the Hotel Central Times Square, formerly the DoubleTree Hotel, at 341 W. 36th St., and moving its residents to another hotel just a few blocks uptown.

Community Board 4, the Hell’s Kitchen Coalition and Manhattan Borough President Gale Brewer had called for the de Blasio administration to “de-densify” W. 36th and W. 37th Sts. between Eighth and Ninth Aves. They charged that because there were too many homeless men in one area — being housed in three hotels — it was causing quality-of-life issues for the surrounding neighborhood. There was also negative press about homeless men fighting and peeing on the street and using drugs.

However, Halasa said that the city’s “endless displacement” of the homeless men only leads to a “cycle of abuse.” Instead, she said, now is the perfect time to permanently house this population by residentially converting hotels and office buildings left empty by the pandemic.

Halasa also again blasted Erik Bottcher, another contender for the District 3 seat. She said her rival, who was formerly Council Speaker Corey Johnson’s chief of staff, helped relocate the homeless men staying in another Hell’s Kitchen hotel, the Washington Jefferson Hotel, at 318 W. 51st. St., to the Hotel Lucerne on the Upper West Side.

“Anyone who has a hand in displacing the vulnerable homeless is not fit to lead our district,” Halasa said. “Perpetuating an endless cycle of trauma shows a callous insensitivity to the real conditions that our underserved people of color experience, and the lack of a moral consciousness. That’s not leadership.”

Bottcher previously did not respond to a request for comment on Halasa’s accusation about the Washington Jefferson Hotel. The Village Sun is reaching out to him again for comment.

The city, in fact, has been using the empty hotels to house the homeless during the pandemic. The reasoning is that it’s safer for the individuals to be in hotel rooms versus congregate shelters, where there is less opportunity for social distancing. However, the hotels are temporary, not permanent, housing.