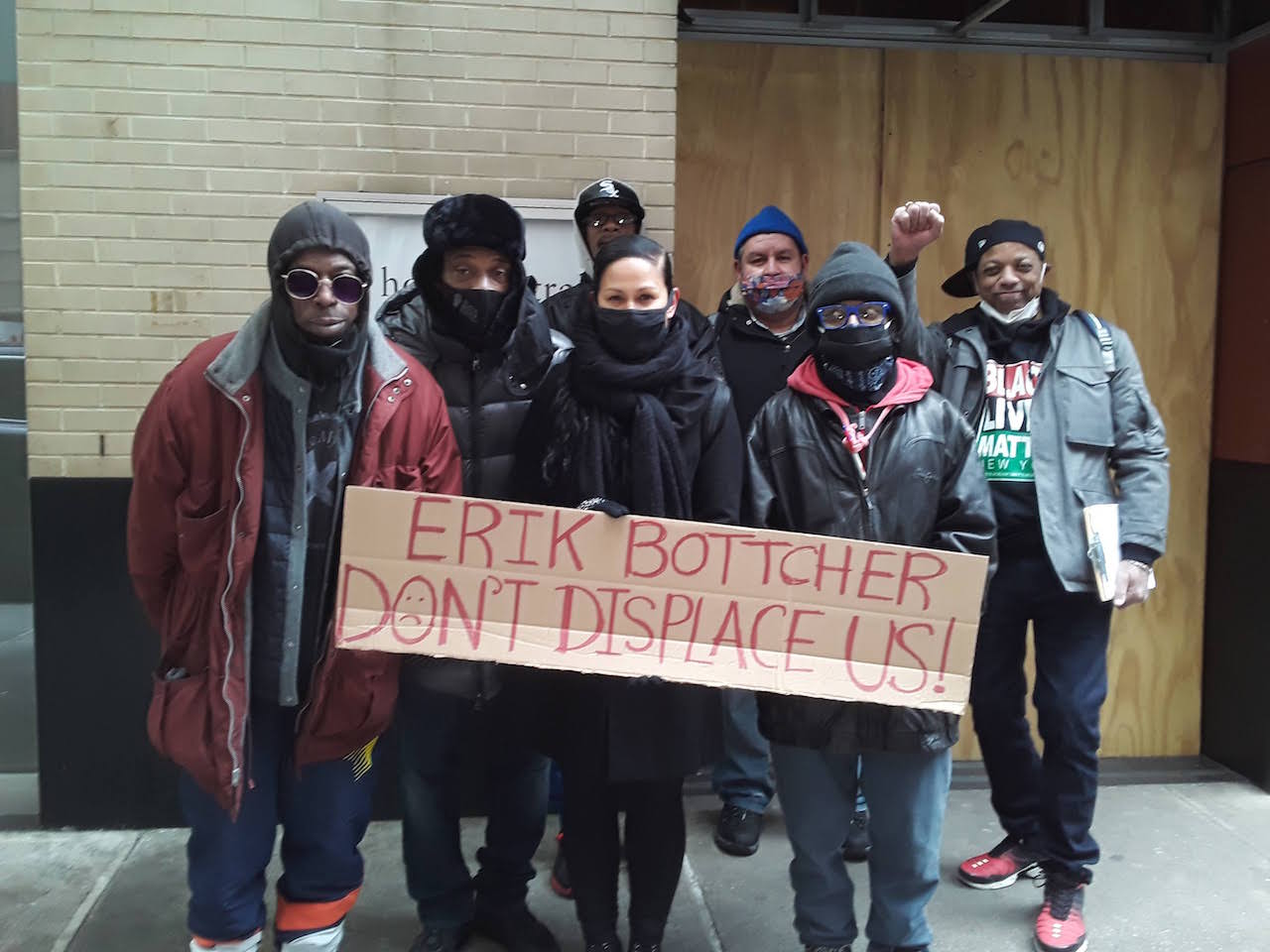 Marni Halasa with homeless residents of the Hotel Central Times Square on W. 36th St. (Photo by The Village Sun)

BY THE VILLAGE SUN | Stop the shuffle!

That’s what a group homeless men living in a Hell’s Kitchen hotel — though facing possible relocation to another one in Lower Manhattan — cried in front of the place last week, joined by a City Council candidate.

Marni Halasa, a contender for District 3 in the June 2021 Democratic primary election, organized the press conference on Dec. 8, a brutally cold day, across the street from the Hotel Central Times Square (formerly a DoubleTree hotel), at 341 W. 36th St. The building is currently operated as a temporary shelter hotel; but there’s a chance the men could be shifted to a new address — a move Halasa denounced as misguided and also harmful to the group.

The candidate and the men said what is needed is permanent housing, not a rotating tour of temporary hotel rooms.

NY1 ran a segment on Dec. 3 about the situation on W. 36th St. between Eighth and Ninth Aves., where the city is housing homeless males in two hotels across the street from each other. It’s that segment that is being cited as the cause of the latest potential relocation.

During the pandemic, the city has moved homeless individuals into empty hotels, which are better for social distancing than congregate shelters. Along with a third hotel one block north being used for the same purpose, there are currently 819 homeless men living on these two blocks of W. 36th and W. 37th Sts.

The NY1 segment featured video clips of brawls in front of the Hotel Central Times Square and a man exposing himself on the street, plus a shot, taken through a window, of another man sitting in his room and injecting himself with a hypodermic needle.

In response to complaints from the Hell’s Kitchen Neighborhood Coalition, an ad hoc group, both Community Board 4 and Borough President Gale Brewer are now calling for the men to be moved out of at least one of the hotels to “de-densify” the homeless clustered in the area. But Halasa and the others at the press conference said the only real answer is to provide real housing for the men.

One of the men said City Hall is to blame for not working to get them permanent housing. Gregory Richardson said he’s been living at the Hotel Central Times Square for a year and a half, but badly wants to get out and land a permanent home. He said he actually has a government-issued voucher to cover his rent, but can’t get anyone in city government to help him take the needed steps to put it to use.

Holding out his computer tablet for a reporter to see, he showed an apartment listing he liked that was in his price range.

“I need to get out of this place,” he said, in frustration.

Richardson has a spinal issue, so he sometimes uses a wheelchair. Men at the hotel live two to a room, though if they’re lucky, they have a single.

“The hotel itself is beautiful,” he said, though added that the building’s strict curfew is hard to abide.

The men don’t know if they will be the ones who are moved to another hotel, reportedly down in the Financial District.

“Shuffle — we call that the shell game,” interjected Michael Weatherspoon.

The men also noted that the guy shown on NY1 with the needle in his arm could have been injecting insulin.

Halasa said that displacing the men would merely be “perpetuating abuse.” Instead, she offered a simple — or at least simple-sounding — solution.

“Take abandoned hotels and vacant buildings and repurpose them for single-room occupancy with permanent leases,” she said. “This is like the time to solve the homeless crisis because there are empty spaces, instead of treating the homeless like a political hot potato.”

S.R.O.s typically have shared bathrooms and kitchens. She said these buildings should also provide supportive services for the formerly homeless tenants.

Halasa also took Erik Bottcher, one of her primary-election opponents, to task for reportedly helping engineer the move of homeless men from another Hell’s Kitchen hotel up to the Hotel Lucerne on W. 79th St. The Queens Eagle reported that Council Speaker Corey Johnson and his staff, including Bottcher, helped broker the July move of homeless men from the Washington Jefferson Hotel, at 318 W. 51st St., to the embattled Upper West Side hotel.

“Public officials, such as Brewer and Bottcher, should focus on truly solving the problem of homelessness by supporting government policy that provides permanent housing to people living in shelters,” Halasa said. “Regarding controversial media speculation about violence, drug use and public urination, what that shows us is that shelter hotels do not provide indoor community spaces or enough supportive services, like detox or 12-step programs. We also need to fight for open bathrooms as much as we fight for open streets.”

Bottcher did not respond to a request for comment on the relocation of homeless men from the Washington Jefferson Hotel to the Lucerne this past summer.

Halasa said a solution will come — but from an “outsider,” like her.

“The main thing is no one is doing anything for these guys,” Halasa told The Village Sun. “It’s going to take someone like me, from outside of the establishment to address this.”