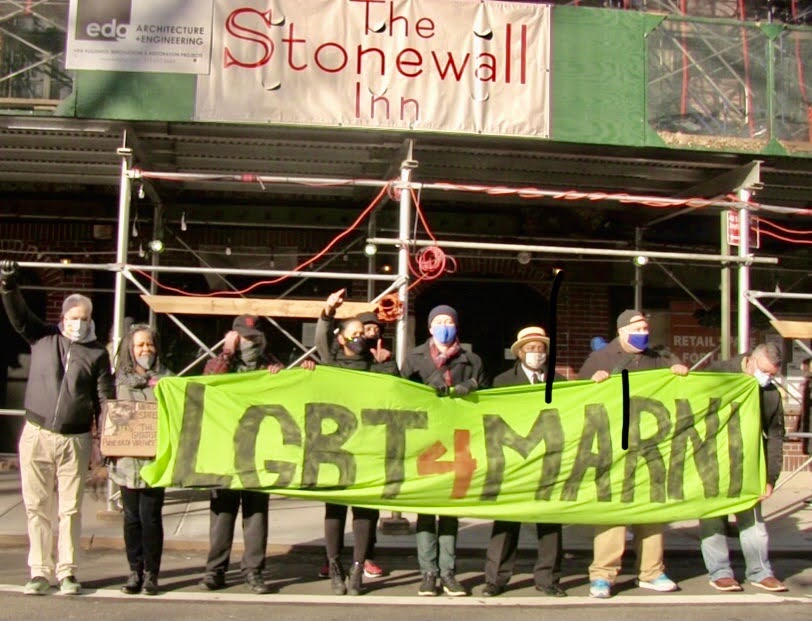 Marni Halasa, fourth from left, and supporters at the MLK Day event outside the Stonewall Inn. (Courtesy Marni Halasa)

BY THE VILLAGE SUN | Updated Jan. 26, 5:45 p.m.: Calling it “a hotbed of corruption,” Council candidate Marni Halasa is demanding the elimination of the New York Police Department’s Vice Unit.

She made the announcement at a campaign event outside the Stonewall Inn, on Christopher St., on Martin Luther King Day.

The Stonewall, of course, was the site of the infamous raid by Vice Unit cops in the summer of 1969 that saw drag queens and gays for the first time fight back, sparking the modern-day gay-rights movement.

At a press conference on MLK Day, Marni Halasa called for the elimination of the N.Y.P.D. Vice Unit. Her remarks start around 5:45 minutes into the video and run about 5 minutes long. The video is also noteworthy for Ronald Haynie’s recitation from memory of Dr. King’s entire “I Have a Dream” speech — in both Spanish and English — starting at around 22:20 minutes. (Video by Bill Dobbs)

“People of color and the L.G.B.T.Q. community, which are core constituencies of our Council district, know of the nonstop police harassment when it comes to their sex lives or sex work,” Halasa said. “It was the Vice Unit, which was responsible for raids on gay bars leading up to the Stonewall Riots.

“The Reverend Dr. King himself was an ally of the L.G.B.T.Q. community,” she added, “and he was targeted by law enforcement with harassment over his sex life that culminated in a ‘suicide letter’ sent to him by the F.B.I. No law enforcement agency has business extorting people like this.”

“The N.Y.P.D. Vice Unit has engaged in discrimination against trans women, gay men, sex workers and people of color,” Halasa charged. “Recently, Pro Publica exposed the Vice Unit for their ‘collars for dollars’ scam to inflate their overtime. There is no room for any kind of discrimination embedded in the Police Department, and the scandal-plagued Vice Unit is an example that the public needs to push hard to reform our city agencies.

“If elected,” she pledged, “I would introduce legislation calling for the immediate elimination of the N.Y.P.D.’s Vice Squad.”

Halasa is a candidate in the Democratic primary for District 3, which includes Greenwich Village, Chelsea and Hell’s Kitchen.

Activist Louis Flores, Halasa’s former campaign manager, added, “We need to push leadership to defund the Vice Squad: Why is it that when we’ve had years and years gay leadership, like Council Speakers Christine Quinn and Corey, who both had a seat at the table, that still L.G.B.T.Q. communities haven’t gotten relief?”