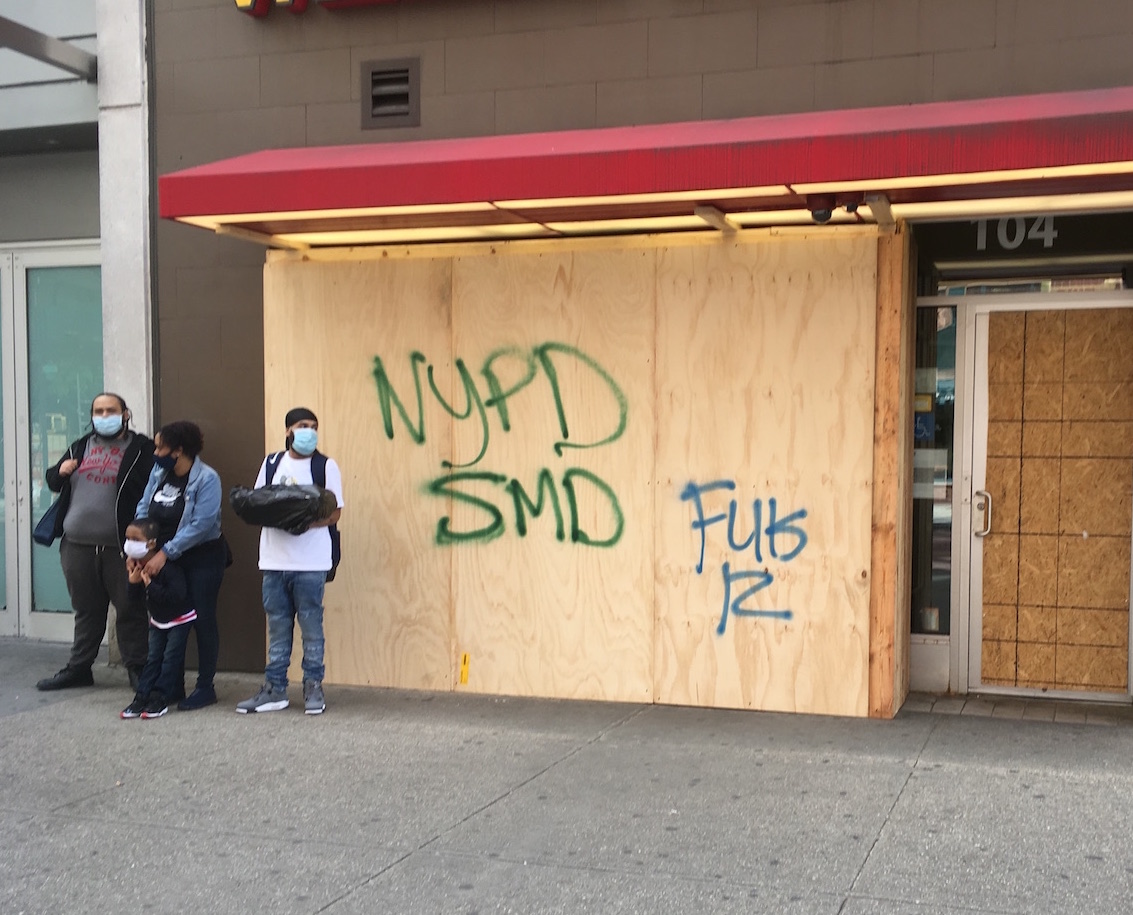 Provocative anti-police graffiti was scrawled on the plywood covering the Wells Fargo bank branch on 14th St. near Fourth Ave. The bank's window was knocked out by protesters Saturday night. (Photo by Rene Cote)

BY THE VILLAGE SUN | After another night of looting and violence in New York City, Governor Cuomo and Mayor de Blasio on Monday ordered a curfew for the city.

Double the amount of police will be deployed to the streets where violence and property damage occurred Sunday night — Downtown Manhattan and Downtown Brooklyn.

According to Police Commissioner Dermot Shea, there were probably close to 400 arrests on Sunday night. High-end Soho stores were looted and vandalized once again, including Chanel and Prada, according to reports.

In addition, Village Sun readers reported seeing stores with broken windows all over Downtown, including several CVS stores — two on Sixth Ave., at Washington Place and Spring St., and the one at 14th St. and Fifth Ave. — as well as the Whole Foods Market at 14th St. and Union Square.

While the Union Square area was a bit calmer Sunday night — without police vans going up in flames — there was still property damage and some looting. Stores whose windows were hit included the Best and Buy and the Walgreens at 14th St. and Fourth Ave. — some looting was reported at the Walgreens — as well as the Coach and Anthropologie stores at Fifth Ave. and 16th St.

“It’s starting to look like hurricane prep in south Florida,” writer Stephen DiLauro quipped of all the plywood being thrown up to protect storefronts.

“I stand behind the protestors and their message, but unfortunately there are people who are looking to take advantage of and discredit this moment for their own personal gain,” Cuomo said. “The violence and the looting that has gone on in New York City has been bad for the city, the state and this entire national movement, undermining and distracting from this righteous cause.

“While we encourage people to protest peacefully and make their voices heard, safety of the general public is paramount and cannot be compromised. At the same time, we are in the midst of a global pandemic which spreads through crowds and threatens public health.”

“I support and protect peaceful protest in this city,” de Blasio said. “The demonstrations we’ve seen have been generally peaceful. We can’t let violence undermine the message of this moment. It is too important and the message must be heard. Tonight, to protect against violence and property damage, the governor and I have decided to implement a citywide curfew.”

De Blasio also said that “swift action” will be taken against police officers for any misconduct during the protests.

The New York Post reported that those exempted from the curfew include essential workers, the press and the homeless, according to a City Hall source.

However, Commissioner Shea earlier had expressed skepticism the curfew would work since he doubts people will respect it, the Post reported.

The mayor’s daughter, Chiara, was among those arrested Saturday night among a group of demonstrators who were blocking the street near Union Square at 12th St. and Broadway. De Blasio said he fully supports her right to peacefully protest.

Speaking to Nicolle Wallace on MSNBC’s “Deadline” on Monday, Cuomo stressed that President Trump and other forces are trying to shift the focus of the George Floyd protests to the mayhem — but that a curfew is, unfortunately, now called for.

“There’s no doubt that what the president’s trying to do here is turn the attention to the looters rather than the point of the protest, which is genuine outrage,” Cuomo said. “You look at what happened with Mr. Floyd, you have to be outraged. It’s not just Mr. Floyd in an isolated situation, it’s been years and years of the same situation. You can go back to Rodney King, Amadou Diallo and Eric Garner — it’s a long list.

“They want to make this about looting and criminals rather than the killing,” he said. “In New York, we did have large protests and we do have people who are, I think, exploiting the protest. There’s no doubt that there’s some people who came out and did looting and criminal activity. You have some disrupting organizations that are seizing upon the moment. We want to make sure that order is maintained and we’re putting in place a curfew. …

Cuomo said he also worried about an uptick in coronavirus infections during the protests with their lack of social distancing, after the city had been doing a good job of bringing the rate down.

“I am afraid that these protests actually can increase the spread of the virus,” he told Wallace. “I would be surprised if it doesn’t. … Hopefully, the infection rate is down so low that people are not spreading it. We are starting to reopen New York City a week from today.

“If the infection did spread, you won’t see it for about two weeks,” Cuomo noted. “I just hope it doesn’t compound the situation because so many New Yorkers worked so hard to get here. So many gave their lives to get here. I hope we didn’t endanger it with these protests.”

The governor also said that economic hardship — only worsened by the COVID crisis — is helping fuel the disorder.

“There are forces coming together here, let’s be honest,” he said. “It’s not a coincidence that this is in the middle of the COVID crisis. The poor paid the highest price for this COVID situation. They were essential workers, their communities had a higher infection rate. They’re living in public housing. You can’t socially distance on an elevator in public housing.

“They were living paycheck to paycheck and now they’re destitute. They paid the highest price. They always pay the highest price. It has just exploded the blatant injustice and racism in this nation. I said today, my father did the ‘Tale of Two Cities’ speech in 1984 at the Democratic Convention. It was true then, it’s true now. Let’s make this a moment of progressive reform and focus on a real agenda going forward.”

Meanwhile, Police Commissioner Shea said that a “groundswell” of faith leaders and others speaking out against the looting and violence has had an effect.

“I saw increased, again, numbers last night of New Yorkers of every faith, of every religion, of every ethnicity speaking out against it, that they are not speaking for us,” Shea said on Monday. “I saw many incidents where I was, quite frankly, a little worried that it was going to turn to violent, where people [were] confronting people that are breaking windows on stores, saying that doesn’t help us. I saw a doorman, I saw residents coming down trying to aid, and…we are a significant part of this story, the N.Y.P.D. and law enforcement — but it’s a groundswell [of New Yorkers] that’s going to really end this terrible situation that we’re in the middle of now.”