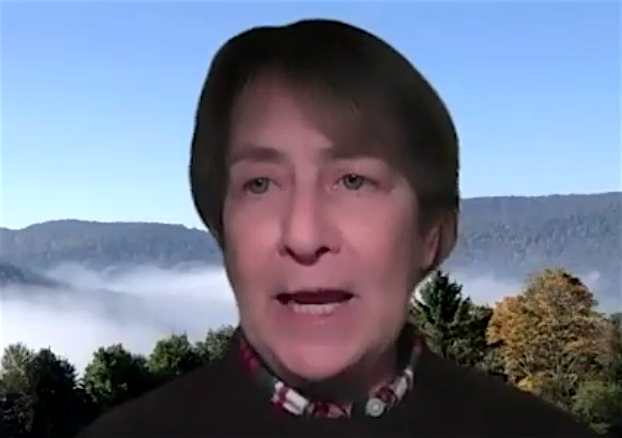 Deborah Glick addressing Community Board 2 on Feb. 18. (Photo by The Village Sun)

BY THE VILLAGE SUN | Deborah Glick thinks Governor Cuomo will likely be stripped of his pandemic emergency powers. And she also thinks writing a book about his handling of the COVID crisis and “taking a victory lap,” as she put it, was inappropriate “hubris.”

The veteran assemblymember spoke about Cuomo’s current predicament during her report at Community Board 2’s full-board meeting last week.

She referred to the widely reported incident where the governor phoned Assemblymember Ron Kim and allegedly warned he would “destroy” his career, after the Queens lawmaker publicly slammed Cuomo over the nursing-home crisis. An uncle of Kim’s died from COVID in a nursing home. Kim also chairs the Assembly’s Committee on Aging.

Kim has since called for Cuomo to be impeached over the scandal, in which the governor, on March 25, ordered nursing homes to take in COVID patients, then withheld data for months on how many nursing-home patients, in turn, died of COVID in hospitals.

Glick declined to weigh in on whether she thought Cuomo actually threatened Kim, though said it would not surprise her.

“I certainly think the governor has a very forceful personality and expects people to go along, and sometimes is too aggressive on people pushing back on him,” Glick said. “Everybody’s had some experience or other [with that]. I think we have to take the emotion out of it.

“I think that the nursing home numbers thing was stupid,” she said. “I think he should have apologized. He should have said, ‘We were trying to do a lot of different things at the same time and we weren’t counting people properly. My mistake.’

“The governor, like a lot of people in politics, can’t say, ‘My mistake.’

“I think there’s a good chance we’ll have to eliminate his powers,” she said.

At that same time, in her view, it was “important and necessary” for Cuomo to have those extra powers — which the Legislature granted him — earlier on during the pandemic. Cuomo’s special powers are due to expire April 30.

Yet, she noted, assuming the governor would no longer be able to decree things by fiat, some things would then need to be legislatively “mandated”; she mentioned, for example, the idea of making wearing face masks mandatory in New York State.

“I believe it’s appropriate for the Legislature to mandate a statewide mask mandate until the C.D.C. says otherwise,” she declared. “I don’t think we should leave that up to the governor.”

Some Upstate counties, like Ulster and Dutchess, currently have a mask mandate while others, like Greene and Putnam, do not, she noted, adding that is not a good situation.

The governor always has some executive authority during any state of emergency, she explained.

“The governor will still have, during a state of emergency, extraordinary powers,” Glick said, “even if we take away the pandemic powers that we gave him.”

Cuomo’s opponents obviously are seizing on the scandal.

“Republicans were looking for something to go after Cuomo on, and there’s this,” she said, “and they’ve gone after it, hammer and tong.”

Some, though, are sensationalizing the story as “political theater,” she added.

Meanwhile, Glick said, even Democrats have had issues with Cuomo in terms of “lack of consultation. It’s hard to get direct communication with Cuomo.”

Trying to put the scandal in some sort of perspective, the assemblymember cut the governor some slack, saying, “It’s been a tough year. In New York, I think we were very fortunate to have someone who was at least trying to do the right thing.”

At the same time, though, she said, “He never should have written a book and taken a victory lap in the middle of it. That’s hubris. I don’t want to get into the Greek tragedy of it — people who have had deaths and lost loved ones in nursing homes.”

Some executive orders that Cuomo has put in place are good ones, in Glick’s view, such as the one allowing community boards to hold meetings and votes remotely.

“We don’t want to throw out the baby with the bathwater,” she said.