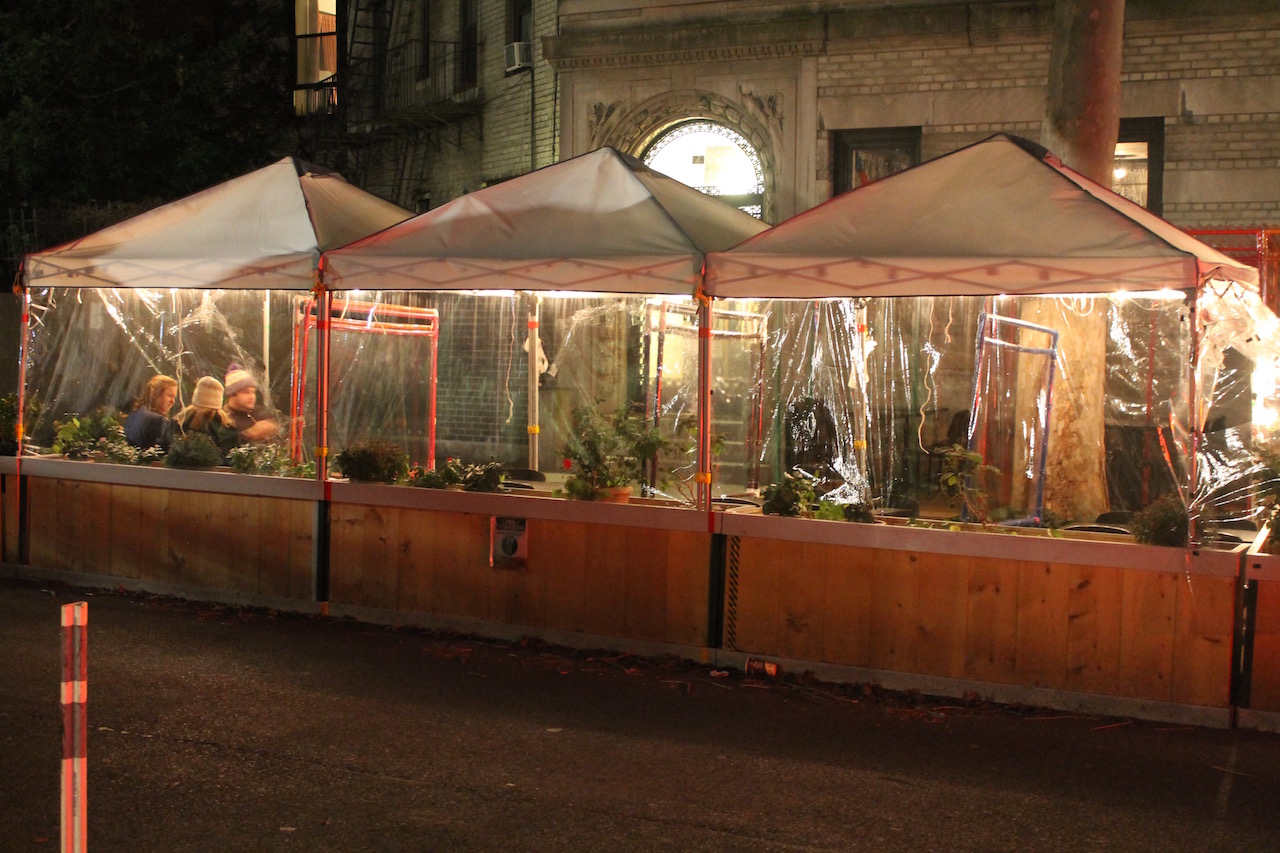 An outdoor dining structure on W. 11th St. near Sixth Ave. (Photo by The Village Sun)

BY THE VILLAGE SUN | The mayor and City Council making the Open Restaurants program permanent without any community review has left a bad taste for Deborah Glick.

On Oct. 30, the assemblymember wrote Mayor de Blasio, Council Speaker Corey Johnson and Polly Trottenberg, the commissioner of the Department of Transportation, to voice her disapproval. D.O.T. is the agency overseeing the pandemic-inspired program.

On top of the lack of public review, the letter cited a smorgasbord of concerns, from the “ceding of public space to private industry” to the danger of propane heaters and streets being made impassable due to outdoor dining structures.

Last month the City Council O.K.’d the program for another year, intending to make it permanent after that.

“While I have supported many emergency measures, including the Open
Streets and Open Restaurants initiative, I am seriously concerned about the way in which unilateral policy decisions are being made without sufficient input from the public,” Glick wrote. “Originally, the outdoor dining program appeared to be acceptable as long as it was temporary and only permissible on an emergency basis. However, it is inappropriate for the City Council to make this policy permanent without adequate public review or debate.”

“Without sufficient review at the community board level or with city agencies,” she wrote, “the City Council would effectively be ceding an incredible amount of public space to private industry. Restaurants serve a purpose and employ thousands of New Yorkers. However, in this instance, the City Council has chosen to ignore potential legal requirements and norms in City government when public spaces are being used for private enterprise. This large-scale, citywide change has occurred without the need for any Uniform Land Use Review Procedure or an Environmental Impact Statement.”

Glick warned that the move could result in business improvement districts gaining even more control over the streetscape than they currently exert.

“New York City has active Business Improvement Districts (BIDs) which already monopolize public space and, at times, make ethically tenuous connections between the public’s money and private business,” she wrote. “I am concerned that the BIDs will have ultimate authority in plazas and squares throughout the city to allocate space for outdoor dining in the future. Because many restaurants are members of BIDs, this would not serve the interest of the local community and may be a conflict of interest.”

Glick further expressed concern about propane and electric heaters being used for the outdoor dining spaces in the cold weather, calling it a potentially disastrous situation.

“The City must prioritize safety as these heaters have open flames and may be under tree canopies or next to the wooden roadway seating,” she warned.

Under rules for outdoor dining recently crafted by the Fire Department, propane heaters can be used on the sidewalk but not in the street.

Glick added that there must be assurances that roadway seating not block ambulances, fire engines, sanitation trucks and snowplows, noting that parts of her district, like Greenwich Village, have narrow streets. Plus, vehicles need curbside access, she stressed.

“Sidewalk accessibility must be considered in this program,” she said, “as many differently abled individuals require Access-a-Ride or cabs with lifts in order to get around the City.”

The politician concluded her letter by assuring that she supports the restaurant industry and would like to see residents continue to enjoy outdoor dining.

“Nonetheless,” she said, “this program should not have been made permanent without public review even in the face of public fear.”