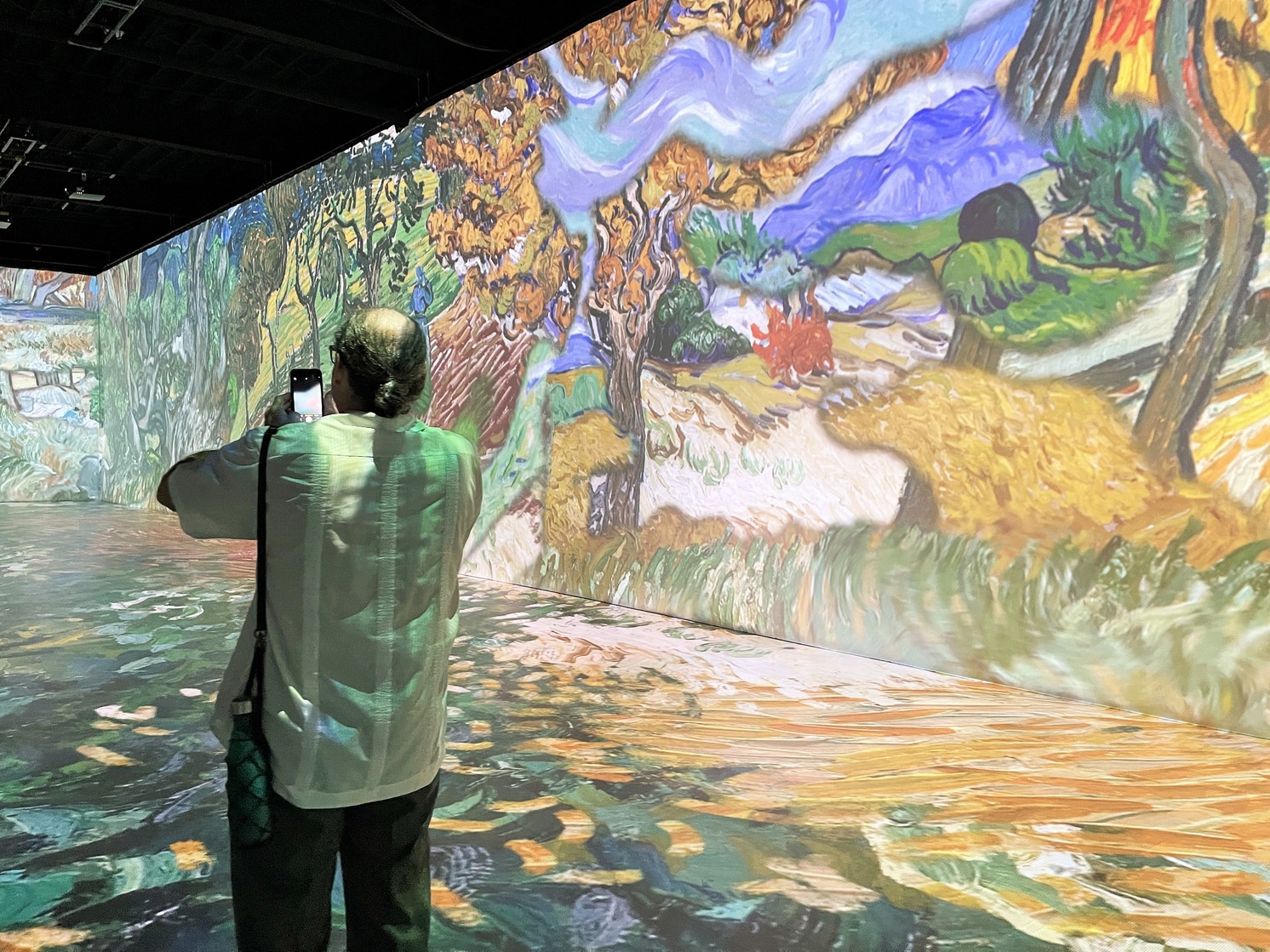 Taking in the "Beyond Van Gogh" immersive exhibit in Miami. (Photo by Gayle Kirschenbaum)

Getting ‘into’ Van Gogh

BY GAYLE KIRSCHENBAUM | When I was in art school, one of the assignments was to copy a master’s painting. I chose one of Van Gogh’s sunflowers. I tried my best to mimic his brushstrokes. I completed my replica that could be easily identified as such. However, this exercise pulled me into Van Gogh and I wanted to penetrate his mind. As I studied and looked at his body of work, I wondered what happened. Here was a brilliant and talented artist who in his short life produced a massive amount of art and died on July 29, 1890, a tortured pauper.

He barely sold any paintings in his lifetime — perhaps one or two. Without the love and financial support of his brother Theo, Vincent wouldn’t have even had the funds for his art supplies.

First coming to painting at the age of 27 after attempts in art dealing, 10 years later Van Gogh had produced nearly 2,000 pieces of art, including 900 paintings. His life came to a full stop, dying at 37 as a result of a self-inflicted bullet wound.

He had been diagnosed with a variety of mental illnesses, including bipolar. In a fit of fury and confusion, he cut off his ear. Some said it was only a lobe while others say it was his entire ear.

As she shepherded his work into the marketplace, Van Gogh posthumously became a star, something he seemed to avoid in his lifetime — a tortured genius who alienated dealers.

A French company developed the first “Immersive Van Gogh Exhibit” in 2008 in Paris. Since then there have been several others in the United States. As Van Gogh’s work is both loved and not copyrighted it has made it easy for for-profit entities to create their own shows. Tickets range from $30 to $70 for adults. With so many Van Gogh fanatics, the price tag doesn’t deter people.

I’m a West Village New Yorker, who has found myself down in Florida caring for my elderly mother. Ads on my devices started popping up for “Beyond Van Gogh,” the immersive experience in Miami. Next came my friends’ postings and direct messages raving about the show and encouraging me to attend. As someone who thrives on culture and has felt starved during COVID lockdown, I hesitated to attend. As a purist, I was concerned about seeing Van Gogh’s work being used in another format.

It took one more text filled with praise from a friend to get me there.

When I pulled into the parking lot at Ice Palace Studio in Miami and stepped into the scorching heat, I was anxious to get out of the sun and into the exhibit. As I walked through the dark curtain, my temperature dropped, cooled by the air conditioning and my eyes opened wide preparing to read the hanging panels. As I snaked through the large space pausing in front of each plaque and devouring the words filled with facts, stories and quotes, my immersion into Van Gogh’s life began.

I could feel myself welling up when I read the following quote from Van Gogh:

“In life and in painting too, I can easily do without the dear Lord, but I can’t, suffering as I do, do without something greater than myself, which is my life, the power to create.”

As an artist myself, who chose my freedom to create over being trapped in a steady job with steady income, I felt an immediate connection to Van Gogh’s chosen path and suffering.

After reading the selected text, we were led into a large room filled with projections of Van Gogh’s paintings. People were scattered, mostly standing taking in the images of his work, which engulfed the room. Some of the painting projections would draw themselves onto the walls. Then other masterpieces replaced them. All the visuals were choreographed and matched a soundtrack that reflected the emotional context.

I felt motionless, as if my feet were planted in cement and I transcended into Van Gogh’s world. It was timeless. Minutes were passing and my head turned around and my body followed to see what was projecting behind me. Van Gogh’s “The Starry Night” enveloped the room.

I thought back to decades earlier in my career, pre-computers, when I designed multimedia shows. We created our projections using film slides, sometimes hundreds of them, programmed to drop into the gate of several stacked slide projectors. At the time, it was spectacular but nothing compared to what Canadian Mathieu St- Arnaud, the creative director of “Beyond Van Gogh,” designed. With the advancement of technology and the talents of Mathieu, armed with the research of art historian Fanny Curtat, they have created a 360-degree experience where we are surrounded by art and sound.

Panels of Van Gogh’s sunflowers paintings wallpapered the walls. Over the panels, animations of the flowers started moving from the walls and continued along the floors beneath us, another canvas used to project Van Gogh’s work.

Although there were plenty of people at the show, each, unless they came together, was spaced apart. Each was in his or her own experience, and many were capturing the visual feast on their smartphones.

Quotes and text were interspersed throughout, taking us into the thoughts and life of Vincent.

“Find things beautiful as much as you can, most people find too little beautiful.”

This exhibit did more than justice to the beauty and expanse of Van Gogh’s work. We traveled to Arles, in the south of France. It was a prolific period for Van Gogh as he loved the countryside he painted with vivid bright colors and thick swirling brushstrokes. We were taken into Van Gogh’s home as we were soon staring at different versions of his “Bedroom in Arles.”

Several self-portraits appeared, including one with Van Gogh’s ear bandaged.

After one hour that passed quickly, it was clear that the show had ended and was starting again. It was time to move on and create space for the newcomers.

I am grateful I expanded my beliefs, opened my eyes and got to experience Van Gogh more intimately than I had ever expected.

Immersive Van Gogh digital exhibits now are available in several cities across America, including New York, Chicago, San Francisco, Miami and Los Angeles. There are actually currently two of these Van Gogh shows in Lower Manhattan: “Immersive Van Gogh,” at Pier 36 at 299 South St., and “Van Gogh: The Immersive Experience,” at 300 Vesey St., both running through through the summer.

Don’t wait. Treat yourself to this experience and take a friend or a loved one.